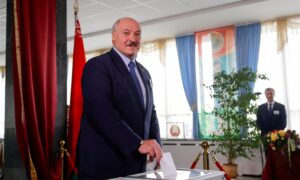 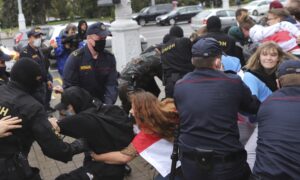 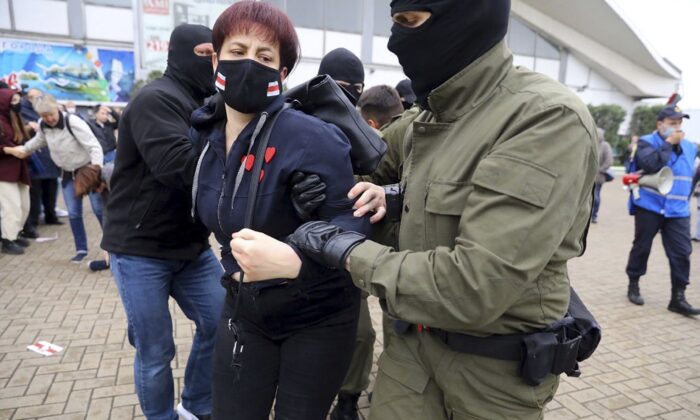 A woman is detained during a rally in support of Maria Kolesnikova, a member of the Coordination Council created by the opposition to facilitate talks with President Alexander Lukashenko on a transition of power, in Minsk, Belarus, on Sept. 8, 2020. (AP Photo)
Canada

In Canada, Calls to Impose Sanctions and Join Allies Against Belarusian Regime

Protests that began in May in Belarus against the authoritarian regime of President Alexander Lukashenko have only increased in size and intensity since the Aug. 9 election, which Canada and many other countries widely perceive as having been fraudulent and rigged.

Widespread unrest since the election has seen at least four people killed, hundreds injured, and hundreds more arrested. Pro-democracy protesters want Lukashenko, who has been in power for 26 years, to resign.

Although Canada may have little leverage in the situation, some say there are certain actions the government can take. One is to support our allies in Europe and to stand up for democratic norms in Belarus.

“Canada has limited interests in Belarus and thus limited leverage with Lukashenko’s regime. Our main interests are the defence of democratic values on the one hand and support for our allies, particularly the Baltic states, on the other,” Balkan Devlen, a senior fellow at the Macdonald-Laurier Institute, said in an interview.

“We, together with our European allies, should make it clear to Lukashenko—and his principal backer in the Kremlin—that violence against democratic opposition and the demonstrators will not be tolerated and that there will be financial and political consequences for doing otherwise.”

In response to Lukashenko’s theft of the election and conduct since then, the European Union has drafted a round of personal sanctions that seek to freeze assets and impose travel bans on 31 Belarusian officials. The three Baltic member states of the EU—Latvia, Estonia, and Lithuania—have already banned Lukashenko and 29 other high-ranking officials.

Some MPs are also calling for sanctions. On Sept. 3, Conservative MPs Michael Cooper and Kerry Diotte and NDP MP Heather McPherson joined a rally outside the Alberta legislature to call on Ottawa to take action.

“The government has tools at its disposal that it can use today. It’s time that the government stopped talking about the possibility of sanctions and started imposing them,” Cooper said, according to the Edmonton Journal.

“Canada will continue to stand with the people of Belarus, and we will work with our international partners to ensure that their voices are heard and that those responsible for undermining democracy and for brutal actions against protestors are held to account,” Champagne said in an Aug. 17 statement.

Amid the clampdown on the protesters, there are reports of torture and abuse of those who have been arrested and detained by the regime. Journalists, particularly those working for foreign media outlets, have also had their accreditation revoked, and two journalists were deported in August.

Maria Kolesnikova, one of Lukashenko’s most prominent opponents involved in the protests, was abducted in Minsk by men in masks on Sept. 7. She is reportedly being held on the border with Ukraine as the authorities attempt to expel her to Ukraine. On Sept. 6, over 600 protesters were arrested following a mass anti-government rally.

Devlen notes that the Baltic states took a “principled and strong stance against Lukashenko’s brazen attempt to steal the election and gave full support to the democratic opposition” despite being more vulnerable to pressure from Russia due to their geographic location.

There has been much concern among observers as to the possible response from Russian President Vladimir Putin, who pledged at the end of August that Moscow would help Belarus with its security. He said on Russian state TV that Lukashenko had asked him to “set up a certain police reserve,” which he has done, adding that it will not be used “until the situation gets out of control.”

Amid the turmoil, there have also been talks of further integration between the two allies. Belarus has been grappling with financial problems, with Russia offering to refinance US$1 billion of Belarusian debt.

“It is not realistic to expect EU or Canada to intervene directly in Belarus … but we could make it too costly for Putin to support a violent suppression of the democratic movement,” Devlen says.

Noting that the current turmoil is not sustainable, Devlen says “Putin will eventually start thinking about letting Lukashenko go to ensure that the opposition would not turn anti-Russian because of his support for the regime.”

“There is no love lost between Putin and Lukashenko. Putin is interested in ensuring that any regime in Minsk is not anti-Russia,” he says.

“So what we can do, together with our European allies, is to push for a negotiated exit for Lukashenko, and the way to do that is to make both Lukashenko and Putin understand clearly that they cannot repress the people’s uprising with force without incurring significant financial and political costs.”