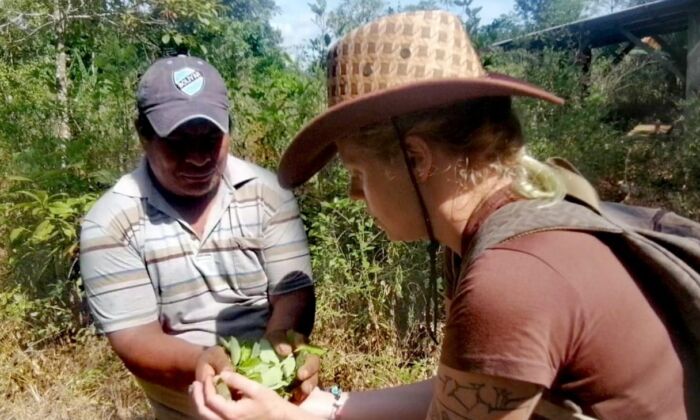 A coca farmer in Bolivia lives in poverty, while others reap wealth from the crop he grows. He and his family earlier suffered persecution at the hands of the police, which, with the election of the socialists, was replaced by what he regards as exploitation by the government.

Agustin Calichu, 60, has been working as a coca farmer since his early 20s on his plantation two miles outside the town of Villa Tunari, located in the Chapare region in the Bolivian Amazon.

Chapare is located in the department of Cochabamba, where growing coca is legal for up to 200 square meters of cultivation per family. Chapare has a history of coca-leaf production for use in narcotics and traditional medicine.

Agustin’s farm comprises a total of 12.3 acres divided between different crops, including coca. His adult son, Victor, met this reporter outside the family’s small, single-story home with a sheet metal roof. Victor Calichu’s wife, three children, and father share the home. The sole vehicle in the dirt driveway belongs to the younger man, who works as a taxi driver in Villa Tunari in addition to helping his father with the farm.

He pointed out a variety of crops grown on his family’s farm, including corn, potatoes, and papaya. After a 30-minute walk through the jungle, Victor Calichu revealed the farthest portion of his family’s land, which is where they grow coca plants. His father was working in the field with a machete.

“We were treated worse than dogs. The police would invade our farms [in Chapare] without a warrant and tie the men down on the ground while beating them. They demanded to know where the drugs were. We were just farmers, we had no drugs,” he told The Epoch Times. “I can’t even speak about what they did to our women.”

A special narcotics task force of the police called the Unidad Móvil Policial para Áreas Rurales (UMOPAR) has operated within the Chapare region since 1983. Due to the high concentration of cocaine trafficking near the town of Chimore, the force began raiding and burning coca farms in the surrounding area, according to Agustin Calichu.

The Epoch Times contacted the office of the Fuerza Especial de Lucha contra el Narcotráfico, which is the narco-trafficking division of the police responsible for UMOPAR, for comment and was told their office is “unaware of any unauthorized action against cocaleros [coca growers]” perpetrated by UMOPAR.

Former minister of the presidency, Carlos Romero, addressed the subject of human rights violations committed by the UMOPAR during a session of the Plurinational Legislative Assembly on March 21, 2019. Romero said that from 1996 to 2005, there were human rights violations committed in Chapare, including 60 people killed and 523 detained. Romero also said that an economic crisis for coca producers followed.

Romero’s address focused on human rights violations against coca farmers during that nine-year stretch, but a former member of the Fuerza de Tarea Conjunta (FTC), which is a military narcotics task force that works in tandem with UMOPAR, claims the illegal burning of coca farms in Chapare was still happening in 2008.

Juan Carlos Siles, 32, was 19 years old when he worked with the FTC in Chapare.

“We shouldn’t have been there. We had no permission, it wasn’t even legal,” Siles told The Epoch Times.

“Some [farmers] would run and some would curse us, but the women would beg us not to burn their coca. I remember Mother’s Day that year, because a woman the same age as my own mother pleaded with us, while crying, not to burn her coca [plants],” Siles said.

Siles said that after three months of working in Chapare with the FTC eradicating coca plants on farms, his unit only found drugs on two occasions.

“We don’t grow drugs. We grow crops. Coca is used for many things, like natural medicine. What we do is legal, but UMOPAR still burned our farm. They burned everything, even the crops that weren’t coca,” Agustin Calichu said.

Victor Calichu said the raids were the reason coca growers began farming deep in the jungle. It made the task of finding coca bushes a challenge.

Agustin Calichu said a silver lining presented itself once Evo Morales, of the Movement for Socialism party (MAS), was elected president in 2006 and the violent police raids on his farm stopped. Morales had been a labor union boss for coca growers. His rise to power resulted in fewer violent police crackdowns on the farmers.

Media reports suggest the MAS has made millions from the sale of coca leaves to drug traffickers. By comparison, the elder man said he gets paid only US$8 to $9 per kilogram of coca leaves he sells to the people who arrive at his farm driving government-issued vehicles.

Agustin Calichu gets paid in cash for the leaves and is usually able to sell his whole harvest in one transaction.

Private sales don’t follow a set schedule, and they can be hit or miss on the profit. However, the farmer feels he can’t complain overall since he only makes US$5 per kilo of leaves when he sells directly to the public markets in Cochabamba and La Paz, where residents buy coca for traditional medicinal uses. But at the end of the day, his family lives in poverty.

“It’s hard to make a living for a family just as a farmer, even when you grow coca,” Victor Calichu said.

When asked how he felt about being paid so little, Agustin Calichu just shrugged. “I want to live in peace with my family. That is what’s most important. I still make more money from my coca [leaves] than I did before the MAS was in power.”

Morales stepped down as president after a disputed general election on Nov. 10, 2019. The MAS party was reelected to power with Luis Arce as president in October 2020. Arce was minister of economy during the 13-year tenure of Morales.