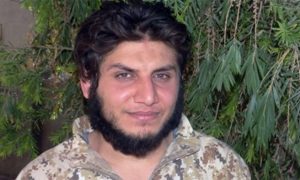 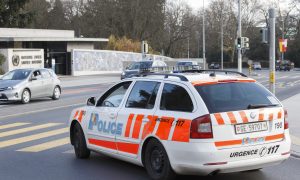 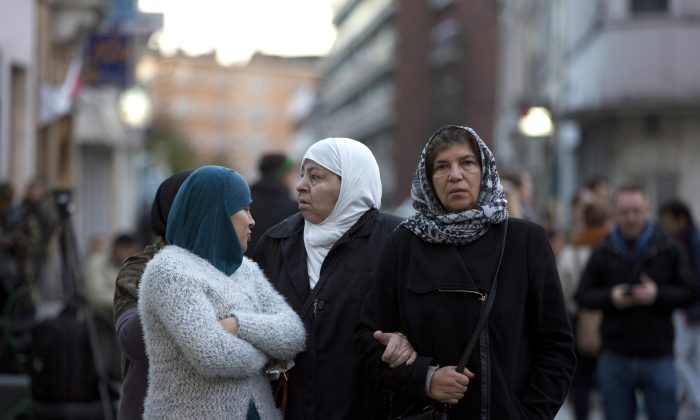 People walk during a candlelight vigil in the town square of Molenbeek, Belgium, on Nov. 18, 2015. Molenbeek was home to a core of the participants in the Paris attacks; its reported architect Abdelhamid Abaaoud and brothers Brahim and Salah Abdeslam. Moreover, those involved in at least two previous attacks, the foiled shooting on a French train and an attack on the Jewish Museum in Brussels all had links to Molenbeek. (AP Photo/Virginia Mayo)
Europe

In Belgian District, Many Feel a Dead End Fuels Militancy

BRUSSELS—Brahim Abdeslam seemed no different from his peers in Molenbeek, one of Belgium’s poorest districts, where drug use is rife and many of the young men are unemployed. One November evening, he passed the time smoking pot in a parked car with two of his friends.

But the next day, Abdeslam drove to Paris, and on Nov. 13 he blew himself up outside a cafe on Boulevard Voltaire, part of the wave of attacks claimed by the Islamic State group that killed 130 people.

The Molenbeek district of Brussels was home to a core number of the participants in the Paris attacks: its reported architect, Abdelhamid Abaood; Abdeslam; his brother, Salah, who escaped and remains at large; and three others. Another suicide bomber in the attacks, Bilal Hadfi, hailed from a similar district in the Belgian capital. Moreover, those involved in at least two previous attacks—the foiled shooting on a French train and an attack on the Jewish Museum in Belgium that killed four—had links to Molenbeek.

Home to generations of immigrants and Belgians of North African descent, Molenbeek feels like a dead end for many of its youth, residents say. With few opportunities, they feel neglected by authorities and rejected by the rest of Belgian society—giving an opening for radicals to seek recruits.

“We are now well into the fourth generation of migrants,” said Sheikh Mohammed Tojgani, the imam of Molenbeek’s main mosque, al-Khalil. “Now even children realize one way or another that they are marginalized and that they are encountering racism. And when older ones look for work, they are not given many opportunities.”

“That is what makes recruiting them easy, because they all have accumulated hatred.”

Militant recruits have mostly been small-time criminals, young idealists and young women from broken homes looking for men who would make reliable husbands, said Johan Leman, an anthropologist who heads Foyer, a volunteer agency in the district.

Molenbeek’s youth speak of bearded men who talk to them about “helping your brothers in Syria,” trying to recruit them to join jihadis fighting in that country’s civil war. A total of 30 Molenbeek residents have left for Syria since 2011, according to Mayor Francoise Schepmans. But youth in the neighborhood say the figure may be much higher.

Zaid, a 24-year-old of Moroccan descent, was with Abdeslam in the car that night. He had known Abdeslam for years in a friendship built over countless nights smoking pot, playing cards or hanging out at the cafe Abdeslam owned in Molenbeek—which police closed down not long before the attacks on suspicion of drug dealing there.

Abdeslam never talked about politics, never spoke in favor of IS or other militants, Zaid told The Associated Press. He also drank beer and gambled—both forbidden in Islam. Zaid showed a short video on his phone showing Brahim and his brother Salah dancing with women in a nightclub in May.

“Like almost everyone from Molenbeek, he was full of contradictions,” said Zaid. “He did not see, or chose not to see, a clash between drinking beer, gambling and praying. He has done all of them simultaneously.” Like many of those who knew the Paris attackers, Zaid spoke to the AP on condition he only be identified by his first name to avoid police attention.

In recent months, Abdeslam dropped some of those habits and started to pray more regularly, but that was hardly unusual. He continued to smoke pot, which is frowned upon in Islam but not explicitly banned.

Molenbeek, separated by a canal from a trendy part of Brussels filled with cafes and restaurants, is the second poorest of Belgium’s 589 municipalities, and in its older quarters, population density reaches four times the Brussels average, with 27,000 people crammed into each square kilometer. A third of students drop out before graduation from its overwhelmed middle schools and high schools. Unemployment runs at 50 percent among its youth. Around 40 percent of residents under 18 live in a household where neither parent works.

When seeking jobs, they confront the stigma of being from Molenbeek, a stigma that has only grown since the attacks. They struggle with questions of identity in a country where they still don’t feel accepted as real citizens.

Shaimaa Belaraby, an 18-year-old who was born in Belgium, says she is proud of being Belgian and feels like a foreigner when she visits her family’s homeland, Morocco. But the teen, who wears a Muslim headscarf, says she feels her Moroccan identity when she steps out of Molenbeek. “They always used to give looks out of the corner of their eye,” she said. “But since the Paris attacks, the looks have gotten more frequent and harsh.”

She told of how one evening not long after the attacks, she went out with friends to the cafe district across the canal. A man walking his dog passed, and when the dog barked, one of her friends screamed.

The man said it was crazy to fear a dog. When she protested, the man said: “You’re right, it’s us who are crazy to have allowed you to come to Belgium.”

Molenbeek’s mayor, Schepmans, acknowledges more must be done for the district.

“Before, we were not careful enough and we did not ask ourselves many questions about the best way to work with the people here,” she told the AP. “Now, we all have to work together to help people here have a better life, but we also have to take security measures.”

Still, there is less money these days to help the poor; in April, the mayor announced a 10 percent cut in spending after the local government racked up a 13.7 million euro ($14.5 million) operating deficit in 2014.

Hadfi, at 20 the youngest of the Paris suicide bombers, grew up in the low-income housing projects of Neder-Over-Heempeek, another district with a sizable immigrant community. The area is home to gangs; graffiti on the walls curse the police; many of the young men have had run-ins with the law.

Samir Youssef Ali, a friend of Hadfi, said he knew three others who went to Syria—one who was killed there, another jailed in Turkey and a third detained in Belgium after returning home. Smoking a joint outside one of Heempeek’s housing projects, the 30-year-old denounced the Paris attacks, but said the young men who join the jihadis are victims as well.

“When authorities say one of us is a terrorist, we say he is the tail and not the head of the serpent—people brainwashed him,” Ali said. “I don’t hate the so-called ‘terrorists’ … and won’t allow anything negative to be said about them.”

Another of Hadfi’s friends, 20-year-old Hakim, said the world of Belgium’s Muslims is bleak.

“In this country, we have no dreams,” he said. “The government does nothing to help us. We want to work, pay taxes and earn an income, but we aren’t offered the chance because we’re Muslims.”

Hakim grew up with Hadfi. “We all shoplifted and committed other petty crimes,” Hakim said.

But Hadfi was the good kid in their crowd. He told his friends not to steal, and they turned to him for help in schoolwork, Hakim said. He prayed regularly but never displayed any sign of radicalism.

In early 2015, Hadfi disappeared, running off to Syria. Hakim and several other friends told the AP they never saw him again, only learning after the attacks that he’d blown himself up outside the Stade de France, killing only himself.

Hakim doesn’t know exactly what led Hadfi to do what he did. But he believes he was drawn out of anger over the victims of Syria’s civil war.

“Trust me, it is not reading the Quran that radicalizes young men here,” he said. “It is the images of dead Syrian children.”