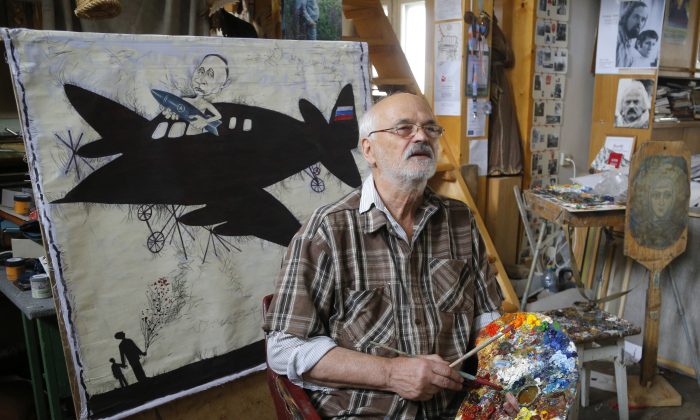 Belarusian artist Ales Marochkin works in his studio in Minsk, Belarus, on In this Monday, Oct. 5, 2015. (AP Photo/Sergei Grits)
Europe

MINSK, Belarus— Belarus’ crippled political opposition has been cautious in its criticisms ahead of Sunday’s presidential election. Not so the country’s underground artists.

Dissident actors, musicians and painters live a shadowy existence in the former Soviet republic, their works seen only in unadvertised performances and invitation-only showings. Still, they have continued to risk jail and press ahead with trenchant views on the two-decade tenure of authoritarian President Alexander Lukashenko.

Lukashenko, who critics call Europe’s last dictator, is sure to win re-election to the post he’s held since 1994. He has shown signs of seeking rapprochement with the West — to counter Moscow’s looming presence and gain access to Western markets to bolster the country’s ailing economy — but artists in Belarus are unlikely to see state pressure on them easing anytime soon.

The state has forbidden many groups from performing altogether and keeps tabs on artists’ whereabouts. Some performances are allowed, but only if they don’t attract much attention.

At home, however, its performances are advertised only by word of mouth. Its directors fled to Britain after a crackdown on the Belarus opposition following the 2010 presidential election. Rehearsals are now conducted via Skype.

“We are creating a free territory for ourselves where we can speak about everything. But freedom in Belarus comes at a steep price,” said 24-year-old actor Alexei Saprikina.

When artists venture out of the shadows, their daring often brings arrests or fines.

Painter Ales Marochkin recently took part in a protest spurred by the announcement that Russia planned to establish a military base in Belarus. The 74-year-old artist unfurled a banner showing a caricature of Russian President Vladimir Putin in a black plane flying over two figures presumed to be Lukashenko and his 12-year-old son Kolya.

The artist was promptly served a court summons.

“I’m now waiting for a call to court, where I’ll be described as the artist Marochkin who appeared at a protest meeting and revealed himself as a fighter for peace,” he said wryly.

The court summons is a much softer alternative than his previous police encounter in 2008, which resulted in Marochkin being arrested and thrown into jail for five days without charges after preparing placards for an opposition protest.

The police’s behavior is a more telling illustration of life in Belarus than any piece of art could ever be, Marochkin said.

Some rock bands show their dissent in more subtle ways. They sing in Belarusian, while Lukashenko and his government use Russian. Some feature the opposition’s red-and-white color scheme, which they adopted after Lukashenko’s government changed the country’s flag to add a green band.

But the bands’ lyrics, however, toss subtle out the window.

Kulinkovich said although his band is able to exist, it has been shut out of large concert venues and has stopped even trying to advertise its concerts.

“We have a very peaceful relationship with the government,” said Kulinkovich before a performance at a small venue in Minsk, the capital. “They pretend that we don’t exist. And we pretend that they also don’t exist.”

His sentiments were echoed by Svetlana Alexievich, the Belarusian author who just won the Nobel Prize for literature.

Nobel Prize in Literature: What to Look out For

“The Belarusian government acts as though I don’t exist,” she told a news conference Thursday. “They don’t print my books here. I can’t speak anywhere publicly. Belarusian television never invites me.”

Although her works are available in a few bookstores in Belarus, they haven’t been published by large established Belarusian publishers for 25 years. Some of the few non-government-owned publishing houses have published her works.

The prestigious Nobel literature award appeared to put Lukashenko in a bind. He did not react to the announcement for about eight hours, then issued a brief and seemingly begrudging congratulations.

“I am truly happy for your success. I hope your award will serve our state and the Belarusian people,” his statement said.