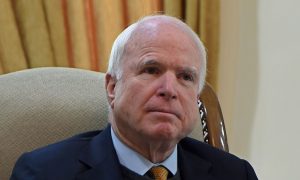 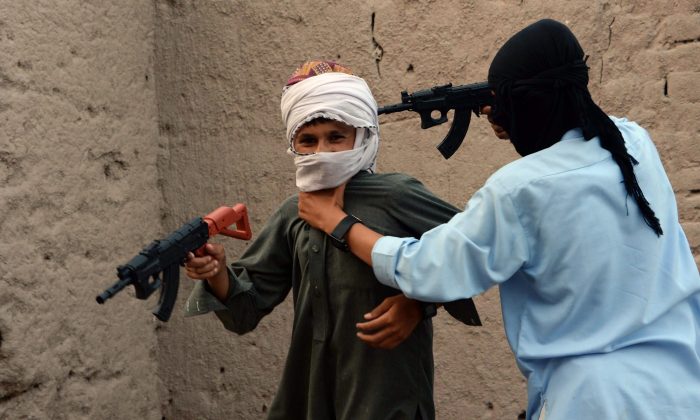 In this photograph taken on July 18, 2015, Afghan children play with plastic guns as they celebrate the second day of Eid al-Fitr which marks the end of the holy fasting month of Ramadan, on the outskirts of Jalalabad city in eastern Nangarhar province. Afghanistan banned the sale of imitation Kalashnikovs and other toy guns July 21 after they caused injuries to more than 100 people during Eid celebrations, seeking to curb a culture of violence among children. AFP PHOTO/ Noorullah Shirzada (Photo credit should read Noorullah Shirzada/AFP/Getty Images)
Middle East

In an Afghanistan Awash in Arms, a Push to Ban Toy Guns

KABUL, Afghanistan—The weapons of Afghanistan’s long decades of war can be seen almost everywhere, from the burned-out hulks of Soviet tanks to the Kalashnikov assault rifles slung over policemen’s shoulders and helicopter gunships roaring overhead.

It should be no surprise then that young children play “police and Taliban,” chasing each other around with toy guns and weaponry designed to mimic the real thing. And like the real war, there have been casualties.

“The Afghan Interior Ministry orders all police forces to confiscate toy guns, which can lead to physical and psychological damage to people,” the order read.

It didn’t elaborate on what psychological damage the toy guns can cause. The noise of gunfire is almost unmistakable to most Afghans, and unlike in the United States, there have been no prominent cases of police officers here killing children brandishing toy Kalashnikovs or plastic pistols.

Afghans have grown familiar with firearms over long decades of war, from the 1979 Soviet invasion and the resulting insurgency to the civil war and the rise of the Taliban in the 1990s. The U.S.-led invasion in 2001 after the Sept. 11 terror attacks introduced the population to a new host of armaments, from the M4 rifles carried by American soldiers to the heavy-duty armored vehicles known as MRAPs chugging down city streets.

The toy guns come mostly from China and neighboring Pakistan, and many were given to young boys as gifts during the recent Eid, or festival, that marks the end of the Muslim fasting month of Ramadan. Authorities had tried to warn parents about the dangers the guns pose before the holiday.

“An awareness video was prepared as an initiative to inform people how much these toy guns can be dangerous,” said Dr. Abdul Rahim Majeed, the program manager for the public Noor Eye Hospital. “Unfortunately, the families did not take it seriously and didn’t pay attention to this important message, and it caused many people to get injured and come to hospitals for treatments.”

Since the ban went into effect, police have been told to search shops and seize toy guns from children.

Majeed said many of those injured by toy guns came to Noor, which treated 116 cases during this most recent holiday—double the number from last year. He said the national figure of those injured likely was higher, as some may have not sought treatment or gone to private clinics.

Since the ban went into effect, police have been told to search shops and seize toy guns from children, but the Interior Ministry could not offer any statistic for the number confiscated.

Parents like Shakib Nasery, a 38-year-old father of two, welcomed the effort to destroy the toy guns. Any reduction of violence in the insurgency-wracked country—even if just children’s play—would be good, he said.

“It is not good for a society to have kids with such mentality of using guns or playing gun battles,” Nasery said. “Unfortunately, this is the negative impact of an ongoing war in our country.”