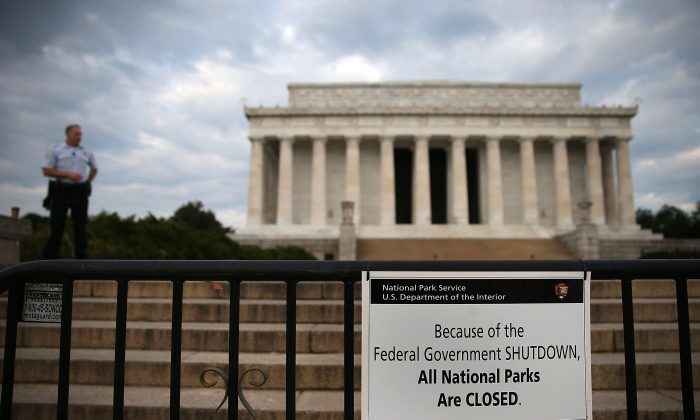 A U.S. Park Police officer stands guard in front of the closed Lincoln Memorial, Oct. 1, 2013 in Washington, D.C. Despite being shut out of their favorite public monuments, Chinese tourists are learning about America's independence from its government. (Mark Wilson/Getty Images)
China

The United States government shutdown could not have come at a worse time for Chinese tourists: thousands of them flock here during the country’s Golden Week holiday, running from Oct. 1 to Oct. 7, expecting to romp through national parks and tour memorial halls and monuments.

While many were devastated by being locked out of their tourist spots, others were astonished at the fact that American society simply continued to buzz along, almost as though the government was not such a big deal in most peoples’ lives.

“I want to cry,” wrote Chinese tourist Ms. He to her friends on WeChat, commenting on a TV screenshot with caption saying that 401 national parks would be closed. She was one of the unlucky ones.

“The shutdown affects Chinese tourists the most,” Ms. Wang from Shanghai told the Guangdong-based New Express Daily, referring to Washington D.C.’s being a hot destination for Chinese tourists during the Golden Week vacation.

“The U.S. government should compensate Chinese tourists,” she said. “The travel agency won’t give us any compensation because this was caused by force majeure.”

“Compared to the 1995-1996 shutdown, this time is more serious to us. We run mostly the Chinese market and there are many more Chinese tourists groups now than 17 years ago,” Tony Lu, a travel agent in Los Angeles for 20 years, told the Chinese state media Xinhua.

The shutdown has also stirred heated discussion in China’s online communities. Although it gave communist propagandists an opportunity to criticize democracy and the U.S. government’s “incompetence,” many Chinese thought it actually demonstrated the power of democracy.

“The incident proved that the U.S. government didn’t dominate the power and resources of the country,” wrote one blogger.

Mr. Guo, a resident from New York, told New Tang Dynasty Television, an overseas Chinese broadcaster, that his life was not affected whatsoever. “I visited the local library, and it was not affected by the shutdown at all. It didn’t affect the traffic either,” he said. “With a civilized and mature society in the United States, the shutdown didn’t at all affect society. This is a market oriented economy, and a free society,” he said.

“A country with a government that has a problem making ends meet is the most powerful country,” wrote another blogger.

Zhou Xiaohui, a social commentator, wrote in a recent column that Chinese people, and especially tourists, should make the most of the experience to educate themselves in the operations of a free, democratic country.

The reason most Americans aren’t affected by the shutdown is because state governments in the United States operate largely independent of the federal government, Zhou wrote. “This is different from the Chinese Communist Party, which has firm control over local governments across China.”