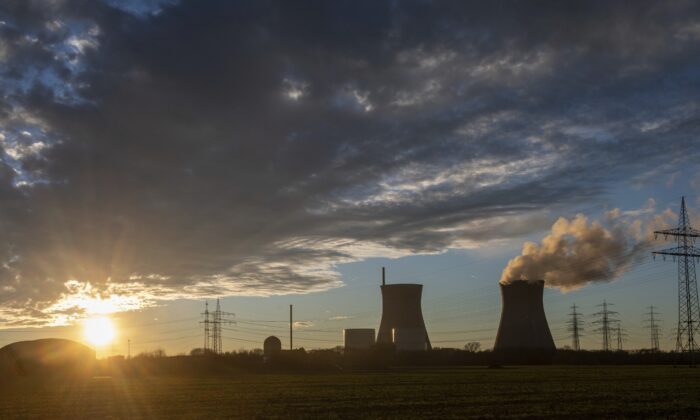 Steam rises from the cooling tower of the nuclear power plant of Gundremmingen, in Bavaria, Germany, on Dec. 31, 2021. (Stefan Puchner/dpa via AP)
Environment

ZDF, one of Germany’s public television networks, has released and deleted a modified photograph of a nuclear plant in a Facebook post, sparking mockery and outrage at a time of intense debate over the low-emission power source’s future during a worldwide push for decarbonization.

Like the BBC in the United Kingdom, ZDF is funded in part by compulsory television license fees. Every German household must pay those fees regardless of whether they own a TV, though the fees can be reduced in some cases.

The original photograph shows two cooling towers issuing white water vapor. The altered photo, which accompanied a “ZDF heute” Facebook post, depicts what looks like a black cloud of smoke around the towers. The photograph for that post has since been changed.

In a follow-up post on the same Facebook thread, ZDF claimed the smoky shade was produced by a dark Photoshop layer in order to make the text on it easier to read.

The Epoch Times has reached out to ZDF for comment.

Writing at No Tricks Zone, Pierre Gosselin expressed skepticism about ZDF’s official explanation for its manipulation of media.

“Nuclear power is hated and viewed as evil by the German media, so any possible trick to make it look bad gets the green light,” he wrote.

The controversy comes in the midst of heated debate over nuclear power in Germany and the EU more broadly.

Germany plans to close the last three of its nuclear plants by the end of this year, completing the phaseout it initiated under Chancellor Angela Merkel after the Fukushima meltdown.

The larger EU, however, has chosen a different path. In early February, it released an act affirming that natural gas and nuclear power have a place in the EU Taxonomy, a key classification scheme for labeling certain investments as environmentally sustainable.

“The Taxonomy classification does not determine whether a certain technology will or will not be part of Member State energy mixes. The objective is to step up the transition, by drawing on all possible solutions to help us reach our climate goals.

“Taking account of scientific advice and current technological progress, the Commission considers that there is a role for private investment in gas and nuclear activities in the transition,” stated an EU press release on the Act.

The EU’s move has met with resistance from the German government. After a draft plan from the commission was released several weeks ago, a government spokesperson, Steffen Hebestreit, told reporters that “We consider nuclear technology to be dangerous.”

The move has also been criticized by the Club of Rome, a group known for its focus on environmental degradation and overpopulation.

“The moves to label natural gas and nuclear as ‘green,’ in as far as being ‘transitional activities,’ is completely misleading,” said Sandrine Dixson-Declève, co-president of the Club of Rome and member of the European Commission’s Platform on Sustainable Finance, in response to the draft plan.

She cited a report from the EU Technical Expert Group on Sustainable Finance, which did not recommend the inclusion of nuclear power in the Taxonomy because of uncertainty about potential harms. That report emphasized the lack of an international consensus or an existing repository for high-level waste (the waste generated when spent nuclear fuel is reprocessed).

She attributed the push to include nuclear to France, which is heavily reliant on that power source.

Other high-profile environmental organizations have expressed more friendliness to nuclear power. The Union of Concerned Scientists and the Nature Conservancy are among the groups that have embraced the energy source to some degree, in large part because it produces very little carbon dioxide relative to fossil fuels.