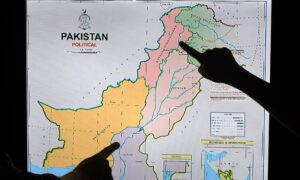 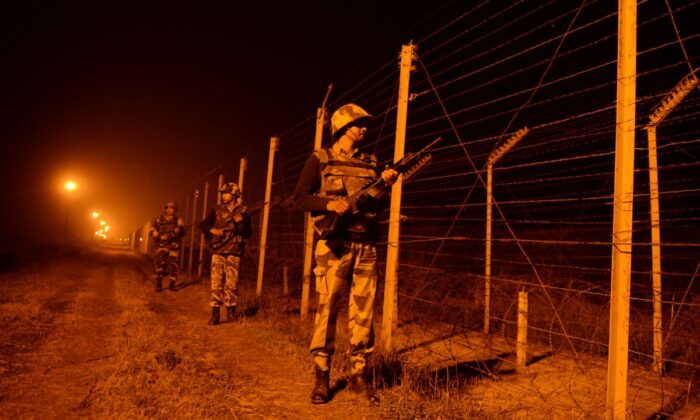 Indian Border Security Force soldiers patrol along the border fence at an outpost along the India-Pakistan border in Suchit-Garh, 36 kilometers southwest of Jammu, India, on Jan. 11, 2013. (Tauseef Mustafa/AFP via Getty Images)
India

NEW DELHI—Increasing numbers of drone sightings on the disputed India–Pakistan border have created fresh security warnings for India, threatening the ceasefire between the two countries that has been in place since late February.

Experts said the militarization of drone technology is a part of new asymmetric means of warfare that is increasingly being used by nonstate actors around the world to attack civilian and military installations.

Drones, or unmanned aerial systems (UAS), are very cheap to manufacture or acquire compared to other air-to-surface military technology. They can overwhelm expensive defense systems and threaten a nation’s security.

Seven drones were sighted on the disputed border inside India since the beginning of this month, while a “Pakistani quadcopter” was spotted inside Indian territory in the Arnia sector, 379 miles from the nation’s capital, New Delhi. It was shot down by India’s Border Security Forces, according to Indian reports.

More than 300 drones were sighted along the disputed border between India and Pakistan between August 2019 and June 28, 2021, according to Abhishek Darbey, a research associate with the New Delhi-based Center for China Analysis and Strategy, who said armed drones are developed like fighter jets and can cause similar casualties during a war.

The threat of drones as a means of covert warfare isn’t limited to the India–Pakistan border. On July 29, an Iranian-made drone dropped military-grade explosives on an oil tanker in international waters in the Arabian Sea off the coast of Oman that killed two people.

The United States and G-7 blamed Iran for the attack, and the incident led to a battle of words between Iranian and Israeli diplomats who blamed each other for threatening maritime security.

The first violent incident of a drone-related attack by a nonstate actor was perpetrated by ISIS, which detonated a drone loaded with explosives in a densely populated urban battlefield in Mosul, Iraq, in late 2016.

Since then, the use of drones by nonstate actors has been recorded in Syria, Yemen, and Ukraine and in battlefields in Africa, according to a report by Karen Allen published in the Africa Center for Strategic Studies.

The Indian establishment woke to the terror of a drone attack when two drones were used to drop explosives on the Indian air force base in Jammu on June 27, leaving two personnel injured, said Darbey.

Two days later, Indian Prime Minister Narendra Modi held a high-level meeting to discuss security threats including those posed by the drones. Just five days later, another drone was sighted in the vicinity of the same air force base.

No terrorist organization took responsibility for the June 27 attack, but the Indian security agencies believe the attack couldn’t have happened without the involvement of the Pakistan army that sits just 11 miles away at the border.

“The simple fact of the matter is that there are no non-state actors in Pakistan. This is an alibi that is used to distance the Pakistani state from its terrorist auxiliaries. Therefore, the attack was most likely the handiwork of one of these proxies of the Pakistan military establishment, most likely the Lashkar-e-Taiba,” said Sushant Sareen, a senior fellow at the Observer’s Reserve Foundation, in an analysis published on June 30.

Pakistan’s Foreign Office, however, denied the allegation and called it an “unsubstantiated propaganda and smear campaign” according to the Pakistani news source the Dawn.

The intrusion by drones has threatened the India–Pakistan cease-fire, according to Abhinav Pandya, a geostrategic analyst and the CEO of the Usanas Foundation, an India-based think tank

“However, India is playing it down for several reasons. The cease-fire has come after a long time, and India, pressurized from China on its Ladakh border, wants this cease-fire to be a successful arrangement,” he said.

Vicky Nanjappa, an Indian reporter who has covered major terrorist attacks in India, told The Epoch Times that drone sightings aren’t new in India, as they have been used to drop narcotics and ammunition inside the Indian territory from across the border for many years.

However, the recent incidents have dealt a serious warning to the Indian administration.

“The incident at Jammu is a clear indicator that these drones pose a security risk. The manner in which the drones dropped off ammunition and narcotics at the Punjab border in 2019 is also a sign of how risky these drones are,” Nanjappa said.

China-made drones with 10 kilograms of payload capacity made 10 sorties in eight days to drop AK-47 rifles, ammunition, and narcotics from Pakistan into the Punjab region of India in September 2019, according to India Today.

“The narcotics were meant to be sold on Indian soil, and the proceeds were meant to be used to fund terror in Kashmir. The ammunition too was meant to be transported to the [Kashmir] Valley. While India has managed to intercept the drones, the worry is that they keep coming into Indian territory,” Nanjappa said.

One reason why the drones have become so frequent on the India-Pakistan de facto border is because of India’s counter-infiltration grid that includes fencing on the border, Pandya says.

“India has put state-of-the-art sensors (I am not mentioning the technology for security reasons) which are difficult to escape. Earlier, Pakistan used to send weapons, drugs, and cash with the terrorists it infiltrated in Kashmir but now that has become extremely difficult due to the reasons stated above,” he said.

Drones today come with technology as advanced as that of a stealth fighter jet and are available in all sizes ranging from small toys to fighter jets, Pandya said. They are increasingly becoming dangerous because with enhanced payload they can even infiltrate teams across the border, and in many covert ways, they can be used even in civilian zones.

Simple drones that are used for aerial photography can also be used to drop an explosive or sabotage a national security asset, he said.

Darbey said China is a supplier of drones to 11 customers including Pakistan, and drone transgressions are a new form of asymmetric warfare. Their purpose is to collect intelligence and cause disturbances.

“With the Chinese investments in POK [Pakistan Occupied Kashmir] at its CPEC [China Pakistan Economic Corridor Project] project, China along with Pakistan is building military pressure at the India-Pakistan border and also at the India-Sino border,” he said, adding that older reports note China’s willingness to export missile-carrying drones to Pakistan.

Early this year, Chinese media reported that China sold 50 Pterosaur 2 drones to Pakistan. Darbey said its takeoff weight is 4.2 tons and its mission can last for 20 hours. Pterosaur can also launch air-to-surface missile attacks against India without crossing the border. Two years ago, China had sold 48.

“China is currently the country with the most complete types of drone ammunition in the world,” Darbey said. India has more UAVs than Pakistan but it needs more, as it shares long borders not only with Pakistan but also China, he said.

Experts say India is buying high-capability drones and anti-drone systems but it also has to revisit its drone policy. It needs an enhanced capability to neutralize those infiltrating from across its borders.

“It threatens to be New Delhi’s next biggest headache. Mere interception is not enough, and these drones need to be shot down,” Nanjappa said, adding that the Indian government now wants to train its police in all states to deal with the menace of infiltrating drones.

“The Bureau of Police Research and Development is currently in talks with the police chiefs of all states so that training can be imparted to counter new terror threats that have been emerging. I feel this should be done more seriously and the forces must be sensitized more and more to this emerging threat,” he said.

Pandya said the need for increased police capacity is needed because all drones that recently infiltrated Indian borders vanished except for one that was downed by the Jammu and Kashmir police.