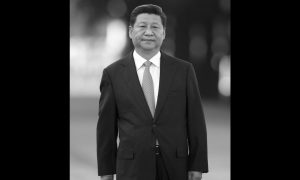 The Case of Xi Jinping's Missing Words: Who Took the Constitutionalism?
0 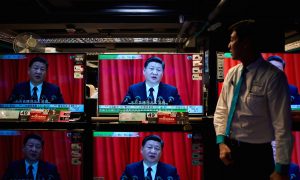 Xi Jinping Declares a ‘New Era’ for China, but Stays on Old Track of Socialism With Chinese Characteristics
0 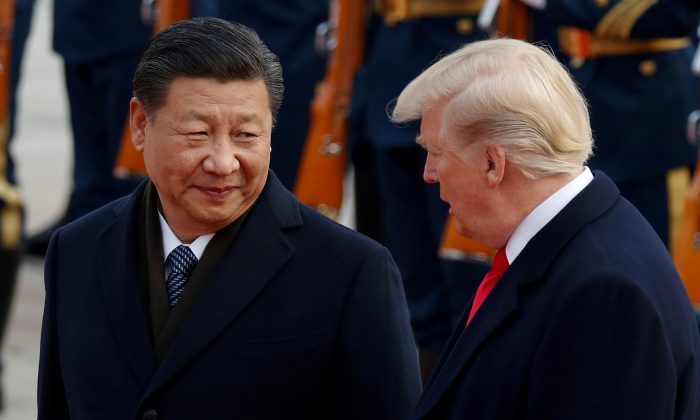 U.S. President Donald Trump takes part in a welcoming ceremony with Chinese leader Xi Jinping at the Great Hall of the People in Beijing on Nov. 9, 2017. (Damir Sagolj/Reuters)
China

Marking the 40th anniversary of economic reforms that began China’s rise as a modern power, Chinese leader Xi Jinping delivered a speech emphasizing the role of Marxism and “socialist core values” — apparently backtracking on earlier indications that he would move the country towards greater reform.

On Dec. 18, speaking for nearly an hour and a half in the Great Hall of the People in Beijing, Xi Xi Jinping made vague but strong references to Marxism and “socialism with Chinese characteristics.”

The speech was given to mark 40 years since the beginning of the Chinese Communist Party’s (CCP) “reform and opening up” in 1978. In the decades since then, China’s economy ballooned to become the second-largest in the world after the United States. The Party, however, has not given up its policies of political repression and human rights abuse.

Xi’s remarks that “we must resolutely not reform what shouldn’t and can’t be changed” have led to widespread speculation that structural reforms — the type that would bring China’s economic practices into line with most other developed countries — are not in the cards under his leadership.

The Chinese regime, Xi said, must “adhere to the leadership of the Chinese Communist Party,” “uphold the Marxism,” and “insist on socialism with Chinese characteristics.”

“There is no grand master who can lecture the Chinese people,” Xi said, apparently referring to the United States.

Backtracking on Promises, or Communist Boilerplate?

Xi’s speech comes off as misplaced in light of his recent behavior in the Sino-U.S. relationship. At the same time, his dogged emphasis of Marxism and socialism are in keeping with the statements of previous Party leaders, each of whom have had to reconcile the capitalist aspects of contemporary Chinese economy and society with the CCP’s communist ideology.

A little over a fortnight prior, Xi had met with U.S. President Donald Trump on the sidelines of the G20 Summit in Argentina. There, the two leaders had a reportedly amiable round of negotiations that prompted Trump to issue a 90-day “cease-fire” to the ongoing Sino-U.S. trade war.

Starting this spring, Washington has imposed high punitive tariffs on hundreds of billions of dollars’ worth of Chinese exports in response to the CCP’s widespread and longstanding breaches of business standards. Examples include heavy state interventionism, dumping, and rampant theft of intellectual property.

The tariffs, in conjunction with other U.S. measures to curb China’s undesirable economic practices as well as China’s own internal woes, have taken their toll on Chinese citizens and businesses. The regime is struggling to meet demand for food staples and control unemployment, while thousands of businesses have gone bankrupt.

In Argentina, Xi Jinping seemed ready to make accommodations. According to American officials present at the meeting, Xi offered detailed responses to U.S. government demands in talks that Trump praised as a potential prelude to a “real deal” with China.

The atmosphere of the Trump-Xi meeting contrasted with the Chinese regime’s attitude throughout the trade war: Beijing has uniformly rebuffed the Trump administration’s charges, accusing the United States of unfairly trying to contain China’s economic rise.

As seen in the Xi-Trump summit, the Chinese leader’s stated aims sometimes veer from conventional CCP norms. He has presented himself as an ardent reformer, and even a supporter of constitutional governance, the latter usually being something of a third rail in a system where the Communist Party is effectively above the law. Shortly after taking up office, Xi designated Dec. 4 as China’s Constitution Day; for the occasion this year, 100,000 lawyers around the country were mobilized to make mass oaths of loyalty to the document.

At the same time, since coming to power as general secretary of the CCP in 2013, Xi Jinping has regularly hearkened to the Party’s Marxist ideology, as well as “socialist core values.” Such rhetoric accompanies his crackdowns against factional rivals within the regime, as well as his moves to consolidate more authority and prestige in the hands of himself and the central government.

CCP governance in the decades prior to Xi’s leadership was characterized by “collective leadership.” In this framework, powerful Party officials aligned with retired leaders, prominently former Party boss Jiang Zemin, carved out spheres of influence for themselves and their supporters in the regime.

The CCP establishment has amplified the content of Xi’s recent speech.

Navarro had recently said that the aim of American trade negotiations was not simply to increase U.S. imports to China, but more importantly to encourage structural reform by Beijing.

Hua answered: “I would like to suggest Mr. Navarro and other officials who share his opinions to read carefully General Secretary Xi Jinping’s important speech at the 40th anniversary of the ‘reform and opening up’ ceremony this morning.”