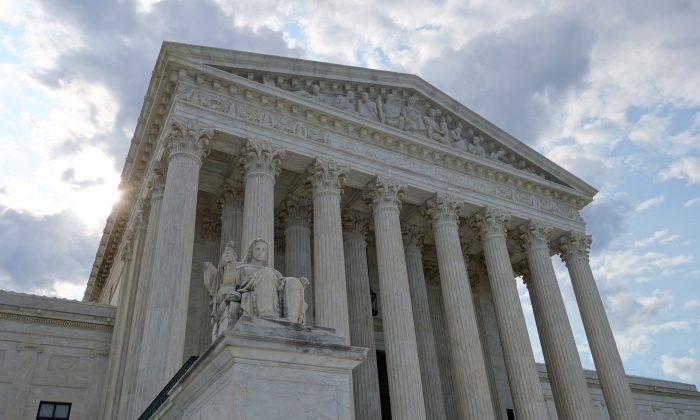 The US Supreme Court is seen August 1, 2015 in Washington, DC. (Karen Bleier/AFP/Getty Images)
US

In 2016 Campaign, Both Parties Want Reform in Justice System

WASHINGTON—On the campaign trail, among candidates of both parties, the idea of locking up drug criminals for life is a lot less popular than it was a generation ago.

The 2016 presidential race has accelerated an evolution away from the traditional tough-on-crime candidate. A Republican Party that’s long taken a law-and-order stance finds itself desperate to improve its standing among minority voters, and Democratic candidates are also being drawn into national conversations on policing, drug crimes and prison costs.

With criminal justice issues intruding into election season, the “Just Say No” message of the Reagan administration and the “three strikes” sentencing law developed a decade later under President Bill Clinton have given way to concerns over bloated prison costs, the racial inequities of harsh drug punishments and how police interact with their communities.

But even among those in both parties who support changing the criminal justice system, there’s no consensus on how to do it and candidates are scrambling to differentiate themselves on what law and order means.

“You don’t have everyone saying they’re tough on crime,” said Inimai Chettiar of the Brennan Center for Justice in New York, which advocates reducing prison populations. “Instead, you have people offering different policy solutions.”

The Paris attacks have at least temporarily thrust national security to the forefront of the presidential race, but criminal justice issues have been periodically popping up, particularly among Democrats, in a year of tumult in U.S. cities. In the Republican field, Kentucky Sen. Rand Paul has been out front in seeking to “break the cycle of incarceration for non-violent ex-offenders.”

The push to rethink sentences for drug offenders is coinciding with the Black Lives Matter movement and its debate about police treatment of minorities, a heroin crisis that’s brought renewed attention to addiction and a homicide spike in some big cities. Sometimes that mix of issues defies consistency.

Republican Chris Christie, the New Jersey governor and a former federal prosecutor, has preached treatment rather than prison for drug addicts and spoken sympathetically of a law school friend who died after getting hooked on painkillers. But when it comes to discussing policing, he accuses Democrats in Washington of “allowing lawlessness to reign” and tells law enforcement “I’ll have your back,” suggesting that the Obama administration doesn’t.

Texas Sen. Ted Cruz, a fellow Republican, criticizes harsh mandatory minimum sentences for drug offenders. But last month he voted against legislation that would have made nonviolent drug offenders eligible for shorter prison sentences, saying he was concerned it could also benefit violent felons.

And while Florida Sen. Marco Rubio has endorsed a review of the criminal code and decried “selective enforcement” of the law, he wrote in an essay for a Brennan Center book this year that drug laws had helped restore “law and order to America’s cities” and that shorter drug-crime sentences should be approached with caution.

Support for more lenient sentencing from Republican members of Congress and wealthy conservative backers such as the Koch brothers has made it easier for budget-minded presidential candidates to support sentencing policy changes. It’s not clear, though, how much benefit candidates gain from pressing the issue with average voters, said Fergus Cullen, former chairman of the New Hampshire Republican Party.

Some leading candidates such as Donald Trump hardly mention the issue on the campaign trail, and Ben Carson, the sole Republican participant in a recent candidate forum on criminal justice, said he was still waiting to see evidence of racial bias by police.

“The Republican primary voters are not a soft-hearted bunch when it comes to criminal justice issues, and I don’t think there are a lot of voters to be had,” Cullen said.

Democratic candidates are more unified in their embrace of the Black Lives Matter movement and of overall change to the criminal justice system.

After Baltimore’s riots in April, Hillary Rodham Clinton, the Democratic front-runner whose husband promoted a more conventional tough-on-crime stance, called the criminal justice system “out of balance” and urged an end to “mass incarceration.” More recently, she proposed lifting restrictions on getting marijuana for medical studies and said it should be reclassified by the government to allow federally sponsored research into its effects.

Her rival, Vermont Sen. Bernie Sanders, has called for accountability for police officers who “kill people who are unarmed” and suggested moving forward with marijuana legalization.

It’s all a big change from a generation or two ago.

“The threat of someone waging a ‘tough on crime’ campaign as their calling card is, I think, very much diminished from what we might have seen 20 years ago,” said Marc Mauer, executive director of the Sentencing Project, which advocates sentencing policy changes.

The “reform movement” has strong enough support, Mauer said, that it would be “difficult for a candidate to try to make hay out of it.”

It’s not clear how rising homicide rates in some cities will affect efforts to remake the criminal justice system, especially since there’s no consensus about what’s caused the trend or whether it will last. FBI Director James Comey said recently that if the trend were to continue, “we will be back to talking about how law enforcement needs to help rescue black neighborhoods from the grip of violence.”

“All lives matter too much for us to let that happen,” he said.

It also remains to be seen how campaign-trail rhetoric will translate into policy or how committed a future president will be in pushing for sentencing changes. But issues of criminal justice that in many ways were once considered local concerns are, at least for now, in play on the national level.