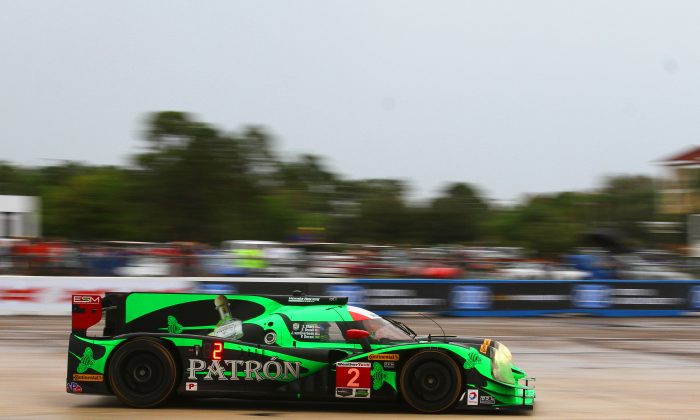 Extreme Speed Motorsport won both the Rolex 24 and the Sebring 12 Hours in 2016, with the #2 Ligier-Honda, here rounding Turn 17 during the 2016 12 Hours. This year the team will field a pair of Ligier-based Nissan DPis. (Chris Jasurek/Epoch Times)
Motorsports

The Rolex 24 started the 2017 IMSA WSC season off on an extremely high note, with ridiculously close finishes in three of the four classes—winners in Prototype, GT Le Mans, and Gt Daytona were up in the air into the final ten minutes of the 24-hour race. Only Prototype Challenge didn’t offer up a down-to-the-wire finish.

How can IMSA follow up on this amazing 24-hour event? With a tough 12-hour race at yet another classic American race track.

Three-and-a-half weeks after the grueling Rolex 24 at Daytona, the prospective Sebring field will be back in action, with new engine tunes, new transmission gearing, all new suspension settings, and completely different aerodynamic configurations, to be ready twelve hours of pounding around for Sebring’s 17 crumbling concrete corners.

While the Rolex 24 is the longest race on the schedule, the Sebring Twelve Hours is by far the hardest. The track has a mixture of medium and high-speed turns, a few straights where the cars can fully wind out their engines, and some of the most undulating, uneven pavement of any track in the nation.

Originally laid out on World-War-II-era airbase runways, Sebring still uses some of that 75-year-old surface; even the portions which have been paved over or added in recent decades is rough and bumpy.

It is not unusual to see car bounce two wheels off the pavement coming through Turn 17, a turn which is taken nearly flat out despite funneling from a wide airport runway and under a narrow bridge over pavement which ripples and heaves. Turn Ten, another high-speed right-hander, has lumps near the exit which regularly loft cars’ wheels clear of the pavement.

For years cars planning to compete at Le Mans would skip the Rolex 24 to test at Sebring instead; the thinking was that any car which could survive twelve hours of pounding at Sebring would have no trouble running twice that long at any other track in the world.

For IMSA, the Sebring Test is even more important in the modern era than it was in the past. Since the reunification of North American sportscar racing in 2014, both the Rolex 24 and the Sebring Twelve Hours are on the same schedule—which hadn’t happened since 1997.

This means teams have to start the season setting up for the Daytona International Speedway, a 3.56-mile roval (road course/oval) with two-thirds of each lap run flat-out on the 31-degree NASCAR banking, where the cars are mashed hard to the track by downforce while running into a brick wall of wind resistance.

Cars need to be as slippery as possible to make time on the banking, but also need sufficient downforce to maneuver around the two hairpins of the infield course. Suspensions need to be stout enough to hold the car off the track on the banking, yet supple enough to keep the wheels planted around high-G corners.

Motors have to be tuned to deliver huge horsepower, but also need to able to run at top speed for 45 seconds of each 90-second lap, while still making enough torque to launch out of slow corners in the infield.

And the cars have to operate across that wide range of parameters faultlessly for 24 hours.

The only thing Daytona doesn’t throw at teams is bumps.

Sebring on the other hand, is more of a normal medium-fast road course—except that it is so rough it is akin to an off-road course. Driver need to fight fatigue to survive the Rolex 24, but they need to battle bruises and blisters to get through half that time at Sebring.

These new cars have only raced once—at Daytona, a track unlike any other on the schedule. Now teams need to figure out how to make these cars work at another, equally unique track, one which is in its way even more demanding the 24 hours around Daytona.

The Winter Test is equally important for the series management. it is at Sebring that IMSA officials will gather data used to balance the performance of various chassis and engine combinations for the rest of the year.

All the information collected at the Roar Before the 24 is worthless once the Rolex 24 is over. IMSA officials need to start over, figuring out which cars need a little more weight or a little less wing or more or fewer RPMs or a bigger or smaller air intake restrictors. or turbocharger boost pressure.

Gathering, analyzing and acting on this data is probably the hardest and the most important task face series officials. The adjustments they legislate will to a large degree determine whether or not the Sebring 12 Hours is a fair race, and whether the rest of the season offers honest competition, or an endless series of adjustments which leave teams enraged and fans dismayed.

When the series gets it right—as they did at Daytona—a group of disparate cars can compete on a level playing field, and the teams and drivers determine the winner.

If not … well, there have been instances in the past. fans will remember them and cringe, and no one else needs have those incidents imposed upon them. Suffice to say, the series has learned a lot, as was shown at Daytona in January.

The tests are open to the public. Tickets are ten dollars per day, or included free in the price of tickets for the Mobil 1 Sebring Twelve Hours. Tickets can be purchased at the track, by calling 800-625-RACE, or online at the Sebring Raceway website.