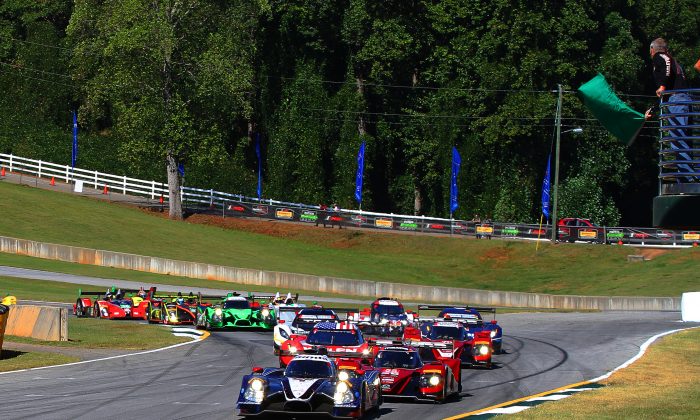 The #60 MSR Ligier-Honda leads the field to the green flag for the start of the 2016 IMSA WeatherTech Sportscar Championship Petit Le Mans at Road Atlanta on Oct.1. (Chris Jasurek/Epoch Times)
Motorsports

BRASELTON, Ga.—IMSA’s WeatherTech Sportscar Championship wrapped up its 2016 season and its opening era at the ten-hour Petit Le Mans at Road Atlanta on Oct.1.

The weather was perfect, crowds were huge, and the racing was top-notch as cars fought for position and even class lead right down to the final lap of this 412-lap event.

Both the WSC overall title and the North American Endurance Cup contest were decided at Petit Le Mans, which led to a lot of highly competitive racing. Some endurance events are semi-parades followed by one-stint sprints; because the NAEC awards points at four-hour intervals throughout the race, teams were motivated to push hard throughout the event.

Action Express won a third straight championship—but for its #31 Coyote-Corvette of Eric Curran, Dane Cameron, and Simon Pagenaud, not the #5, driven by Joao Barbosa, Christian Fittipaldi, and Filipe Albuquerque, which took the first two.

Corvette Racing locked up the team, Driver, and Manufacturer titles in GTLM with the #4 C7.R of Oliver Gavin and Tom Milner (assisted by Marcel Fässler) while finishing third in class in the race.

Prototype Challenge was Not won by Core Autosports for a change, as the team had withdrawn before the race to prepare for the 2017 season. Instead Alexander Popow and Renger van der Zander (with David Heinemeier-Hansson) in the #8 Starworks Motorsports Oreca-Chevrolet took the class title.

Teams which weren’t in the running for a class or NAEC title fought just to win—Two perfect examples being the #60 Michael Shank Racing Ligier Honda, driven by John Pew, Oswaldo Negri Jr., and Olivier Pla, which won overall in its final race, and the #62 Risi Ferrari of Giancarlo Fisichella, Toni Vilander, and James Calado which ended several seasons of less-than-excellent luck with a solid win in the GTLM class.

The Le Mans 24 battle between Ford and Ferrari played out again at Petit Le Mans, with the #66 Ford-Ganassi Ford GT finishing second in class. The #67 Ford, which came to the race with an outside shot at the class championship, lost its chance after contact with the #100 BMW-Team RLL M6 two-and-a-half hours in.

GTD went to the #33 Riley Motorsports Viper, a fitting end for this fine car’s racing career. Actually, Andy Lally in the #44 Magnus Racing Audi passed Jeroen Bleekemolen in the #33 Viper on the final lap, but the Magnus car was later relegated to the back of the field for a drive-time violation.

Pole-winner Robert Alon and co-drivers Jose Gutierrez and Tom Kimber-Smith put the #52 PR1/Mathiasen Motorsports Oreca-Chevrolet on the top step of the PC podium, finishing a lap ahead of the #38 Performance Tech Oreca of James French, Kyle Marcelli, and Kenton Koch.

PC was the only class which wasn’t close at the finish, although the #52, the #8 Starworks car, the #38, and the #85 JDC-Miller Motorsports car fought hard for the first several hours of the race.

Born of two competing series, WSC was plagued from Day One by a conflict of chassis types in its top class. In an effort to retain teams from the two constituent series, WSC opted to let the top cars of both series compete, despite the overwhelming differences between them (imagine trying to race horse and camels on a single track, with no advantage to either animal.)

On the one side were the Daytona Prototypes: big, heavy, sturdy, simple, with powerful, torquey American V8s. Originally fairly primitive aerodynamically, the DPs had to be significantly (and expensively) upgraded when the new series started in 2014. Te fourth-generation Daytona Prototypes, while still heavy and a bit blunt, were serious sports-racers when they first hit the track for testing at Daytona before the first season.

Facing off against the Daytona prototypes were the LMP2s: lighter, more modern, with highly developed aerodynamics but less power than the DPs. The P2s were significantly faster than the DPs in unmodified form—and even a little quicker over a lap than the highly modified gen-4 DPs. However, the two cars made speed in vastly different ways.

The P2s needed to maintain speed through corners. With advanced aero but less power, the P2s could corner very quickly but if they lost momentum mid-corner, they were slow to regain the pace upon exit.

The heavier DPs had to brake harder for corners, but with their big V8s, could accelerate out of the corners much more quickly than the P2s. This mean that if a DP got ahead of a P2, the P2 wouldn’t be able to pass—the DP would brake early for each corner, and leave the P2 far behind on exit. The P2 would almost catch up by the next corner, only to be forced to scrub speed again as the DP braked.

The solutions were not simple. If the P2s were given enough power and lightened enough to hang on under acceleration, they would be too fast once they got out in front: the DPs wouldn’t have a chance, falling further behind at each corner. Also, beyond a certain point it was impossible to keep increasing P2 power; the engines were operating near maximum, which courted reliability problems.

The 2016 season, the first supported by WeatherTech as the title sponsor, saw the best balance between the two types of chassis in the top class, but so long as there were two very different types of cars competing, there would always be tensions and dissent. Whichever type of car won a race, fans of the other type would hint that the series got the balance wrong.

Finally, after three years of heroic work by series management to balance inherently unbalanced chassis, the series has developed beyond its initial limitations.

Come 2017, both the current LMP2s and the old DPs will be gone, replaced by a new top class: the Daytona Prototype International,. or DPi.

The FIA (Fédération Internationale de l’Automobile) which controls most automobile racing around the world, has designed a new set of regulations for its LMP2 class. All cars in the class will be based on chassis built by one of four approved constructors (Dallara, Onroak, Oreca, and Riley/Multimatic,) all using a brand new 4.6-liter V8 motor designed by Gibson (né Zytec.) This new car, which will race in all the European and Asian series administered by the FIA, will also be eligible to race in IMSA’s WSC.

LMP2 is the third-tier class in FIA’s roster of classes, behind LMP1-Hybrid and LMP1-Privateer. The class is designed to be cost-capped and economical, and entry-level prototype class for drivers and teams looking to go racing on the world’s biggest stage without breaking the bank. The series has a mandated Pro-Am structure; there must be a certain number of gentleman drivers on each team. The all-pro and factory-sponsored teams have to move up to LMP1.

IMSA officials realized that they needed something better for WSC’s top class—fans wouldn’t accept a grid full of identical cars. Still, IMSA understood that it needed to work with the FIA and its regulations—there was no way for chassis constructors to economically design and build cars for a single North American series.

In response IMSA developed the DPi concept: cars based on the FIA’s LMP2 chassis, with modified bodywork and a much wider choice of engines.

The New DPis can use any of the power plans currently in use in WSC or in the FIA’s various series: Chevrolet’s Corvette V8, Ford’s Eco-Boost V6 turbo, Mazda’s AER-based inline 4-cylinder twin turbo, or Nissan’s turbocharged 3.8-liter V6, or even Honda’s 3.5-liter turbo V6. However, teams have to sign a deal with a car manufacturer, which would provide bodywork ideas and a power plant, and a chassis constructor, which would provide the basic chassis, which could be modified in certain specified areas.

This arrangement kept all the cars basically on par, but allowed for individual visual differences, different motors, and most important, factory involvement. With the DPi, car makers could sign up to co-build cars which could best promote their brands, keeping the all-important manufacturer money in the series, while limiting modifications so that manufacturers didn’t get into the kind of ruinous spending wars which had driven car-makers out of racing in earlier eras.

The new DPis should make their public testing debut on November 15-15, 2016, at Daytona International Speedway.