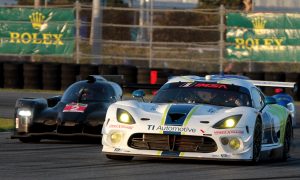 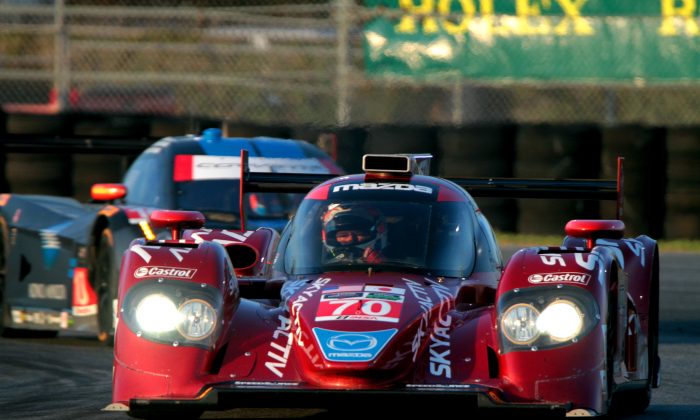 The #70 Mazda diesel leads the #10 WTR Dallara-Corvette through the East Horseshoe at Daytona International Speedway during the Tudor Championship Roar Before the 24, Jan. 10, 2015. (Chris Jasurek/Epoch Tiimes)
Motorsports

IMSA has released its final Balance of Performance—oh, sorry, Adjustment of Performance—figures for next weekend’s Tudor United SportsCar Championship Rolex 24 at Daytona. The new numbers, based on results from the 2015 Roar Before the 24, show no radical readjustments for the most part.

In the Prototype class, little was changed except fuel capacity, which was increased for five of the eight makes. The Ligier-Judd got a significant (40 kg) weight reduction to counter the fact that it has the smallest naturally-inducted engine (3.6 liters versus five and five-and-a-half for the Daytona Prototypes.)

As it stands, weights will be as follows: The Ligier-Judd and Lola-Mazda diesel will race at 900 kg, HPD-Hondas and Ligier-Hondas at 940 kg, and all Daytona Prototypes at 1039 kg. The DeltaWing weighs in at 515 kg.

Five of the eight makes received a fuel capacity increase: Corvette DPs got a 6-liter increase to 76 liters, Riley-Fords a five-liter increase to 78 liters, and all Ligiers and HPDs, 2.3 liters to 78.3. Riley-BMWs stay at 82 liters, The Mazda diesel at 70 (though it did get a 5-mm fuel filler increase,) and the DeltaWing, 53 liters.

GT Le Mans got a few adjustments as well.

Aston Martin’s V8 Vantages can use a special Le Mans-style splitter and take of the dive planes. BMW can use special optimized doorsills. Everyone else runs in normal trim.

Everyone but Porsche got fuel capacity increases: Aston up four liters to 89, BMW up five to 105, Corvette up six to 102, and Ferrari was given an extra liter for a total capacity of 95 liters.

BMW and Porsche were both allowed a ten-millimeter increase in the rear wing gurney, which should slow them down a little but add more downforce as well.

Everybody got a fuel tank increase: Aston, 9 liters to 104 liters, Audi, +5 to 103, BMW +3 to 100, Dodge’s Vipers had one added liter to raise the capacity to 111, Ferrai an added four liters to 99, and Porsche an added five liters to 91 liters. Aston also got a one-millimeter increase in its fuel filler.

Prototype Challenge was not adjusted. Apparently the adjustments instituted for the Roar—restrictors removed, ride-height limit eradicated, and new camshafts which changed power- and toque curves—gave the desired performance relative to the other classes.