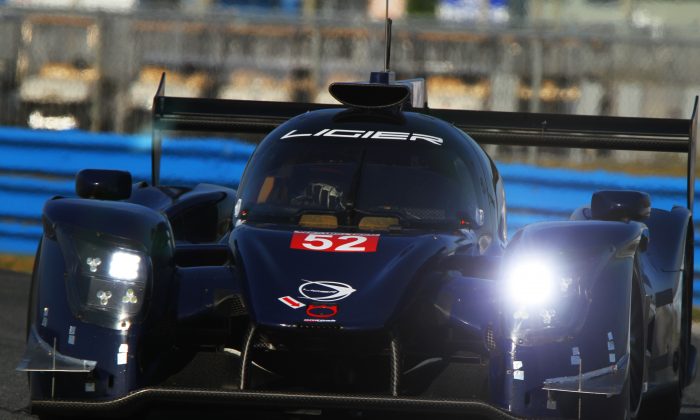 The #52 PR1/Mathiasen Motorsports Ligier JS P217 Gibson was the only FIA-legal P2, and the only car eligible for IMSA’s DPi class, to show up at the test. Its appearance, its performance, and its engine note gave fans hope for the future. (Chris Jasurek/Epoch Times)
Motorsports

DAYTONA BEACH, Fla.—Some people complain about Christmas decorations going up in November. Well how about this: IMSA’s WeatherTech Sportscar Championship kicked off its 2017 two weeks before Thanksgiving with a two-day test at Daytona International Speedway, Nov. 15–16. For sports car fans, this was Christmas coming early—and it was a very good thing.

The test didn’t bring out the anticipated flock of Daytona Prototype internationals—most of the top-tier cars are still in development and won’t be ready until the December 13-14 test. However, a number of brand new GT-Daytona class entries did show up, including the public debuts of the Lexus RC F GT3, the Acura NSX GT3, and one of three Mercedes AMG GT3 which will be competing in 2017.

PR1/Mathiasen has a long history of success in Prototype Challenge class, both in ALMS and through all three years of IMSA’s new top series. For the test it brought an international array of pilots: Mexico’s Jose Gutierrez, Tom Kimber-Smith from Great Britain, Julian Canal from France, and USA’s Michael Guasch.

The dark blue P2 chassis looked similar to the old Ligier, which is to say it was slick, modern, and well thought-out. The 4.6-liter Gibson V8 racing motor let loose glorious streams of explosions on deceleration and pushed the new prototype to obviously higher speeds than any of the GTDs.

A pair of Prototype Challenge cars showed up: the #20 Bar1 Oreca-Chevrolet, and the #88 Starworks Oreca-Chevrolet. With the PC class in its last season, Starworks is supposed to be entering a pair of DPis, but showed no sign of them at Daytona.

GT Daytona was where the most new-car action occurred with American debuts for a pair of cars and a first test for a car finally showing up in the series.

The team covered 700 miles in 14 hours of testing over the two days with no mechanical issues from the chassis or the 3.5-liter twin-turbocharged V6 engine.

Paul Gentilozzi’s 3GT Racing brought one of the two Lexus RC F GT3s it plans to campaign in IMSA in 2017. Drivers Scott Pruett, Sage Karam, Robert Alon, and Jack Hawksworth debuted the new Lexus. The car in its metallic blue livery was quite pretty, but the sounds of its five-liter V8 were its strongest feature—the Lexus and the Ligier’s Gibson were the best-sounding of the cars at the test.

3GT plans to be back at the December test with both cars ready to roll.

After making the fans wait for a year, Mercedes and IMSA finally worked out whatever partnership negotiations had kept the car out of the series in 2016; three of these 6.3-liter V8-powered German beauties are entered for IMSA’s 2017 season.

Riley Motosports is prepping a pair of Mercedes-AMGs for next season, one running in AMG-Team Riley Motorsports livery, the second in WeatherTech colors. Neither of these entries showed up for the test. Luckily, however, SunEnergy1 Racing brought its #75 Merc-AMG GT3 for drivers Boris Said, Tristan Vautier, and Kenny Habul.

Boris Said has driven everything in every series over the past couple of decades; Tristan Vautier has proved his talent in sports cars and single-seaters. Kenny Habul gained fame in Australia’s V8 Supercar and Formula 3 series, then moved to the U.S. to compete in NASCAR. He should be right art home behind the Mercedes’ big V8.

Multiple Prototype Challenge champs Core Autosport came out with its GTD Porsche. Considering that Core personnel form the basis for Porsche North America’s GT Le Mans squad, the GTD Porsche should be pretty simple to master. Team owner and driver John Bennett has proven his ability, while co-driver Colin Braun is seriously quick. This should be a very successful entry in 2017 … assuming Balance of Performance doesn’t hinder the car.

Lamborghini’s Huracan is still a popular model, proven by the presence of a trio of the V10-powered Italian (well, German-Italian) behemoths. Paul Miller Racing returned with its #48 Huracan (not surprising after finishing the 2016 season third in class,) and Dream Racing brought its #27 car. New entry Ebimotors brought Italian drivers Emanuele Busnelli and Fabio Babini for its bronze-and-blue #46 Huracan.


Stevenson Motorsports brought one of its GTD Audis, the #6 R8 LMS GT3 for Robbin Liddell and Andrew Davis.

IMSA will hold another test for WeatherTech Sportscar Championship 2017 entries at Daytona International Speedway on December 13–14—a test where hopefully most of the series’ new DPi entries will debut.