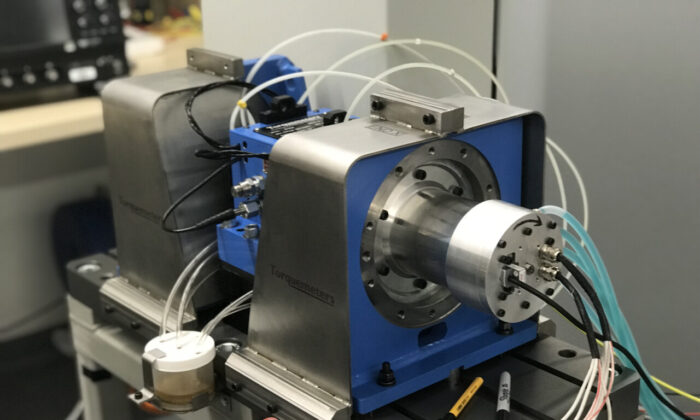 The new magnetically driven motor designed and built by a team at University of New South Wales. (Courtesy of Guoyo Chu)
Australia

A team of researchers from the University of New South Wales (UNSW) has developed a new record-breaking high-speed motor that could improve the range of electric vehicles (EV).

The new motor is the fastest Interior Permanent Magnet Synchronous Motor (IPMSM) that has ever been built with commercialised lamination materials, achieving speeds of 100,000 revolutions per minute, doubling the speeds of all previous high-speed records of laminated IPMSM’s.

IPMSM’s function using rated torque —maximum continuous force available to push the rotor, the moving component in a motor, around an axis to generate power. The force is conjured by permanent magnets that are embedded in the steel rotor.

The maximum speed of current IPMSM’s is limited because of iron bridges in their rotors, which cause the motor to suffer from low mechanical strength.

However, the team at UNSW improved the mechanical robustness of their IPMSM by developing a new rotor topology. The new rotor design also lowers the amount of rare earth materials needed per unit of power production.

The team, headed by Assoc. Prof. Rukmi Dutta and researcher Guoyu Chu from the UNSW School of Electrical Engineering and Telecommunications got the inspiration for the design of the motor from South Korea’s Gyopo rail bridge which has a double-tied arch structure and compound-curve-based mechanical stress distribution technique.

In an email to The Epoch Times, co-head Chu said that there are three reasons that the rotor has excellent mechanical robustness.

Firstly, the rotor structure is mechanically robust and has been successfully implemented and verified in civil engineering. Secondly, the team established a very accurate analytical model for the mechanical strength of IPMSM rotors.

“The in-depth analysis helped us to modify and integrate the double-tied arch structure into the rotor design,” Chu said.

Finally, the design of the rotor was optimized using a multi-physics and multi-objective optimization package that is based on a genetic algorithm.

“This UNSW-developed advanced optimization package helped find the best balance between the rotor’s electromagnetic and mechanical design concerns,” he said.

The optimization package evaluated 90 designs and nominated the best 50 percent of them; from this selection, the program generated a new range of designs. The optimization program repeated this process until it arrived at the optimum design, which in the case of this motor was the 190th generation that the program analysed.

What this Device Could Mean For Electric Vehicles

“One of the trends for electric vehicles is for them to have motors which rotate at higher speeds,” said Chu in a UNSW news release.

“Every EV manufacturer is trying to develop high-speed motors, and the reason is that the nature of the law of physics then allows you to shrink the size of that machine.”

Chu said usually, the bigger the IPMSM, the more rated torque and that the power of IPMSM’s is equal to the rated torque multiplied by the speed —how fast the rotor is being turned.

“And with a smaller machine, it weighs less and consumes less energy and therefore that gives the vehicle a longer range.”

Importantly, the new high-speed motor can produce a very high power density, allowing for the weight of the motor to be reduced, which is useful for electric vehicles as it increases the range for any given charge.

“High speed can help reduce both size and weight of the motor, as well as the inverter. The reduced weight helps to reduce energy consumption; the reduced size will allow putting more batteries into the EV,” Chu explained.

“Moreover, if the whole drivetrain can be optimized for the high-speed motor, the system efficiency may also be increased.”

Altering the Motor For Electric Vehicles

Chu noted that with the researchers had tried to achieve the absolute maximum speed they could with the project, recording “over 100,000 revolutions per minute” with the peak power density being “around 7kW per kilogram.”

He said that for an electric vehicle, the team would increase the power of the motor by somewhat reducing its speed.

“We can scale and optimise to provide power and speed in a given range—for example, a 200kW motor with a maximum speed of around 18,000 rpm that perfectly suits EV applications,”he said.

He said that if an EV manufacturer wanted to use this motor in their cars, he believes that it would take only six to twelve months to modify the motor to satisfy their specifications.

“We have our own machine design software package where we can input the requirements of speed, or power density and run the system for a couple of weeks, and it gives us the optimum design that satisfies those needs.”

Other Applications of the Motor

This new motor has many potential applications outside of its use in electric vehicles. For example, this high-speed motor could allow high precision Computer Numerical Control (CNC) machines, which are highly sought after in the aviation and robotics industry, to drill or mill with minimal diameters.

This motor could also be useful in large heating, ventilation, and air conditioning (HVAC) systems, which, in order to use a new type of refrigerant that is more eco-friendly, require high-speed compressors. Another possible application is as an IDG (Integrated Drive Generator), providing power to aircraft systems from inside the engine of the machine.

Furthermore, the motor is less expensive than current technology and requires less rare earth materials such as neodymium.

“Most high-speed motors use a sleeve to strengthen the rotors, and that sleeve is usually made of high-cost material such as titanium or carbon fibre,” Chu said.

He noted that the sleeve is very expensive and needs to be precisely fitted, which increases the cost of manufacturing the motor.

“Our rotors have very good mechanical robustness, so we don’t need that sleeve, which reduces the manufacturing cost,” he said.

“And we only use around 30 per cent of rare earth materials, which includes a big reduction in the material cost – thus making our high-performance motors more environmentally friendly and affordable.”