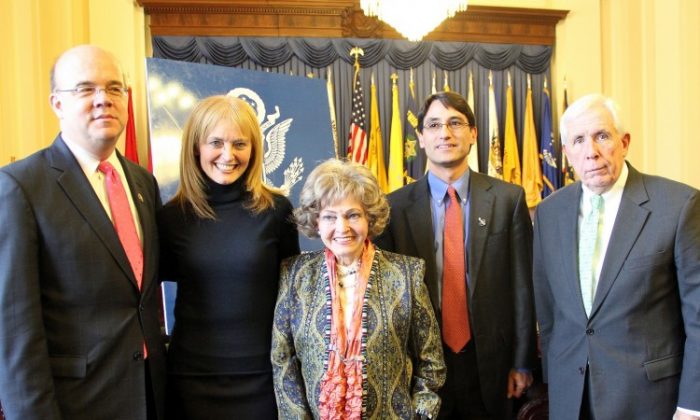 A Chinese civil rights lawyer who has been under various forms of extralegal detention and persecution since late 2006 was made an inaugural prisoner of conscience of particular concern in a new alliance between various independent and U.S. government-affiliated human rights organizations Thursday.

Gao Zhisheng, currently shut in a jail cell for his advocacy on behalf of persecuted Falun Gong believers in China, was “adopted” by Congressman Frank Wolf (R-Va.) in the new Defending Freedoms Project.

The program was established jointly by the Tom Lantos Human Rights Commission, the Commission of International Religious Freedom, and Amnesty International. It aims to have members of Congress “adopt a prisoner and advocate for their release” as well as to change the policies that led to the detention, according to Rep. James P. McGovern (D-Mass.), who adopted the Bahraini activist Nabeel Rajab. Rajab sits in prison for sending Twitter messages that the authorities took a dislike of.

Along with adopting particular prisoners and advocating for their release, “More broadly the goal is to raise awareness and provide support for prisoners of conscience around the world,” McGovern said.

“There are far too many brave people around the world that languish in jail cells simply because they engage in peaceful protests,” he said.

Wolf who adopted the Chinese lawyer Gao, has for years advocated on behalf of human rights in China. “China has one of the worst human rights records in the world, don’t you think?” he said in an interview after the event.

The plans for securing Gao’s release were expressed in the same blunt manner. “We will do everything, everything, whatever works. Letters, meetings, we’ll have every delegation that goes to China raise the issue,” he said.

“All the things that worked in the 1980s we’ll do again,” he added, describing what he sees as the golden years of United States advocacy for human rights around the world, under President Carter and most especially under President Reagan.

At stake is ending “the fear, the injustice, and the lack of dignity that is the core of this,” according to Frank Jannuzi, the head of the Amnesty International’s office in Washington D.C.

Gao has fully tasted that injustice and indignity: he defended many persecuted groups in China, in the end Falun Gong practitioners, finally attracting the violent ire of the Chinese Communist Party’s security forces and suffering various rounds of detention and brutal torture.

In one incident in 2007 he was abducted and taken to a torture chamber used by the security forces, where he was relentlessly attacked for over 50 days. “Don’t you talk about torture by the Communist Party yet, because we will give you a comprehensive lesson now! You are correct; we torture Falun Gong. Everything is right. The 12 courses we’re going to give to you were practiced on the Falun Gong,” he was told, according to an account he later made public.

“In the following hours of torture I passed out several times, because of a lack of water and food and heavy sweating,” he said. He had toothpicks inserted into his genitals and cigarettes held to his eyes in an attempt to make him give up his defense of human rights and even write articles attacking Falun Gong. He was sentenced to three years in prison in December 2011.

The Defending Freedoms Project will probably adopt other Chinese human rights defenders, since it aims at and is confident of attracting, initially, at least 300 other congressional supporters who will each adopt a persecuted human rights activist.

Amnesty International will vet the candidates, in coordination with the Lantos Foundation and the Commission of International Religious Freedom, and provide lists that members of Congress can then choose from. Amnesty is also organizing the public promotional materials, letter-writing campaigns, and more.

With an initial target of 300 members of Congress each adopting one prisoner, the project seems on track to achieve the goal stated by McGovern, who gave the opening remarks, “to make sure that person is not forgotten.”