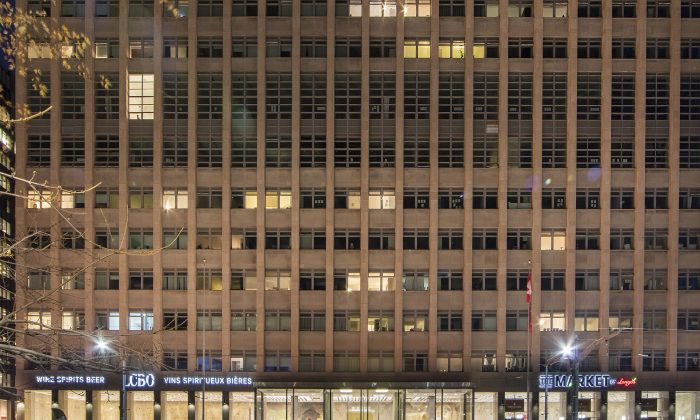 It’s easy to see that the master-planned Imperial Village community will indeed be fit for royalty—or anybody else wishing to embrace a vibrant and enriching lifestyle.

Located in Toronto’s exclusive Forest Hill neighbourhood, Imperial Village is Camrost-Felcorp’s latest development and, when complete by the end of 2018, will include three streamlined high-rises, a collection of luxury townhomes as well as an elegant restaurant tucked into a restored, century-old church façade courtyard.

Best of all, every resident will have access to the Imperial Club, more than 20,000 sq. ft. of amenities that includes a swimming pool, two screening rooms, a virtual golf simulator, squash courts, and an overflow of gym equipment and other amenities that rivals any private health facility.

“When we started planning this project our goal was to create a community,” says Joseph Feldman, development manager for Camrost-Felcorp. “We wanted to bring something special to the area, something that would only enhance the great things this neighbourhood already has to offer.”

A quick tour around the three-acre site on St. Clair Ave. just east of Avenue Rd. at Foxbar Rd. shows that he’s true to his word.

The first phase of the ambitious mixed-use community, the 23-storey Imperial Plaza, is already occupying, with the finishing touches being applied, and the concrete structure of the adjacent luxury residential rental tower is already reaching skyward.

On the west side of the site, Camrost-Felcorp has started dismantling the interior of the former Deer Park United Church—which was de-sanctified in 2008—and is just waiting for the final details from “heritage” architects and contractors, before breaking ground shortly on the 26-storey Blue Diamond Condominiums.

Between Imperial Plaza, the Blue Diamond luxury residential rental tower and the Foxbar townhomes that will soon be under construction, the community will boast just over 900 residences.

It’s an ambitious vision, but if there was ever any doubt about the detail and workmanship to be put into the project, a visit to Imperial Plaza is an example that the developer is eager to please its purchasers and prioritizes quality, luxury, and elegance.

Built in 1957 as the headquarters for the Imperial Oil Company, Camrost-Felcorp has respected the integrity of Imperial’s mid-century modern architecture, both inside and out, preserving and maintaining an important piece of the community’s history.

In the grand lobby, the original marble, granite, a giant wall clock—even a huge mural depicting the “Story of Oil” by York Wilson—are all preserved and in place. The exterior of the structure is simple yet dignified, featuring original limestone and granite, which exudes a certain “strength.”

“The existing building already had so much going for it,” says Feldman. “We kept the best features of the past but added modern living spaces and a selection of amenities that make life simpler and enjoyable.”

Camrost-Felcorp understands the importance of mixed-use developments to Toronto and has put this concept to work within Imperial Village. Feldman is eager to point to the LCBO and The Market by Longo’s outlets housed on Imperial Plaza’s ground floor that are already serving residents and the surrounding community. Feldman further described the future inclusion of a restaurant and retail storefronts within the church courtyard at Blue Diamond.

Both empty nesters and millennials are embracing mixed-used projects as a way of making life simpler with less driving and, in many cases, the reality of not even needing a vehicle and all the expenses that come with it.

Access to public transportation is a key feature in any mixed-use project and Imperial Village is well-serviced by the St. Clair LRT streetcar and is just steps away to the Yonge Subway.

Planners also point out that projects like Imperial Village help “rejuvenate” areas by injecting new life to the surrounding community.

Lesley Kingdon, 34, has been living in Imperial Plaza with her significant other for the past year and calls it a “joy.”

“It’s a great building with great people,” she says. “If I run out of something, I just zip downstairs.”

The couple owned a house in the neighbourhood but found that that they were “just so busy” with work and other activities that a “condominium lifestyle” made more sense.

“It’s a great area for walking. It’s calm with plenty of trees and parks and it’s still so close to downtown,” Kingdon says. “There’s a pool and squash courts and the LCBO and Longo’s are just so handy.”

Officially called The Market by Longo’s, the grocer offers a healthy preservative-free alternative to fast food and recognizes that nutrition, taste, and convenience are of the utmost importance. Described as an “urban market,” it sells organic produce, Ontario meat and seafood, chef-prepared snacks as well as items (such as cheeseboards) that can be used for entertaining.

“It’s just a fantastic set up,” says Feldman, pointing out that the market’s outdoor dining terrace has become a popular spot with the entire community. “The patio is always busy during lunch and it really has brought a new energy to the area.”

He says the LCBO outlet is well stocked and appreciated by building residents, as well as the surrounding community. “It’s a good store,” he says. “They pay attention to what their consumers are looking for and they make sure it’s on the shelves.”

After taking in all the good food and fine wine, it’s good to know the building’s top flight health facility is just steps away—no excuses. Along with the indoor pool and whirlpool spa, the Imperial Club includes a steam room, day lockers, a fitness auditorium with circuit training and cardio equipment, a yoga and pilates studio, a games room with ping pong, pool table and foosball equipment, a private aerobics and training room with an expansive lounge waiting for when you finish the workout.

“This is really going to be a lot of fun,” says Feldman. “No need to drive to a health club or a theatre … it’s all here.”

Feldman added that residents who play instruments will find a “welcoming space” in one of the Club’s two isolated sound studios.

The Imperial Club is run by Innofit—a Toronto-based amenity specialist—to oversee the upkeep of the space and its equipment, as well as being able to connect residents with an array of talented fitness instructors for a wide range of classes. Innofit will also connect club users with registered massage therapists and chiropractors and will be in charge of creating and scheduling activities.

Feldman stresses that though the Club is located beneath Imperial Plaza, all residents of the Imperial Village community will have full use of the facilities.

Blue Diamond condominiums also has its own array of lifestyle. Residents of the condominium will enjoy an expansive library/lounge on the ground floor, a prep kitchen, their own games/media lounge, a reception room, sculpture garden, and two guest suites.

The suites are appointed with brushed chrome hardware, imported porcelain tiles, white soaker tubs, European style vanities, and stone countertops. The building is safe with video cameras and two-way communicator to concierge for selected areas of the underground garage and entry areas.

Due to an increased demand for larger spaces in the condo market, Feldman says Camrost has introduced the Foxbar Collection—a limited release of two and three bedroom condominium suites on Blue Diamond’s upper floors that range from 1,185 sq. ft. to 2,000 sq. ft selling from between $850,000 and $2.695 million. The Foxbar Townhomes (3 bedroom + office and ranging from 2,600 sq. ft. to 3,040 sq. ft.) will feature street access along Foxbar Road and include a landscaped backyard terrace, full basements with direct underground parking garage access, and start at $2.48 million.

Feldman is proud of the entire project but holds a special spot in his heart for the transformation of the historic church.

Plans are being finalized that will have repairs made to the stone facade and a section of the roof removed to provide an open courtyard that will be used in the warm summer months. Additional plans for the church include a glass walled restaurant and a limited retail section.

“It will be a gathering place and a gateway to the rest of the village,” says Feldman. “Nothing is final, but it would be great to see a nice Italian family restaurant.”

For more information on The Foxbar Collection at Blue Diamond, visit the Imperial Village Sales Centre at 1499 Yonge St (just north of St. Clair), Open Monday to Thursday from noon to 6 p.m. and weekends from noon to 5 p.m. For information online, visit www.thefoxbar.ca,  www.bluediamondcondos.ca and www.imperialcondos.ca