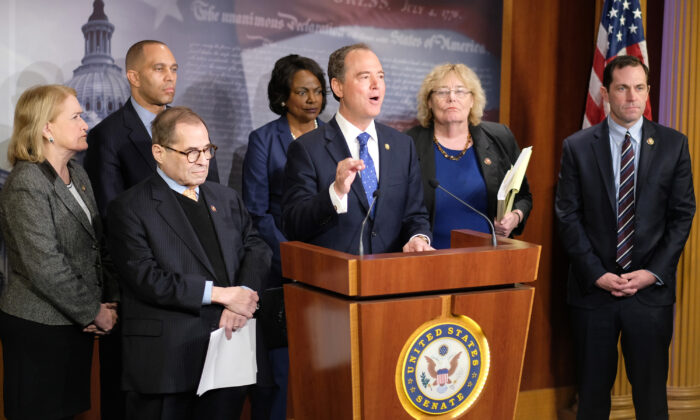 Supporters of President Donald Trump have been blistering in their attacks on the House of Representatives and what they say was a partisan and trumped-up case aimed at overturning an election.

Democrats are similarly livid, claiming a “cover-up” in the Senate as that body decided to hear the House’s case without adding more witnesses of its own. Trump will be acquitted this week, and, despite the anger, the process worked pretty much as our founders anticipated.

Today, we think mostly about the dangers of concentrated executive power, and rightly so. We have lived through a century of executive horrors—from Hitler to Stalin to minor dictators around the world.

In the United States, we have seen an incredible centralization of power over the past century. That centralization began in the early 20th century with the progressive attempt to unite popular opinion with presidential power in order to facilitate a more assertive central government with Woodrow Wilson, Teddy Roosevelt, and then FDR.

Our founders, however, had a very different understanding of the likely place that tyranny would originate. They believed the legislature to be the most dangerous institution. James Madison, for instance, warned of the “legislative vortex” where the people’s representatives would suck all power into their own branch. That’s why the Constitutional Convention divided the legislature into two bodies and made their constituencies so different—the House of Representatives being distributed by population and elected locally and the Senate membership being distributed equally among the states.

Established on such different foundations, the two legislative institutions weren’t meant to easily agree on much. Indeed, when it comes to something as important as the rights of the accused in an impeachment on the one hand and the public interest on the other, the Senate and the House are meant to take very different approaches. In Federalist No. 66, for instance, Alexander Hamilton discussed the importance of those who accuse the president being separated and different from those who would ultimately decide the fate of the president.

Watching the impeachment process, one could see the founders’ framework on full display. The House, as the founders anticipated, proved to be the body of political passion and partisanship. They conducted political hearings, and Rep. Adam Schiff (D-Calif.) and others became stars as they tried the president in the media as well as in their chambers. The Senate conducted the impeachment trial with some requisite dignity and according to established rules. The two bodies were meant to look, think, and act differently from one another, and they did.

In rejecting the House managers’ request to hear additional witnesses, the Senate was actually preserving the separation between those who accuse and those who judge. Juries don’t call witnesses and engage in managing the trial. Judges and juries listen to the best evidence both sides can muster and then make the best decision they can. The Senate decided to listen to the best cases of the accusers and the best defense of the president’s attorneys and make a decision on the charges brought.

In the second charge—that the president obstructed Congress by failing to cooperate with the inquiry—we also see the very foundations of the American constitutional order, which was built on conflict rather than cooperation. The idea of separation of powers requires friction and conflict. It requires tension between the branches and battles that will often be less than appealing to observe. The president resisted the House, and the House decided not to fight the president in court. Rather, the House majority chose to bring charges, and hoped the Senate would align with them to force the executive’s hand.

Of course, one of the big differences between the founders’ intent and our recent experience is the role political partisanship played in both chambers. In the House, no Republicans voted in favor of impeachment, while Democrats almost unanimously voted in favor. In the Senate, the results will surely be nearly the same. In Federalist No. 65, Hamilton predicted that in all numerous bodies, “the demon of faction” will sometimes “extend his scepter,” even in cases as grave as impeachment.

Hamilton didn’t want partisanship to interfere with the proceedings, but he understood that it might.

And so, through our frustrations and anger, we can see the recent impeachment of Trump working pretty much as the founders intended and predicted. The House had the votes to hold hearings and bring charges against a president they felt had done things unworthy of the office and dangerous to the constitutional order. The president, predictably, resisted. The Senate heard the case and will vote on the charges brought by the House. The people who will decide the president’s ultimate fate heard the evidence and will decide who should be president when we hold our next national election in a few months.

This is the separation of powers. This is checks and balances. The system is complicated, and momentous decisions are hard to achieve. And so the impeachment process worked, and perhaps we can all find some solace in that.