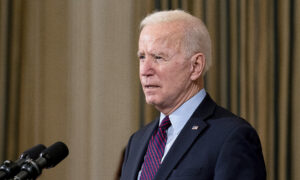 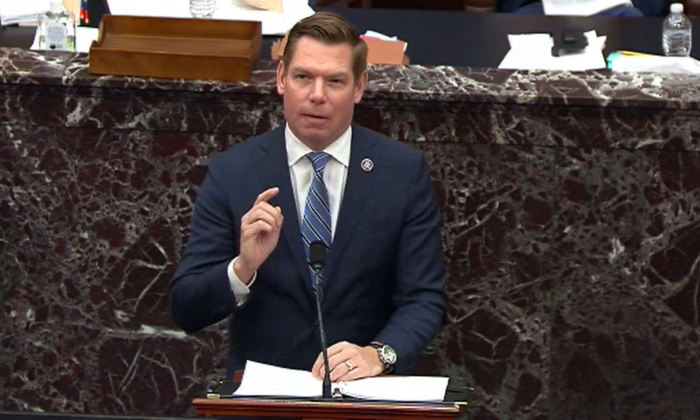 The Democratic House impeachment managers presented no new evidence during a crucial portion of their arguments on Feb. 10 to support the allegation that President Donald Trump incited an insurrection at the U.S. Capitol last month.

The incitement accusation is at the core of the case against the former president, who was impeached by the House last month for allegedly inciting protesters to breach the Capitol building on Jan. 6.

The impeachment managers devoted nearly two hours to lay out their evidence for the alleged provocation, citing Trump’s statements dating back to the spring of last year through his speech on the day of the attack. The presentation included no smoking gun or new revelations to substantiate that Trump knowingly instigated a mob to attack the Capitol.

“We are having a trial on the facts,” Rep. Jamie Raskin (D-Md.), the lead impeachment manager, said at the start of the second day of the trial.

The Democrats split their evidentiary presentation of the alleged crime into three parts: the “provocation,” the “attack,” and the “harm.” The “provocation” leg of the presentation is crucial to substantiate the charge against Trump and is the keystone of the managers’ case. The presentation on Feb. 10 largely rehashed the claims from the impeachment managers’ trial briefs, which focused on Trump’s tweets and public statements.

The impeachment managers wove a narrative alleging that Trump’s legal and rhetorical challenges to the outcome of the election were part of a sinister, premeditated campaign to program a portion of his supporters to commit violence on Jan. 6. Reps. Joe Neguse (D-Colo.), Joaquin Castro (D-Texas), and Eric Swalwell (D-Calif.) presented several selectively edited video clip compilations from Trump’s speeches beginning in spring last year and culminating in the speech the president delivered in Washington on the day of the Capitol breach.

Swalwell, Neguse, and Castro alleged that the statements, which included words such as “fight” and “stop the steal,” amounted to proof that the president conditioned and directed a mob to breach the Capitol.

All of the video clips came from Trump’s public speeches and interviews and were presented without the relevant context. The selective omissions were especially poignant in the presentation of Trump’s remarks from the speech on Jan. 6. The managers never mentioned that Trump told supporters to make their voices heard “peacefully” and “patriotically” when speaking to the crowd about walking over to the Capitol. They instead focused on Trump’s use of the word “fight” when discussing his team’s efforts in questioning the integrity of the election and the need for Republicans in Congress to play tougher at politics.

Unlike the speech excerpts, the Twitter messages that the managers presented appeared in their original form and included Trump’s call for people to go home in peace after the Capitol was breached. Neither Swalwell, Neguse, nor Raskin mentioned that Trump had repeatedly offered to deploy 10,000 National Guard troops to Washington ahead of Jan. 6 to quell potential violence.

According to Trump’s former chief of staff, Mark Meadows, the president’s offers were rejected.

During his presentation, Swalwell clarified that the impeachment managers aren’t accusing all of the people who came to Washington on Jan. 6 of taking part in the violence that occurred at the Capitol. He said that many people came to exercise their First Amendment rights and weren’t to blame.

The Democrats face an uphill battle in convincing enough Republican senators that Trump should be convicted. Forty-four Republicans voted on the first day of the trial that the Senate doesn’t have jurisdiction to try Trump because he’s now a private citizen. Several Republican senators said on Feb. 9 that the vote is an indicator of how the GOP members will ultimately vote on the question of whether the former president is guilty.

Democrats need the votes of at least 17 Republicans in order to secure the supermajority needed to convict Trump. If the vote from the first day of the trial is any indication, the impeachment managers need to change the minds of at least 11 Republicans, a task which even liberal media commentators concede to be virtually impossible.