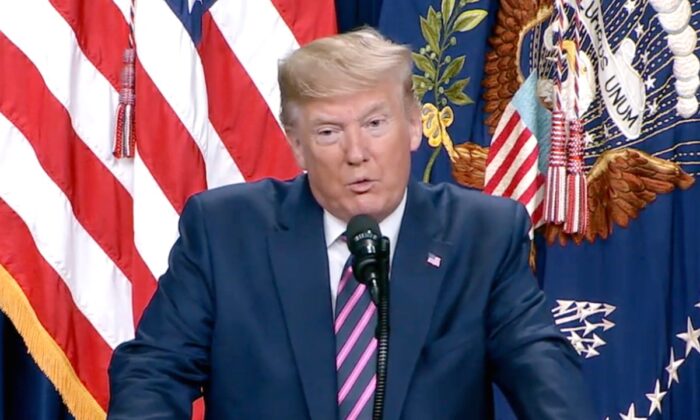 Impeachment isn’t pushing voters away from President Donald Trump, according to a recent poll.

A majority of likely voters, 56 percent, say they will either vote against an incumbent who supports impeachment of Trump or they will ignore the issue entirely in the 2020 election, according to the latest Rasmussen Reports survey.

The number of likely voters who say they’re more likely to vote for an incumbent member of Congress who supports impeaching Trump is greater (41 percent) than those who say the opposite, 38 percent, but another 18 percent told Rasmussen they will ignore the issue entirely.

If those percentages are similar come November 2020, Trump’s chances of winning a second term will be significantly stronger, as will Republican chances of retaking the majority in the House of Representatives and maintaining the party’s majority in the Senate.

Conversely, the strategic assumption of Democrats that impeaching Trump will hurt his re-election chances appears to be fading as a factor the party should count on for 2020 contests.

If Democrats lose their present House majority in 2020 and continue as the Senate’s minority, Republicans will again control the White House and both chambers of Congress, as they did after Trump won the 2016 presidential contest against former Secretary of State Hillary Clinton.

“A plurality (47 percent) of voters still believes the impeachment and removal of Trump from office would be bad for the economy,” Rasmussen said in a statement.

“But 29 percent think it would be good for the economy instead. That compares to 50 percent and 23 percent, respectively, in April, when Rasmussen Reports first asked this question. Nineteen percent say the president’s removal would have no economic impact,” Rasmussen said.

Rasmussen surveyed 1,000 likely voters Dec. 8–9, with a margin of error of plus or minus 3 percentage points, and a 95 percent confidence level.

Rasmussen said Dec. 13 that Trump’s job performance in the White House was approved by 49 percent of those surveyed in its daily tracking poll, and the same percentage disapproved of his performance.

Republican campaign strategist Matt Mackowiak told The Epoch Times on Dec. 15 that “if accurate, these results show that voting for impeachment is riskier than voting against it.”

“In the end, I’m not sure impeachment will matter much in 2020, but there are risks for Democrats here, which is why House Democrats are the only ones feeling pressure.”

Rep. Jeff Van Drew (D-N.J.) reportedly is preparing to switch to the GOP because of the impeachment issue.

But Zach Friend, a former regional director for President Barack Obama in 2008, told The Epoch Times on Dec. 15 that “ultimately, there are three factors that will drive the vote: political, practical, and philosophical. Every representative knows there are political implications (positive or negative) on the vote.”

“From a practical perspective, they also know the issue is dead in the Republican-controlled Senate. But the philosophical is the most important. If you believe there is a constitutional responsibility for oversight and you believe there is enough evidence to warrant a Senate trial, polls and politics will not be primary decision points.”

“Currently, 45 percent of voters approve of the job Trump’s doing, up from 42 percent in late October. Over half, 53 percent, disapprove,” Fox said. “That lands the president almost exactly where he started the year, as 43 percent approved and 54 percent disapproved in January.”

The Fox poll interviewed 1,000 registered voters Dec. 9–11. Pollsters generally consider surveys of likely voters to be a more accurate gauge of public opinion prior to an election.