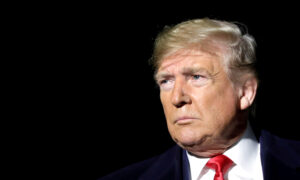 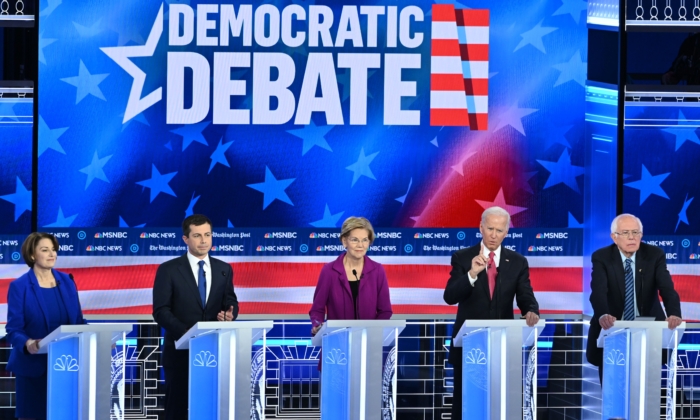 The topic of impeachment dominated the opening segment of the fifth Democratic debate on Nov. 20, just hours after the latest public testimony in the Democrat-run impeachment inquiry.

All of the candidates onstage had called for impeachment proceedings to begin before the House of Representatives voted to authorize the inquiry.

Former Vice President Joe Biden was one of six candidates who were given an opportunity to comment during the debate on the impeachment hearings. Biden’s name is at the epicenter of that investigation because President Donald Trump specifically mentioned the names of the former vice president and his son Hunter Biden during a call with the president of Ukraine, Volodymyr Zelensky.

“I learned something about these impeachment trials. I learned, number one, that Donald Trump doesn’t want me to be the nominee. That’s pretty clear. He held up aid to make sure of that, while at the same time, innocent people in the Donbas are getting killed by Russian soldiers. Secondly, I found out that Vladimir Putin doesn’t want me to be president,” Biden said, before changing topics.

The Democrats running the impeachment inquiry allege that Trump sought to boost his reelection chances by withholding aid from Ukraine in order to pressure the nation into investigating the Bidens. The Ukrainian president and prime minister have both said they were never aware of a link between the hold on aid and the investigation that Trump inquired about.

Four of the Democratic senators—Sen. Bernie Sanders (I-Vt.), Sen. Amy Klobuchar (D-Minn.), Sen. Kamala Harris (D-Calif.), and Sen. Elizabeth Warren (D-Mass.)—also weighed in on the inquiry. In the hypothetical case that the House impeaches the president, the four would be in a unique position of presiding as jurors at the Senate trial of the president, while also campaigning to face him in the general election in 2020.

“I have made it clear that this is impeachable conduct, and I’ve called for an impeachment proceeding. I believe our job as jurors is to look at each count and make a decision,” Klobuchar said.

“We cannot simply be consumed by Donald Trump, because if we are, you know what? We’re going to lose the election,” Sanders said. “What the American people understand is that Congress can walk and chew bubblegum at the same time. In other words, we can deal with Trump’s corruption, but we also have to stand up for the working families of this country.”

Harris, a former prosecutor, appeared to have already made up her mind about the case even though some of the key witnesses, including the president, haven’t testified in the inquiry.

“We have a criminal living in the White House, and there is no question that in 2020, the biggest issue before us, until we get to that tender moment, is justice is on the ballot,” Harris said.

“And what we saw today is Ambassador Sondland, by his own words, told us that everyone was in the loop. That it means it is a criminal enterprise engaged in by the president, from what we heard today, the vice president, the secretary of state, and the chief of staff.”

U.S. Ambassador to the European Union Gordon Sondland testified during the impeachment hearing earlier in the day that Secretary of State Mike Pompeo, Vice President Mike Pence, and acting White House Chief of Staff Mick Mulvaney were all “in the loop” about a connection between Trump’s request for Ukraine to make a public statement about the Biden investigations and the hold on aid to Ukraine.

Sondland later clarified that he was “presuming” when he made the connection, and never heard from anyone that any such connection actually existed.

Warren appeared to accuse Sondland, who contributed $1 million to Trump’s inauguration committee, of buying his way into the administration.

“How did Ambassador Sondland get there? You know, this is not a man that had any qualifications except one. He wrote a check for a million dollars,” Warren said. “And that tells us about what’s happening in Washington, the corruption, how money buys its way into Washington.”

During a July 25 call with Zelensky, Trump inquired about the 2016 ouster of Ukrainian Prosecutor General Viktor Shokin. Joe Biden has bragged about forcing Shokin’s firing by threatening to withhold $1 billion in U.S. loan guarantees. Shokin was forced to resign just weeks after his office seized the assets of Mykola Zlochevsky, the owner of Burisma—the company that paid Hunter Biden to sit on its board.

“The constitutional process of impeachment should be beyond politics, and it is not a part of the campaign. But the president’s conduct is. The impeachable conduct that we have seen and the abuse of power that we’re learning more about in the investigations—but just to be clear, the president’s already confessed to it on television. But that’s just part of what we’ve seen,” Buttigieg said.

Trump and the White House didn’t issue a comment about the comments from the debate.