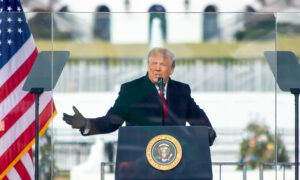 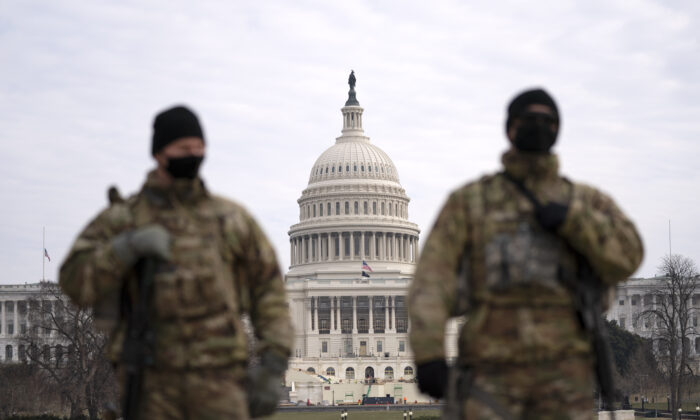 Members of the National Guard patrol the area outside of the U.S. Capitol during the impeachment trial of former President Donald Trump at the Capitol in Washington on Feb. 10, 2021. (Jose Luis Magana/AP Photo)
Viewpoints

The Donald Trump show trial is proving to be a disaster for its proponents.

Rather than disqualifying Donald Trump from being a candidate in any future election or dissuading supporters of the MAGA (Make America Great Again) Doctrine from following him, the show trial has already produced a number of unintended consequences which will come back to haunt its proponents.

They should have recalled that timeless warning well-known to the Founders, that “… for whatsoever a man soweth, that shall he also reap.”

Above all, their show trial has exposed President Joe Biden and especially Vice President Harris to far more serious articles than they ever concocted against Donald Trump.

As articles of impeachment may well be introduced at some future time, perhaps after the mid-term election next year, they constitute two swords of Damocles hanging over the incumbents of both the White House and Number One Observatory Circle.

The lust for impeachment, which emerged from the very moment of Donald Trump’s inauguration, cannot now be put back into the bottle. The Democrats have bequeathed the precedent that there are now no limitations, either temporal or in relation to the target. Worse, they have ensured that, for the foreseeable future, impeachment will be a normal weapon for a losing party.

Andrew Johnson’s 1868 impeachment trial, based on his breach of legislation subsequently found to be unconstitutional, was a close-run thing. Had it succeeded, the Westminster system of responsible government would have been grafted, ungainly, onto the American Constitution.

With a president thereafter almost as dependent on the confidence of Congress as a British Prime Minister is on the House of Commons, this would have destroyed the separation of powers so carefully constructed by the Founders.

This crucial 1868 precedent reaffirming the strict separation of powers has been lost in the almost deranged obsession to impeach Trump by hook or by crook.

The result is that the House may now impeach without evidence and without due process, thus trampling on not only the Constitution but the Magna Carta. All that is needed is a majority. If the trial fails in the Senate, there is nothing to stop the House from trying again.

An obvious consequence of this charade is that any future impeachment proceedings will be far more forensic and will involve serious hearings and the collection of substantial evidence, the House truly mirroring a grand jury investigation, as it failed to do in either Trump impeachment.

Future House Managers are unlikely to behave like the media obsessed amateurs in the Trump impeachment, who foolishly resorted to manipulating evidence and flouting fundamental rules of procedure while not even bothering to attempt to prove incitement according to the law set down by the Supreme Court.

A crucial consequence of the trial was that it allowed the defense team to reveal to America a significant fact that the mainstream media had suppressed.

This was the link between the invasion of the Capitol and Joe Biden and Kamala Harris’s passive and active support for the actions of what was to become the Democrats’ paramilitary arm, the BLM and Antifa, during last year’s eight-months long summer of insurrection.

This was dominated by calls for police defunding, with burning, torching, looting, unlawful occupations, and murdering in Democrat-run cities across the nation, involving at times even attempted secession, as well as unlawful occupations, the destruction of courts and police stations, and a general state of anarchy tolerated by Democrat authorities in the hope that this would weaken President Trump electorally.

That long and bloody summer of insurrection was condoned and even supported by Democrat leaders, including Joe Biden and then-Sen. Kamala Harris. At the very best, there was a failure to tell these criminal offenders to stand down; at the very worst, there was active support in such crucial matters as campaigning for bail and openly encouraging and endorsing even more criminal outrages.

As a result of the trial, many more Americans will have heard the persuasive argument that after eight months of the long summer of insurrection, rather than anything Trump did or said, it was the Democratic leaders and the Democratic leaders alone, who had clearly created a view, at least among radicals, that violent demonstration had become the American norm.

Another unintended consequence is that many more Americans have been exposed to the argument that the Democratic Party has little regard for the Constitution, for due process, and for free speech. If they would do what they did to a president, what will they do to the rank-and-file, including through policy decisions, especially at the executive level? Even the first few weeks of the Biden presidency have already provided rich examples of this.

This, as well as their questionable relationship with the Beijing communists, falls four square into the Founders’ carefully drawn formula for activities expressly forbidden to presidents and vice presidents, that is “Treason, Bribery, or other high Crimes and Misdemeanors.”

In the meantime, the trial also exposed to a wide audience the Democrats’ flagrant disregard of at least the minimum ethical legal and constitutional standards for the presentation of a case, especially the manipulation of evidence.

With the precedent established for future impeachments, it will now be open to the House to investigate the president’s and vice -president’s present and past relationship with the CCP (Chinese Communist Party) and other oligarchies.

On this, the impeachment articles will no doubt be guided by government accountability expert Peter Schweizer’s penetrating studies in this area.

Notwithstanding the view of the more nervous conservative commentators, a further unintended consequence is that more are aware that there is absolutely no evidence to support the mainstream media invention that Donald Trump’s behavior after the election was in any way reprehensible or disgraceful.

Those whose information was limited by the mainstream media will now increasingly realize that he was entitled to make strong reservations about the integrity of the election.

While elites typically dismiss the wisdom and knowledge of the rank-and-file, most Americans are aware that their president swears a solemn oath, to “preserve, protect, and defend the Constitution.” For many, this would be the high point of any inauguration.

From that, they would understand that a president is under a duty to advance the lawful correction of electoral fraud. If there were substantial evidence of fraud, as there clearly was notwithstanding suspiciously hysterical suppression of this by the mainstream and social media, many Americans would think there was nothing untoward in inviting then-Vice President Mike Pence and president of the Senate to be more than just a mere rubber stamp for fraud. Indeed, they would probably think that this was the constitutional intention, as indeed it is.

As to the argument that Trump’s expressions of concern over election fraud is further evidence of incitement is, as defense attorney Michael van der Veen persuasively demonstrated, totally belied by the fact that no one—from Speaker Pelosi to the mayor of Washington, D.C.—behaved in a fashion consistent with the belief that violence was being advocated by him.

“Mr. Trump,” van der Veen rightly insisted, “did not spend the weeks prior to the inauguration inciting violence. He spent those weeks pursuing his election challenge through the courts and other legal procedures―exactly as the Constitution and the Congress prescribe.”

The further result of all this is that even more Americans will believe that proper standards are not being observed in American elections. There will be growing demands for reform.

As to the mainstream media, the broadcast of the trial will have no doubt opened the eyes of many Americans. There was already a widespread lack of confidence in the media; the trial will only confirm to many more that the mainstream media has abandoned the role designed for them by the Founders to become the propaganda arm of the Democratic Party.

One example was when defense lawyer David Schoen played the full interview of the media interrogating Trump over Charlottesville, including his rarely seen express condemnation of white supremacists.

Schoen pithily observed that this might have been the first time the news networks actually played those full remarks in their context.

“How many times,” he asked “have you heard that President Trump has never denounced white supremacists? Now you and America know the truth.”

You and America know the truth.

Many will have recalled the suggestion even by the moderators in the election debates that Trump had never condemned white supremacists. He clearly had.

The broadcast of the defense would have also revealed to a broader public that House Speaker Nancy Pelosi’s snap impeachment was even worse than Stalin’s show trials where at least there was a pretence of due process. Dispensing with evidence, due process, and fairness on the grounds that Trump was so dangerous he had to be removed forthwith, Pelosi then sat on the article of impeachment until the trial could only take place when President Trump was no longer in office.

Viewers who had never heard this before, no doubt wondered why she delayed and why then the Chief Justice refused to preside. Many would have assumed this was because he believed the trial was unconstitutional. They may well have noticed that the presiding officer Sen. Patrick Leahy, already compromized by comment, actually voted. Just from this, any reasonable person would have questioned the fairness of the trial.

This disregard for the most minimal fairness was exposed by Schoen delivering some pithy and amusing gems, which would have instantly explained to viewers that this trial was a disgrace. Examples include these two: “You get more due process fighting a parking ticket than in this charade,” and “You can’t incite what was going to happen.”

Another unintended consequence was that van der Veen was able to demonstrate convincingly that there were four distinct grounds under which Trump should have been acquitted by any fair juror—lack of jurisdiction, denial of due process, breach of the rule that each allegation had to be set out as a separate article of impeachment instead of throwing everything into a “kitchen sink” in the vain hope two-thirds of the Senate would fall for it, and the denial of First Amendment free speech protection to Trump.

The perpetrators of the impeachment would not have expected the defense team to have so convincingly shown that the Trump’s speech did not incite and could not have incited the Capitol riot. As van der Veen demonstrated, emerging evidence that Speaker Pelosi refused to wait to hear has clearly shown that the riot was pre-planned and premeditated by fringe left and right groups.

Yet another unintended consequence will be that a growing number of viewers confirmed in their opinion—and spreading it in their circles of relatives and friends—that a president who achieved more than any other at least since Ronald Reagan was innocent of the charges concocted against him.

This will only strengthen a widespread hope in the hearts of millions that, for the sake of America and of free world, his best political days are indeed yet to come.