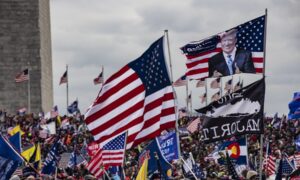 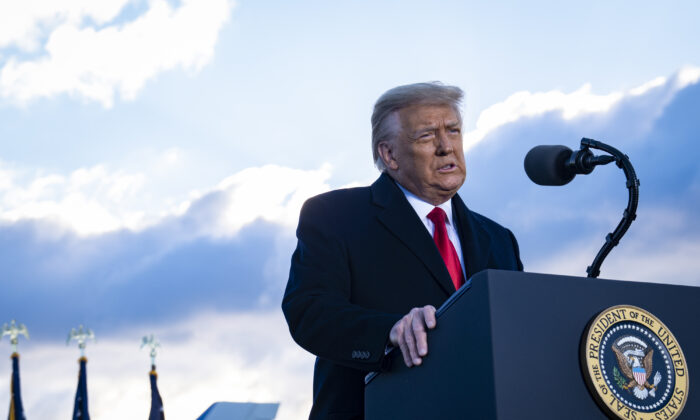 Then-President Donald Trump speaks to supporters before boarding Air Force One at Joint Base Andrews in Maryland, on Jan. 20, 2021. (Pete Marovich/Pool/Getty Images)
Viewpoints

Next week, the political center-stage will be occupied by the ill-fated charade of the impeachment trial. This must be the last gasp of the notorious Democratic inability to focus for long on any political activity except hatred of the ex-president.

For five years, it has been their substitute for policy and for politics itself, and it motivated the Democrats to jam through an impeachment vote with no due process, no witnesses, or evidence, with only 10 of 207 Republicans joining them.

The former president is charged with inciting an insurrection. He urged “peaceful and patriotic” representations to the Congress, no violence, and certainly no violent overthrow of the government (which is what insurrection means).

It’s for this colossal, petulant farce that the Senate is called to remove someone from an office he doesn’t hold for an exhortation he didn’t make to commit an act which no one intended, even the professional hooligans who premeditatedly led the assault on the scandalously under-defended Capitol.

The most interesting aspect of this case is that the ex-president has apparently fired counsel who wished to win the case just as formulated—not guilty as charged, rather than also making the case that Trump was cheated out of his election.

This is the real, main issue of contemporary American politics: The Democrats and all the Republicans who aren’t unambiguous Trump supporters (clearly, a considerable majority of Republicans do support him), can’t accept any serious question of the legitimacy of the election result. That would be too great an impeachment of the system itself.

The facts that Trump was caught flat-footed on election night, and that his legal challenge was helter-skelter and wildly oversold, don’t erase the dubious lopsided vote drops in the middle of the night in Pennsylvania, the infamous consent to the reduction of voter verifiability conceded in the Stacey Abrams action in Georgia, and a great weight of affidavit evidence of systematic fraud, none of which was ever legally addressed.

The state courts were unrigorous in the several states where they were tested, and the Supreme Court ducked the issue, abdicated.

The implications of conceding that it was a rigged election have caused the entire political establishment and almost all of the media (who were nearly unanimous in opposing Trump anyway) to lock arms in support of the integrity of the election.

This is precarious, because it is quite likely that more than the 45,000 votes that were required to flip to deliver Georgia, Pennsylvania, and Wisconsin to Trump could have been found if the post-election inquiries had been conducted and adjudicated thoroughly. Even if Biden won the popular vote, the winning candidate has lost the popular vote on six previous occasions, including 2016.

Samuel Tilden was probably cheated of the election in 1876, but he conceded to Rutherford Hayes on conditions of withdrawal of remaining Union Army forces from the South, the nomination of a Southerner to the cabinet, and increased funding for reparation of war damage in the South. Hayes fulfilled his promises.

Richard Nixon was quite possibly cheated in 1960, but traditionalist patriotic American as he was, he declined to immobilize the nation with a full election challenge, despite President Eisenhower’s recommendation that he do so.

Hillary Clinton wasn’t cheated in 2016, but responded to defeat with the egregious and corrupt actions of politicized intelligence and FBI officials to an extent that remains to be clarified by the Durham special counsel investigation.

The precedent for what seems to be developing is the election of 1824; Andrew Jackson led in the popular vote but didn’t have a majority in the Electoral College, and runner-up John Quincy Adams, and House Speaker Henry Clay, who was the fourth candidate, allegedly worked together to install Adams ahead of Jackson. Jackson campaigned on what he called the “corrupt bargain” for four years and was elected in 1828.

While Trump is no authority on that period of American history, he is an admirer of Jackson. That’s the model he is following.

It’s clear that on the issue of Trump’s guilt or innocence of the charge that has been leveled against him of inciting an insurrection, the great majority of Republican senators will vote to acquit him. If he pushes his defense to the point where those who vote to acquit are deemed to agree that the election result was a dishonest one, it will be a moment of truth for the Republican Party.

In those circumstances, which Trump seems to wish to bring about, I suspect that many Republican senators will vote to acquit, but attempt to express something less than confidence in the election result, without declaring that they believe it to have been fraudulent. Trump is gambling, because if he is convicted, the Democrats could then bar him from seeking public office again. But in such a case, most of the Republicans who would have voted against him would be signing their own political death warrants.

Speaker Nancy Pelosi and her claque may have been tempted into this initiative by pique, hatred, or a tactical belief that smearing Trump all over again made an improved launch for the Biden administration. Or they may simply have become addicted to Trump-baiting.

But their attempt to asphyxiate any serious question that the votes were fairly and justly counted in the presidential election will have failed. If Trump is, in fact, convicted, it will fill him and the majority of Republicans with a spirit of terrible vengeance that will be more easily translated into victory in midterm voting and the next presidential election.

If Trump is barred as a candidate, he will effectively choose the nominee.

Ironically, such a development would deliver the otherwise implausible concept that a large number of Republicans have effectively endorsed: Trumpism without Trump. The congressional and state elections ratified Trump’s policies, even as the presidential election popular vote was won by those who oppose Trump personally, dislike his personality, or simply required an abatement of the strain and drama of the Trump era.

Because the national political media are committed to affirmation of the fairness of the election result and those who question it are thrown off Twitter and threatened with motions to remove them from their present employment—including incumbent U.S. senators—the media’s credibility, which all polls indicate is severely eroded, also is at stake in this impeachment case.

The public appears to be completely unprepared for the sudden meteoric return of Trump drama at its most spectacular and absorbing. The former president will be back sooner than anyone, even his greatest supporters, and certainly, his many detractors could have imagined.

If Pelosi had just let Trump leave quietly, even with a censure vote if she insisted, Biden would be able to get on with his term. As it is, next week, as in all but two weeks in the last five years, the attention of the nation and the world will be on Donald Trump.

His struggle with the Washington political class is not only far from over; it is determinedly approaching an intense climax.