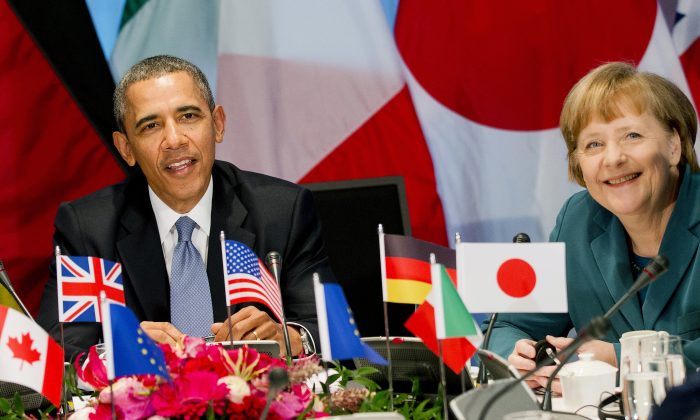 FILE - In this March 24, 2014, file photo President Barack Obama, left, and German Chancellor Angela Merkel, right, smile during a meeting with other G7 world leaders in The Hague, Netherlands. Obama and Merkel are putting on a display of trans-Atlantic unity against an assertive Russia, even as sanctions imposed by Western allies seem to be doing little to change Russian President Vladimir Putin’s reasoning on Ukraine. (AP Photo/Jerry Lampen, Pool, File)
US

Ralph Nader, the former presidential candidate, has suggested that President Obama should be impeached due to unconstitutional actions.

“Oh, most definitely,” Nader said after he was asked if Congress should attempt to impeach Obama.

He said, “The reason why Congress doesn’t want to do it is because it’s abdicated its own responsibility under the Constitution,” according to Yahoo News.

Nader added that Obama’s use of military force in Libya in 2011 was his most “egregious violation of the Constitution.”

But he added that he’s seen some signs of a left-right alliance in Congress.

“On Capitol Hill, I’m seeing more and more in Congress, left and right,” he said. “It was a vote in the House over a year ago over the NSA snooping, it almost broke through … so we’re beginning to see formulations that once they click together, they’re unstoppable.”

He referred to a 2013 vote that was called the Amash Amendment, which seeks to put limits on the National Security Agency.

Obama should be impeached because of the Benghazi “cover-up.”

“We knew in some way that this would go back to the White House,” Vallely said, according to NewsMax. “We needed the proof of it, now we have it. What we have now basically is an invitation to seriously defraud the voting public, which in my opinion is just another indication that we need to impeach President Obama and we need the resignation of [Vice President Joe] Biden and others who were involved in this.”