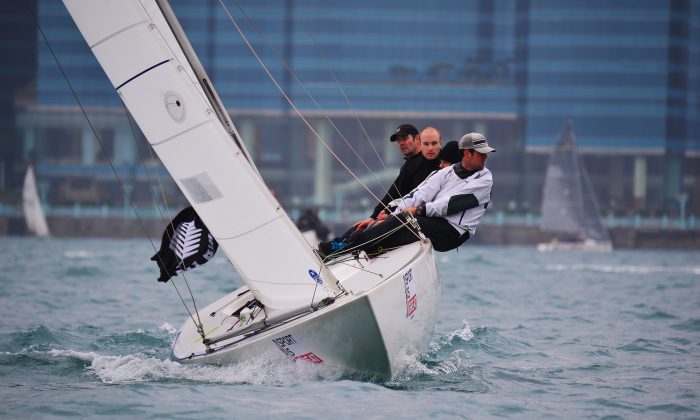 Despite 85 boats entering the race, only 65 boats assembled at the start point at Hung Hom Bay—four did not get off the start line; four did not finish; and one boat retired.

The water was a little choppy at the start, but smoothed out towards LeiYue Mun Gap before becoming quite rough on the way to the turn-around mark of Shek O Rock – where waves were making quite a splash.

One notable rule for the race required all crew of a boat to have the same nationality.

There were four starts raced under the Round the Island Race handicapping system. Start times were 20 minutes apart with the slower boats leaving first. Flying 15’s and Impalas were predominant in Start-1, Etchells and J80’s were the main competitors in Start-2 and the final starts were for two groupings of Big Boats.

Start-1 and -2 got off on time, but as can often happen in Victoria Harbour a tug boat ploughed through the start line just as the gun sounded for Start-3, causing some chaos and consternation—the start was aborted and immediately reset for five minutes later. The boats got off to a good start the second time.

Greg Farrell and crew of Etchells Dream On flying under the New Zealand Flag started 20 minutes after the Impalas, but just beat Boss Hogg to the finish post and took first place by some four minutes on corrected time.

Meanwhile, the first three Impalas finished within a second of each other so Race Officer Sofia Mascia and her assistants had to be on their toes.

The first of the Big Boats, EFG Mc Mandrake (Ireland), finished in 20th spot and well ahead of her next direct competitor Whiskey Jack (England) in 29th place.