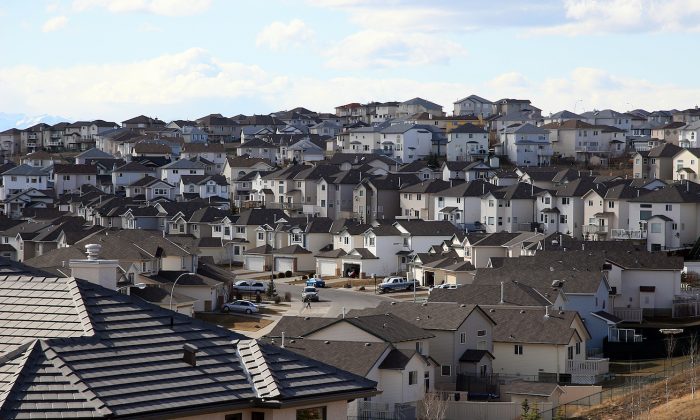 A view of Calgary's Arbour Lake neighbourhood in this file photo. Calgary MP Tom Kmiec says the new mortgage stress test shouldn't be applied the same way in all regions, as not every housing market is the red-hot Vancouver or Toronto market. (Constantine Androsoff/Shutterstock)
Canada

Conservative MP Tom Kmiec wants a study on the impact of mortgage stress tests in cities that don’t have the feverish markets of Toronto or Vancouver, but he says Liberal MPs are ignoring the concern.

Kmiec, who represents the riding of Calgary Shepard, has so far brought forward two proposals to the finance committee, of which he is a member. Both times, the Liberal MPs on the committee turned down the proposals. The reasons cited were the short period of time since new stress test changes came into effect, and lack of time in the committee’s schedule.

“I told them I’m not going to let go of this issue,” Kmiec said in an interview. “It’s too important for them to ignore it.”

The new rules, which came into effect January, mandate that borrowers must qualify for interest rates 2 percent higher than the rate of the mortgage they apply for. The change stemmed from a concern that some Canadians were purchasing homes they might not be able to afford in the years to come, and followed a spell of soaring prices and frenzied market activity in Toronto and Vancouver.

Kmiec said applying across-the-board solutions to all of Canada doesn’t make sense, as not every housing market is the same as that in Vancouver and Toronto. That approach doesn’t take into account the unique markets of smaller cities or the people who live there. In addition, the changes are giving new leverage to the banks over homebuyers, he said, and the situation is forcing some people to choose between higher mortgage rates or walking away from owning a home.

Kmiec said he has constituents in his Calgary riding who are now struggling to refinance their mortgage after the region was hit by the oil and gas slowdown. Most often, they are two-income households that had one income taken away.

These homeowners found new jobs, but with lower incomes. They tried to refinance so that they could lump their lines of credit back into their mortgages, but the new stress test interfered.

When homeowners fail the stress test—which is mandatory when refinancing—they have a few options: (1) they can accept a higher mortgage rate if they want to refinance, (2) they can forget about refinancing, (3) they can get financing from unregulated lenders which have different contract terms than banks, (4) they can sell their home if they really need to.

Kmiec said he’s had two people tell him that they are considering selling their homes. A few more told him they were priced out of the market.

Last Fall, Will Dunning, chief economist of Mortgage Professionals Canada, estimated in a report that the stress test would disqualify 50,000-60,000 people each year from getting the “mortgage they need.” He estimated that about 40,000-50,000 more per year would “be entirely removed from homeownership.”

Kmiec said the finance committee’s own report recommended that the mortgage rules shouldn’t be applied the same way across the country.

“[The report said] to make the rules more selective and tailored to the local market that they’re in, and they didn’t do that.”

In the finance committee meeting, the Liberal MPs said that with upcoming pre-budget work to do, the timing wasn’t good.

Kmiec offered to change his motion to start at the end of the year so other work could be squared away before starting, and emphasized that a subcommittee could handle the work so that there wasn’t a conflict, but that was rejected.

The Epoch Times requested interviews with some of the Liberals on the committee but obtained only one, with chair Wayne Easter.

Easter said that as the chair, he doesn’t necessarily take the Liberal government’s position, and the committee is a “master of its own destiny.” He says he tries to run the committee in a fair and balanced way.

He acknowledges that one of committee’s recommendations last year was for the government to collaborate with their provincial and territorial counterparts to ensure appropriate measures are taken.

“The provinces and feds must work together to ensure the stability in the housing market and that people have the ability to get the mortgages to be able to buy homes,” Easter said.

“The government in its wisdom and the minister of finance, they brought in a more stringent stress test, and that’s one of the things that Tom [Kmiec] wanted to look at.”

He said the Liberal MPs argued that more time is needed to pass after the new measures came into effect in order to evaluate the impact. The other concern was a shortage of time in the committee’s schedule.

“I think in fairness to Tom, I think that’s why he suggested a subcommittee, and I think that has possibilities,” he noted.

“Kmiec sees some difficulties in his own area related to the rules of the changed rules and the stress test and believes that’s impacting the ability of people in his own area and elsewhere to own a home,” Easter added.

“And he’s going to continue to push that point and that’s his right. And I do think at some point the committee or government will have to have a look at that and see, does there need to be changes made.”

For his part, Kmiec said he is going to continue to try to get a motion passed to study the effect of the stress tests.

“Mortgages and home ownership is literally the most important financial decision that a family will make,” he said.

“By stopping people from being able to join the market early in their life, you’re delaying their opportunity to build equity in their home and then to move on into another home or to use their home to borrow from themselves to start a business.”