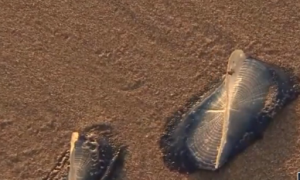 For centuries humans have searched far and wide for a way to live forever. Meanwhile, a species of jellyfish may have already figured out.

The Turritopsis dohrnii is believed to be the only creature in existence capable of continuous regeneration, perhaps forever.

While largely considered immortal, they’re not invincible. They die if they’re burned, removed from water, eaten or stricken with disease. But when not threatened by any outside factors, these gelatinous beings are able to continuously restart their life cycles.

Once they reproduce, they revert back to a sexually-immature polyp. This also includes their tentacles and bodies shrinking, only to be re-grown as the jellyfish matures again.

This metamorphosis has only been observed in a lab setting, thanks to the dedicated efforts of one Japanese scientist, Shin Kubota, who remarks, “We really don’t know their lifespan. They might live forever.”

At the adult stage, they only measure 4.5 millimeters. Even when a jellyfish gets hurt, they heal themselves by returning to the polyp stage for three days, before becoming an adult again.

The species is believed to live in every ocean in the world.

Scientists hope to unlock the key to eternal life for humans by studying the species, but unfortunately they’re not easy to maintain in captivity. The ideal environment for reproduction is still being figured out, and so far only Kubota has successfully maintained a brood of jellyfish.

What medicinal purposes these jellyfish might potentially hold is yet to be seen. And luckily for scientists, the species may never go extinct.