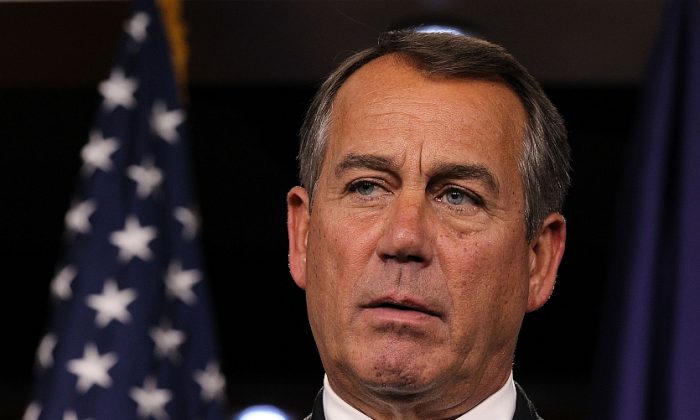 The comment by Boehner, R-Ohio, seemed to indicate that an acceleration of the pace in which the children are returned could be the price for GOP support of President Barack Obama’s request for a $3.7 billion emergency package.

“I don’t know how you can address the problem down there without looking” at changing a 2008 law which currently requires a lengthy hearing process before Central American children can be returned home, Boehner said.

“I don’t know how Congress can send more money to the border to begin to mitigate the problem if you don’t do something about the ’08 law that’s being abused, and it is being abused,” he said.

Some top congressional Democrats including House Minority Leader Nancy Pelosi, D-Calif., andimmigration rights groups, have expressed opposition to speeding up the return of such children, a process that can take months and even years.

Boehner also expressed some doubt about how Congress could quickly craft a package that responds to the problem. He said the problem needs to be addressed, but said Republicans have yet to decide what they’ll do.

Asked whether legislation could be put together before lawmakers begin their August recess, Boehner said, “I would certainly hope so, but I don’t have as much optimism as I’d like to have.”

The U.S. Department of Health and Human Services is evaluating the military base near Tacoma, Washington, to temporarily house about 600 unaccompanied minors who are among tens of thousands arriving at the U.S.-Mexico border.

The News Tribune reports (http://is.gd/e0GrfU) that federal officials discussed local concerns during a conference call Wednesday. They said the youths would not attend public schools at JBLM, would be screened for illnesses and be cared for by contractors.

By law, the agency must house the children until they are connected with relatives or a sponsor while they go through the federal immigration process.