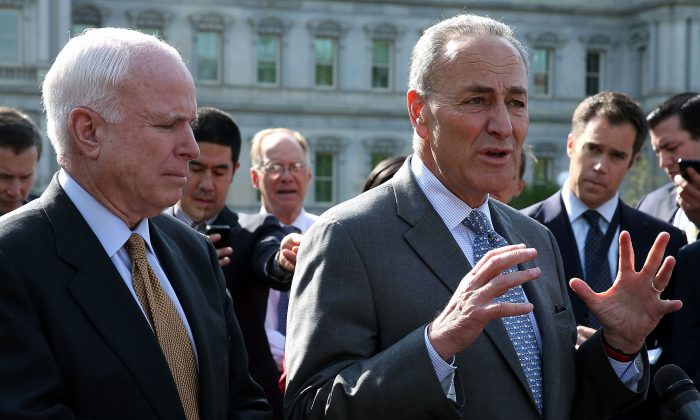 Sen. Charles Schumer (D-N.Y.) (R) and Sen. John McCain (R-Ariz.) outside the White House after briefing President Barack Obama on the contents of their new immigration proposal. (Photo by Mark Wilson/Getty Images)
US

WASHINGTON—The United States made a major move toward Immigration reform Tuesday with President Barack Obama’s endorsement of a Senate bill that has bipartisan support.

The bill seeks to address longtime problems with the immigration system. It includes provisions for visas for skilled and unskilled workers and provides a pathway to legal status for an estimated 11 million undocumented immigrants.

Obama endorsed the legislation following a briefing by Sens. Charles Schumer (D-N.Y.) and John McCain (R-Ariz.), leaders of a bipartisan group of eight senators who have worked to create the bill.

Obama said the bill did not include items he had hoped for but was “consistent with the principles” he believed were important for comprehensive immigration reform.

“I urge the Senate to quickly move this bill forward,” he said in a statement.

The bill was to be introduced to the Senate with fanfare on Tuesday but was delayed out of respect for the victims of the Boston Marathon bombings.

It has been nearly three decades since substantive changes were made to U.S. immigration law. The last attempt, in 2007, failed because of disagreements over whether providing a pathway to citizenship or securing the borders was more important.

This bill by the “gang of eight” senators shows more promise. It provides both a pathway to citizenship for illegal immigrants already in the country and tougher border control.

Under the legislation, undocumented immigrants who have lived in the United States for at least five years prior to Dec. 31, 2011, will be able to apply for “provisional status.”

Provisional status would allow them to work and travel during the 10-year waiting period for a green card. Three years after receiving a green card they can apply for citizenship, making it a 13-year process.

The longer pathway accommodates those who have already applied for legal status under the current system, allowing those applications to be processed before the new bill takes effect.

In an effort to appease those Republicans who believe concessions on legal status encourages illegal immigration, the senators have linked the process to a series of benchmarks on border control.

Border control measures would increase surveillance (including aerial drones) and provide funding for construction of additional border fence, at an estimated cost of $5.5 billion over 10 years.

The bill will require that 100 percent of the U.S./Mexican border be monitored.

The bill proposes an electronic system that will register illegal immigrants who arrive on valid visas and overstay. It also targets employers putting in place an E-verify system, which will screen for illegal workers.

Different categories of work visas have also been proposed including specific visas for high tech and unskilled workers and a guest worker program.

The Senate proposal differs from immigration legislation proposed by Obama and House Republicans in small ways. It does share certain requirements such as paying fines and back taxes, passing criminal background checks, and learning English.

A shorter path to citizenship for DREAMers, children who were brought to the country illegally, is in all three proposals.

Speaking on ABC’s “This Week” program on Sunday Schumer said he expected agreement in the Senate.

“This is a balanced approach that both prevents future waves of illegal immigration and has common-sense solutions,” he said.

Rubio, a rising star in the Republican Party is seen as critical to the bill’s success.