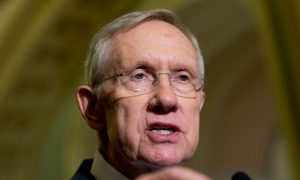 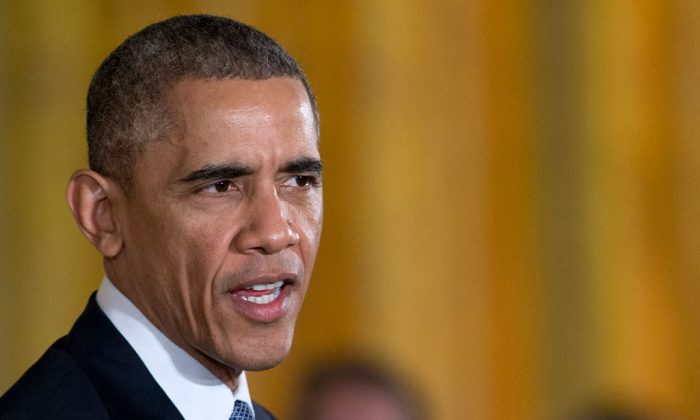 President Barack Obama speaks during the ‘ConnectED to the Future’ event in the East Room of the White House in Washington, Wednesday, Nov. 19, 2014. The president will travel to Las Vegas Friday, a Democratic official said, heightening anticipation that he will announce executive orders on immigration this week. The president is expected to take administrative steps to protect as many as 5 million people in the country illegally from deportation, and grant them work permits. Republicans are vehemently opposed to the president's likely actions, with some conservative members threatening to pursue a government shutdown if Obama follows through on his promises to act on immigration before the end of the year. (AP Photo/Carolyn Kaster)
Politics

WASHINGTON—In a broad test of his executive powers, President Barack Obama declared Wednesday he will sidestep Congress and order his own federal action on immigration — in measures that could spare from deportation as many as 5 million people illegally in the U.S. and set up one of the most pitched partisan confrontations of his presidency.

Obama declared that Washington has allowed America’s immigration problem “to fester for too long.”

The president will use an 8 p.m. EST address Thursday to announce his measures and will sign the executive actions during a rally in Las Vegas on Friday. In doing so, Obama will be taking an aggressive stand that he had once insisted was beyond his presidential power.

As many as 5 million people in the country illegally are likely to be protected from deportation and made eligible for work permits under the plan. They would not have a path to citizenship, however, and the actions could be reversed by a new president in two years. Officials said the eligible immigrants would not be entitled to federal benefits — including health care tax credits — under Obama’s plan.

The 5 million estimate includes extending deportation protections to parents and spouses of U.S. citizens and permanent residents who have been in the country for some years. The president also is likely to expand his 2-year-old program that protects young immigrants from deportation. The administration had considered extending the executive action to parents of young immigrants covered under the 2012 Obama directive, but immigration advocates said they did not expect the parents to be included in the final plan.

“What I’m going to be laying out is the things that I can do with my lawful authority as president to make the system better, even as I continue to work with Congress and encourage them to get a bipartisan, comprehensive bill that can solve the entire problem,” Obama said in a video on Facebook.

Laying the groundwork for his actions, Obama invited 18 Democratic members of the House and Senate — but no Republicans — to dinner at the White House Wednesday. Among the networks airing his Thursday speech will be Univision, which will interrupt the Latin Grammys to carry his remarks, assuring him a huge Spanish-speaking audience.

Obama is to speak at Las Vegas’ Del Sol High School on Friday, a school with a large population of non-English speaking students where Obama unveiled his blueprint for comprehensive immigration legislation in 2013.

Republicans vehemently oppose the president’s likely actions but are deeply divided and have spent much of the week intensely debating how to respond. Some conservative members have threatened to pursue a government shutdown and one — two-term Republican Rep. Mo Brooks of Alabama — raised the specter of impeachment on Wednesday.

House Speaker John Boehner’s spokesman criticized Obama’s planned announcement, noting that the president himself had said in the past that he was not “emperor” and was limited in his ability to act.

“If ‘Emperor Obama’ ignores the American people and announces an amnesty plan that he himself has said over and over again exceeds his constitutional authority, he will cement his legacy of lawlessness and ruin the chances for congressional action on this issue — and many others,” the spokesman, Michael Steel, said.

“There’s one more chance: Just put the bill on the floor, Speaker Boehner,” said Sen. Chuck Schumer, D-N.Y., a lead author of the bill that passed the Senate. “Pass the bill and we will not even have to debate executive action.”

Even Republicans who supported the Senate bill that would have overhauled immigration laws said Obama’s go-it-alone approach would backfire. Still, they cautioned their party colleagues not to overreach in their response.

Sen. Lindsey Graham, R-S.C., who worked on the Senate legislation, said the executive actions would leave the status of millions of immigrants unresolved and would not address what he called a broken immigration system.

“Our response has to be measured — can’t capitulate, can’t overreact,” he said. “Impeachment or shutting down the entire government would be an unwise move.”

Adjustments also are expected to a 2012 program that allowed immigrants under 31 who had arrived before June 2007 to apply for a reprieve from deportation and a work permit. More than 600,000 young immigrants have been shielded from deportation to date under the Deferred Action for Childhood Arrivals program. Removing the upper age limit so that applicants don’t have to be under 31 — one option under consideration — would make an additional 200,000 people eligible.

The beneficiaries of Obama’s new executive action would be treated in the same manner as those immigrants who were shielded from deportation in his 2012 directive, according to one official who discussed the limits of Obama’s action on the condition of anonymity, lacking authority to speak on the record at this point.

Those young immigrants covered by the 2012 action can obtain work permits but are not eligible for food stamps, federal welfare benefits or disability benefits under the Supplemental Security Income program. They also are ineligible for tax credits under Obama’s health care law, though they can buy health coverage at full price on the exchanges created by the law. They may be eligible for public benefits provided by some states.

Some immigrant advocates worried that even though Obama’s actions would make millions eligible for work permits, not all would participate out of fear that Republicans or a new president would reverse Obama’s actions.