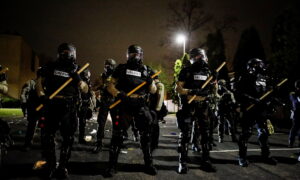 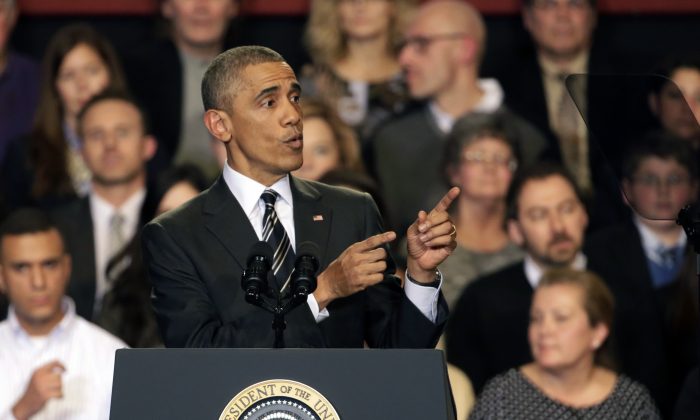 President Barack Obama tries to quiet one of three hecklers as he addresses the crowd after meeting with community leaders about the executive actions he is taking to fix the immigration system Tuesday, Nov. 25, 2014, in Chicago. (AP Photo/Charles Rex Arbogast)
US

WASHINGTON (AP) — Many immigrants in the United States illegally who apply for work permits under President Barack Obama’s new executive actions would be eligible for Social Security and Medicare benefits upon reaching retirement age, according to the White House.

Under Obama’s actions, immigrants who are spared deportation could obtain work permits and a Social Security number. As a result, they would pay into the Social Security system through payroll taxes.

No such “lawfully present” immigrant, however, would be immediately entitled to the benefits because like all Social Security and Medicare recipients they would have to work 10 years to become eligible for retirement payments and health care. To remain qualified, either Congress or future administrations would have to extend Obama’s actions so that those immigrants would still be considered lawfully present in the country.

None of the immigrants who would be spared deportation under Obama’s executive actions would be able to receive federal assistance such as welfare or food stamps, or other income-based aid. They also would not be eligible to purchase health insurance in federal exchanges set up by the new health care law and they would not be able to apply for tax credits that would lower the cost of their health insurance.

The issue of benefits for immigrants who are illegally in the United States is a particularly sensitive one for the Obama administration. As a result, the White House has made it clear that none of the nearly 5 millionimmigrants affected by Obama’s actions would be eligible for federal assistance. The Obama administration first denied younger immigrants who entered the U.S. illegally as children access to health care exchanges and tax credits in 2012, especially disappointing immigrant advocates.

“They were specifically carved out of that, which is deeply unfortunate because it cuts directly against the spirit” of the health care law, said Avideh Moussavian, an attorney at the National Immigration Law Center. “They should have had the opportunity to buy health insurance just like anybody else.”

Less clear until now was their eligibility for retirement benefits for which they would have paid into through payroll taxes.

Describing the administration’s position, one official said Wednesday that any immigrant considered lawfully present and holding a Social Security number would be entitled to Social Security and Medicare upon retirement because they would have paid into the system.

Stephen Miller, a spokesman for Sen. Jeff Sessions of Alabama, a leading Republican opponent of Obama’s executive actions, said making immigrants illegally in the U.S. eligible for Social Security and Medicare “is an attack on working families.”

“The amnestied illegal immigrants are largely older, lower-wage and lower-skilled and will draw billions more in benefits than they will pay in,” he said.

Beneficiaries would have to be of retirement age and have worked for at least 10 years. Immigrants would also be eligible for survivor benefits if the deceased worker had worked for 10 years. For disability insurance, they would have to work for 5-20 years.

A report by the White House Council of Economic Advisers this week concluded that Obama’s executive actions would expand the U.S. tax base because about two-thirds of immigrants illegally working in the United States don’t pay taxes.

But many immigrants currently working illegally still pay into the Social Security system because they have obtained an Individual Taxpayer Identification Number. Moussavian said the number has declined because the Internal Revenue Service has made it harder to apply for the identification number.

The Social Security Administration estimates that out of about 11 immigrants who either entered the U.S. illegally or have overstayed their visas slightly more than 3 million paid payroll taxes of about $6.5 billion in 2010, with their employers contributing another $6.5 billion.

Those payments would not qualify toward the 10 year requirement needed to be eligible for benefits, the administration official said. The official was not authorized to describe the policy by name and spoke on the condition of anonymity.

“It’s one of many reasons why they would want to come forward,” Moussavian said. “Many immigrants have contributed enormously through payroll taxes and income taxes and they go to programs that they can’t currently access.”