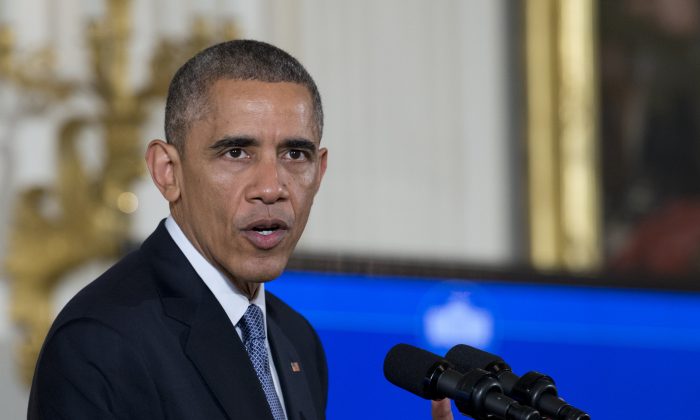 President Barack Obama speaks during the ‘ConnectED to the Future’ event in the East Room of the White House in Washington, Wednesday, Nov. 19, 2014. The conference is with superintendents and other educators from across the country who are leading their schools and districts in the transition to digital learning. (AP Photo/Carolyn Kaster)
US

More Republicans are calling for Congress members to introduce legislation to impeach President Barack Obama should he move ahead with an executive action to give amnesty to as many as 5 million immigrants.

But some have stressed that impeachment–which would essentially “shut down” the government–isn’t being considered.

Obama will give an address to the nation on Thursday about the executive action, which would safeguard millions from deportation, reported the New York Times.

In a White House-uploaded video on Wednesday, Obama said tat “everybody agrees that our immigration system is broken … Unfortunately, Washington has allowed the problem to fester for too long.”

Some Republicans in Congress have said if Obama hands down and executive order, he should be impeached.

“To me a constitutional question means that we have the option of impeachment,” Rep. Walter Jones (R-North Carolina) told Breitbart News a few days ago.

He said impeachment is the best strategy to counter Obama’s executive order.

On Wednesday, Senator Rob Portman (R-Ohio) warned that Republicans would take legal action. “I think there’ll be lawsuits filed, I believe so,” Portman said, but he didn’t mention impeaching the president.

And House Speaker John Boehner said that “all options are on the table,” via HuffPost.

Texas Sen. John Cornyn, a Republican, also suggested that Republicans should be loathe to throw the term “impeachment” around.

“Impeachment and shutting the entire government down takes the focus away from him to us,” added Republican Sen. Lindsey Graham of South Carolina. “There are some people in the conferences that will have their 15 minutes of fame over this. But the rest of us want a Republican Party that can compete across the board in 2016.”