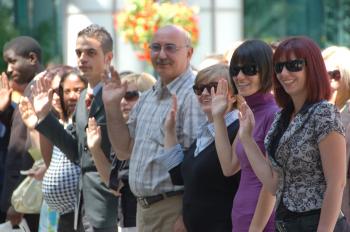 Around a hundred new Canadians gathered in Toronto for a swearing in ceremony on World Refugee Day last June. (Matthew Little/The Epoch Times)
US

Underfunded municipalities across Canada are struggling to meet the needs of new immigrants and cope with changing trends in immigration settlement, according to a new report.

Based mostly on census data, the 60-page report by the Federation of Canadian Municipalities (FCM) stresses the need for more settlement services to help immigrants become established and calls for a new “collaborative approach” on immigration policy between governments.

FCM President Jean Perrault said in a statement that municipal governments should be included in federal/provincial/territorial discussions on immigration, and federal investments in immigrant settlement have not been designed to help meet municipal requirements.

“Municipal governments are where immigrants go first for help, but we are not consulted on immigration policies or programs and we do not have the resources to provide the needed services. It's time for a change,” he said.

The report compared social and economic conditions for immigrants and non-immigrants between 2001 and 2006 in 24 urban communities across the country.

Major cities are finding it more difficult to meet local labour needs as a growing number of well-educated and highly skilled immigrants are choosing to settle in suburbs or smaller cities, the report found.

At the same time, many smaller communities are facing an influx of newcomers who often require additional services, placing more demands on municipalities that are already struggling to fund existing services from a limited property tax base.

“The consensus among municipal governments is they want to attract and retain immigrants—it’s important to the future of the communities. But they’re also struggling with how to provide the appropriate services. That’s the dilemma they face,” said Michel Frojmovic, director of Acacia Consulting & Research and author of the report.

Frojmovic said municipalities want to “open up the lines of communication” so that local governments can have a voice in immigration policy. And while the “sustained per capita funding formula” mentioned in Perrault’s statement is also needed, money is not the priority.

“Presumably at some point money would be a part of the equation but at this point that’s not specifically it at all. It really is two-fold: understanding the issue, which is what this report is about, and really trying to analyze some of the trends and the issues and what they look like in numbers. The other one is to open up a dialogue,” he said.

“We share their concern that some newcomers aren't integrating fast enough. That's why our government has invested $1.4 billion more in integration projects since coming to office and that includes language and job training. Our focus now is on working with the provinces to encourage uptake of those settlement services among new Canadians.”

Carmichael added that CIC relies largely on the provinces to determine where the settlement money should be spent.

“If [FCM] feel that greater collaboration is needed with municipalities then we would encourage that,” she said.
Perrault said the current economic climate brings a new urgency to the situation.

“Like many other Canadians, newcomers will find it more difficult to find and keep employment, which will contribute to other social and family issues. They will need municipal services right when municipalities are struggling with the recession and the growing needs of their communities.”

According to the report, a higher proportion of recent immigrants living in the 24 municipalities earned lower incomes and were less likely to be homeowners compared to their counterparts in the rest of rest of Canada.

The report also found that while immigrants aged between 25 and 54 are twice as likely to have a university degree as native-born Canadians, they are four times as likely to be unemployed.

And while this difference in unemployment rates decreased significantly for university-trained immigrants who had spent over five years in Canada, more established immigrants also faced greater difficulty in securing employment compared to native-born Canadians.