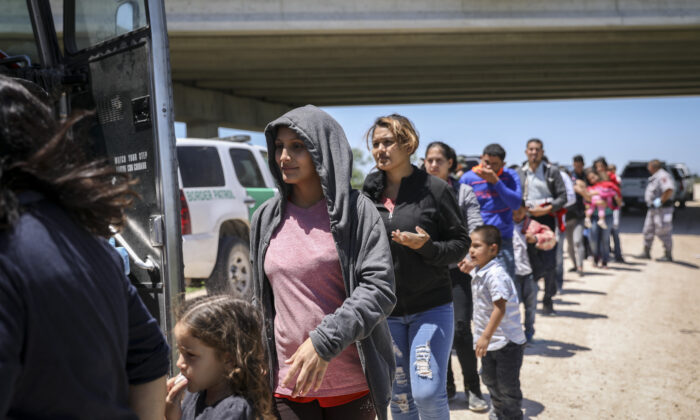 Immigration may boost the U.S. economy overall, but it doesn’t help individual workers, especially those at lower end of the wage scale who face increased competition for jobs from the new arrivals, according to a new report from the Congressional Budget Office (CBO).

The report comes at a time when President Donald Trump has been able to make little progress in changing immigration laws, his signature campaign promise. Democrats, and some Republicans, want illegal aliens to be given amnesty and disagree with efforts to limit family-based immigration, which contributes many poorly educated and unskilled workers to the workforce.

As Congress deals with impeachment and foreign policy challenges, immigration has been relegated to the back burner. At the same time, the president’s efforts to reform the immigration system, crack down on illegal immigration, and strengthen the nation’s border security have generally been met with hostility throughout the federal court system.

The new findings by the nonpartisan CBO, an agency within the legislative branch of the federal government that provides budgetary and economic information to Congress, both challenges and reinforces conventional thinking on Capitol Hill, where lawmakers in both parties view immigration as a net benefit, for the most part.

Workers in low-skilled jobs get hit the hardest, according to the Jan. 9 report titled, “The Foreign-Born Population and Its Effects on the U.S. Economy and the Federal Budget—An Overview.”

“Among people with less education, a large percentage are foreign-born,” the report states. “Consequently, immigration has exerted downward pressure on the wages of relatively low-skilled workers who are already in the country, regardless of their birthplace.”

Immigrants make up roughly half of all newcomers in the workforce each year, which helps to boost the economy.

According to the report, around 47 million people who lived in the United States as of 2018 were born abroad. Of those, about three-quarters were present in the United States legally, including naturalized citizens, lawful permanent residents (green-card holders), refugees, asylum-grantees, and those admitted temporarily for a specific purpose such as extended study or work. The other one-quarter, roughly 11 million people, were present unlawfully, as individuals who overstayed the expiry of their temporary legal status or who entered the country without authorization.

For more than 10 years, the number of overstayers has exceeded the number of illegal border-crossers, which has been declining, according to the report.

Although immigration, legal or illegal, makes the labor force larger, which increases total economic output, it doesn’t necessarily cause increases in output on a per capita basis. The effect of immigration on wages depends on the attributes of the immigrants.

Rosemary Jenks, vice president at NumbersUSA, which seeks to limit immigration, was disappointed by the report.

“They answered the question that we all already know the answer to—whether expanding the labor force expands the GDP [Gross Domestic Product]. They completely failed to answer the actual important question, which is how immigration impacts per capita GDP,” Jenks said, The Washington Times reported.

Giving illegal aliens legal status would give them an opportunity to better themselves, the report said.

“They would be better positioned to ask for more compensation and become likelier to be employed in jobs that best matched their skills, increasing their wages and productivity,” the report says.

Higher immigration levels help the economy because they make the overall labor force more productive, the report says, and immigrants are more innovative than native-born Americans.