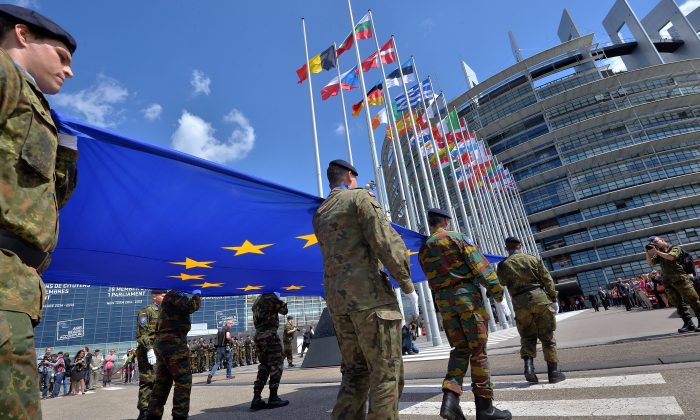 Soldiers of a Eurocorps detachment carry the European Union flag in front of the European Parliament in Strasbourg, eastern France on June 30, 2014. (Patrick Hertzog/AFP/Getty Images)
Europe

Immigration and Terrorism Are the Top Concerns of Europeans

LONDON—A new poll has revealed that terrorism and immigration are the top concerns for Europeans, but shows optimism about the EU’s future.

The twice-yearly Eurobarometer poll by the European Commission found that 38 percent of the EU’s 510 million citizens were most concerned by immigration, although it was mostly in countries that do not have much immigration, like Estonia, the Czech Republic, and Hungary.

Since 2015, the Syria conflict has pushed a surge of refugees into Europe, pressuring the long-criticized current EU asylum system to a breaking point, blunting public appetite for open borders policies, and sparking the election of politicians touting tighter immigration policies.

In 2015, over 1 million migrants crossed into Europe, with 307,000 being granted asylum. Around half of them were from Syria, Iraq, and Afghanistan, raising  concerns that ISIS terrorists were being brought with refugees.

Terrorism was the biggest concern for 29 percent of people in the EU, the survey found. Again, however, it was highest in countries that have not had a single terrorist attack recently, such as Lithuania, Cyprus, Ireland, the Czech Republic, Bulgaria, Poland, and Latvia.

The survey was carried out in late March across 28 EU countries, as well as five candidate countries—the Former Yugoslav Republic of Macedonia, Turkey, Montenegro, Serbia, and Albania, and the Turkish Cypriot Community.

It looks at how people view their governments and the EU itself, examining issues that are linked to the policies of the European Commission such as trade and free movement.

There was a slight increase in the level of trust toward the EU since autumn 2017, rising by one percentage point to 42 percent.

However, 48 percent said they tended not to trust the EU, with 49 percent saying they feel their voice is not heard.

This is up from a historic low in 2013, when trust in the EU dropped to just over 30 percent.

Despite Britain leaving the EU next March, optimism in the future of the bloc is rising. It is now at 58 percent, the highest it has been since spring 2015.

Indeed, it was only Greece and Britain that were pessimistic about the EU’s future.

Despite this, Britain has in recent days stressed that it wants to work closely with the EU even after it leaves the bloc.

David Lidington, a British cabinet minister, told the Frankfurter Allgemeine newspaper that the UK was open to a close partnership with Europe on a crisis intervention force after it leaves the EU.

Regarding the economy, in Italy, France, and Spain, three of the euro zone’s four biggest economies, a majority of people believe the European economy’s situation is “bad.”

This contrasts with 25 other countries, whose citizens believe that the EU economy is “good,” according to the poll.

A large majority supported the single currency, the euro, whose support was unchanged at 74 percent. The highest enthusiasm was in Estonia, with 88 percent, and Ireland and Slovenia both at 84 percent.

In Italy, however, where a euro-skeptic coalition were voted in recently, support for the euro was at 61 percent.

The survey showed that more than eight in ten respondents supported the free movement of EU citizens with the right to live, work, study, and do business anywhere in the EU.

Support for enlarging the EU was middling, with 44 percent in favor, and 46 percent against.

A majority of 58 percent of EU citizens saw the free movement of people, goods and services as the biggest achievement of the bloc, closely followed 54 percent voting for peace among EU countries.