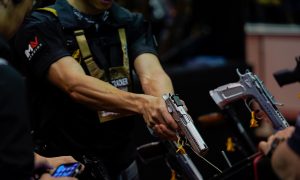 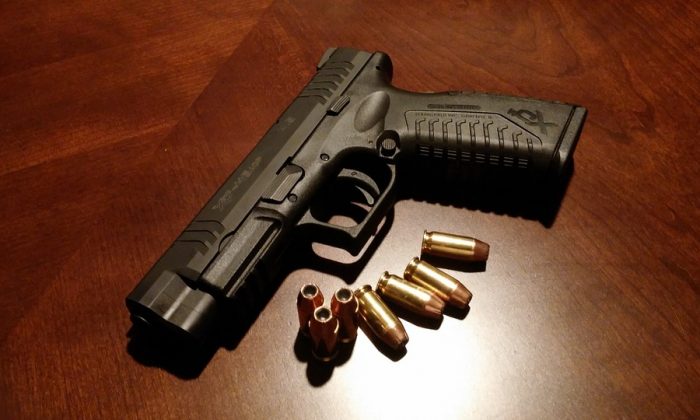 Stock image of a gun. (Brett_Hondow/Pixabay)
US News

Immigration activists who called the police on a supporter of President Donald Trump were frustrated when the man was released after police found that he was legally carrying a firearm.

Immigrant advocacy group Casa Carmelita claimed on Facebook that the man was sitting in a truck covered with stickers supporting Trump and Sen. Ted Cruz (R-Texas) outside the group’s center in El Paso “wearing blue latex gloves and brandishing a knife.”

“Police recovered a loaded gun, ammo, and a bag of white powder from his person,” it added.

Police spokesman Robert Gomez told the Dallas Morning News on Aug. 8 that a “suspicious subject” was “detained and interviewed released” because he was carrying his firearm legally.

“It’s Texas and there’s concealed carry,” Gomez said. “There’s open carry so there are citizens with guns all over El Paso and Texas.”

“Central patrol officers responded to a suspicious subject at the 900 block of Stanton near Casa Carmelita,” the El Paso Police Department added in a statement. “The subject was detained, interviewed and released after it was determined that no criminal offense had been committed.”

The man was identified as Thomas Bartram, 21, said that he was legally carrying a pistol and that he could explain why he was wearing latex gloves and using a knife.

“I was eating prickly pears,” he told NBC. The white powder, he added, was a protein supplement.

Ana Deveze of Casa Carmelita told the broadcaster that activists were “terrified” and “frustrated” that Bartram was outside the center but released without being charged. She claimed that police officers were confrontational with witnesses.

“He has rights,” Deveze said police told her, saying an investigation found he did nothing illegal.

Mourners gathered at a memorial to the 22 people killed in El Paso, Texas last night.

Trump supporters showed up, too. https://t.co/NHggNngKmD

Bartram a day prior told the Washington Examiner that he drove to El Paso from Houston to support the president amid the animus shown against him in the wake of the mass shooting at Walmart on Aug. 3.

“It seemed like the right thing to do, to come out and support Trump. He’s getting a lot of criticism,” he said.

He said he usually open carries a gun but he decided not to because of the recent shooting.

“It’s a funeral so it didn’t seem like the right thing to do,” he said.

Bartram told NBC that he was headed next to Portland, where conservative groups are planning an event on Aug. 17 and Antifa, the far-left extremist group, plans on confronting them.

Portland officials have struggled to contain violence and at the last rally on June 29, Antifa members beat journalist Andy Ngo and at least two other men in broad daylight.

No arrests have been made as of Aug. 9.

Portland Mayor Ted Wheeler, a Democrat, said in a video message posted Wednesday that “extremists from across the political spectrum” have traveled to the city to “commit acts of violence while spreading their messages” and that it appears the same thing will happen on Aug. 17.

“Hear me when I say this: To those people planning to come and inflict violence in our city, we don’t want you here,” the mayor said.

The mayor of Portland is in denial. There are many, many violent extremists who don’t have to “bring” their violence here.

Ngo said in a statement in response: “The mayor of Portland is in denial. There are many, many violent extremists who don’t have to ‘bring’ their violence here. They already live, recruit & organize right here. And under your tenure they’ve only grown more emboldened.”

Wheeler also said in the message that he’s told police to “use whatever means necessary” and “amass whatever resources necessary” to try to prevent violence, claiming “those who break the law [will be] held accountable.”

In an Aug. 2 statement, the Portland Police Bureau said that no group has applied for permits related to the Aug. 17 events, which “are being promoted by individuals or organizations with differing ideologies.”

“Numerous past demonstration events in the City of Portland, involving individuals and groups with differing ideologies, have resulted in criminal behavior by some participants, including but not limited to assaults, vandalism, and weapons violations. Some of these incidents have resulted in arrest while others remain under investigation by the Police Bureau,” it added.

“Based on publicly-available information, the Bureau is concerned events on August 17 may involve persons interested in participating in criminal activity.”