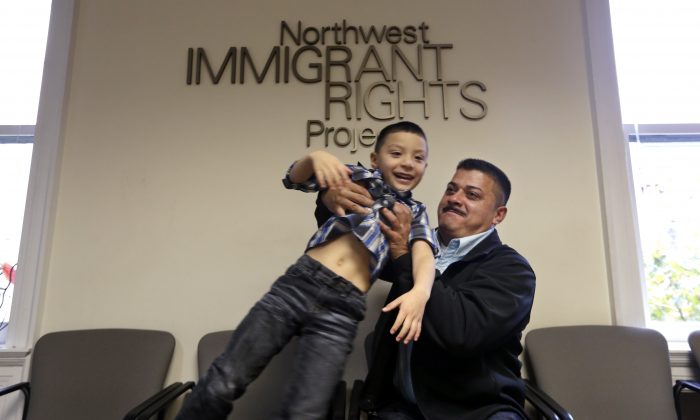 Ignacio Lanuza-Torres playfully lifts his son, Isaiah, 4, as he has his photo taken in Seattle, on Friday, Oct. 17, 2014. (AP Photo/Elaine Thompson)
US

SEATTLE—Lawyers say a sudden about-face by the State Department has left tens of thousands of highly skilled immigrants unable to apply as expected Thursday to become permanent residents, even though many have already paid expensive legal and medical fees to get applications ready.

The immigrants are mostly from India and China, and many work at top tech companies. Several filed a lawsuit in Seattle this week challenging the decision.

They say they have each spent thousands of dollars and the government has jerked them around emotionally, forcing them to cancel trips and take time off work — all for nothing.

The State Department announced Sept. 9 which categories of people in the U.S. could file their final green card paperwork on Thursday. The government revised that notice on Sept. 25, severely curtailing who could apply.