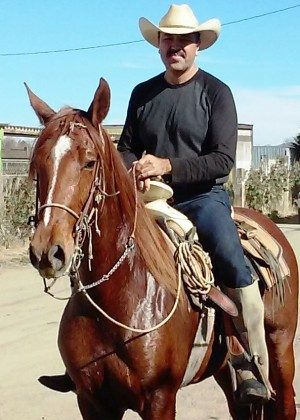 Elio Ruiz and his Andalusian Mare on a Sunday ride.
News

The American Declaration of Independence is a beacon of hope to millions across the globe who want a better life. These words embody the spirit of the nation that created the American Dream:

“We hold these truths to be self-evident, that all men are created equal, that they are endowed by their Creator with certain inalienable rights, that among these are Life, Liberty and the pursuit of Happiness.”

In 1979 Irma and Elio Ruiz, strangers as yet to meet, came to America from Mexico. They were both chasing the American Dream. For Irma, who lived close to the border, it was a lessor challenge than for Elio because she had the knowledge and the contacts to obtain a U.S. work visa.

With their heads full of visions of better lives, Elio, his uncles and two cousins drove north for three days non-stop from the Mexican state of Michoacán. They snuck across the border at San Ysidro, California, and then continued on to Los Angeles.

Irma moved in with her sister and got a job in housekeeping at a Los Angeles hotel. Elio found a place to live and began working as a bellman in the same hotel.

“There’s a very strong work ethic in our families, everybody works,” Irma tells me. “Elio was born on a ranch. He was a ‘Vaquero,’ a cowboy. I think he was born a Vaquero, he loves horses,” she laughs. Elio now rides and trains Andalusian horses on Sundays.

Living with the constant fear of deportation, they worked in the shadows, paid their bills, and sent part of their paychecks home to their families in Mexico. In 1983, they met and fell in love.  In 1986, Elio and Irma were married. That same year, the Simpson-Mazzoli Act, also known as President Reagan’s Amnesty Bill, was signed into law. The young couple applied to become legal residents.

Irma explained that it was not easy to be accepted, “You had to prove you came here to work and were a good person.”

She tells me that they had to fill out an application with reference letters from their workplace and relatives, submit to fingerprinting and a thorough background check, speak some English and know a little U.S. history. Once they passed those requirements, Elio and Irma were given work permits.

“Three years later, we got a letter requesting more work history, proof of residence and more references. Then we got our green cards. We were allowed to apply for citizenship five years after that,” Irma explained. “You had to prove you have value to the country.”

In 1994, Elio and Irma, now with a young family, moved from the Los Angeles to San Diego. Irma was worried about the developing gang situation at the time, “Kids were taking guns and knives to school. When that big earthquake hit; that was enough. I told Elio that we had to get our kids out of there.”

As her sister’s side of the family was in the trucking business, Elio became a driver and Irma worked in the office. By 1996, Elio had found his true calling, that of a finish carpenter. Irma was asked back into the hotel business by her former Los Angeles employer who owned another hotel in San Diego.  Today, Irma is the executive housekeeper at that same hotel. She’s responsible for the housekeeping in 470 rooms and manages a staff of 70. She has worked for the same company for 30 years.

Feisty and proud, Irma says, “The word, ‘benefits,’ is not in our dictionary. In order to survive, we worked. We have never asked for unemployment pay or free medical. The only time I got disability pay was when I was having one of my three kids.”

Elio has now been a finish carpenter for 25 years. They paid for their children’s college education. “Sometimes we struggled, but when you’re trying to do something good, God is on your side,” Irma smiles.

Their son has a degree in civil engineering. One daughter is a licensed veterinary technician who is pursuing a degree in veterinary medicine; their other daughter is an executive secretary.  All five in the family are U.S. citizens; all five are working full time.

From 1881 to 1920, more than 23 million immigrants who came to the U.S.A. needed only a friend or relative to vouch for them and proof of their identity. In 1921, Congress passed the first quota law and they’ve been arguing about immigration in Washington, D.C. ever since.

The polls today show that a huge percentage of Americans do not want another event like the 1986 Simpson-Mazzoli Act, a one-time amnesty, which gave almost 3 million illegal aliens legal status in the U.S. Times are different. There’s a sputtering U.S. economy. Good jobs are scarce – college grads can’t find jobs in their field while major U.S. corporations hire degreed workers from overseas for minimum wage; median household incomes are down, and there’s a general fear that terrorists will cross our borders disguised as immigrants.

Because a plan to secure the borders was not part of the 1986 amnesty bill, some argue that it didn’t work. If the Ruiz family is any indication, the benefits far outweighed the risks at that time.

Regarding another amnesty program, Irma tells me, “It’s difficult. Good people might not apply for fear of not qualifying and the bad eggs just won’t apply. Everything changed in 1998; we lost 37 employees in my department in one day because they had no papers. Every worker had to prove his or her status. Illegals can’t get hired now in companies who have 50 or more employees, we are asked to E-verify everybody.”

Elio and Irma are still in love; still work hard, have three successful children and own their home. Irma is a Notary and says she wants to plan weddings when she retires in 10 years. Elio sings on Saturday nights with a band in a local restaurant.

“He sings in the shower and sings to his horses too,” Irma giggles.

Elio and Irma Ruiz chased and caught The American Dream. Sometimes heroes are those who inspire us by quietly making their dreams come true.