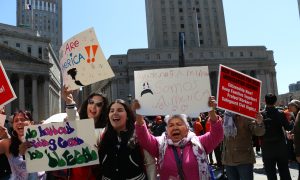 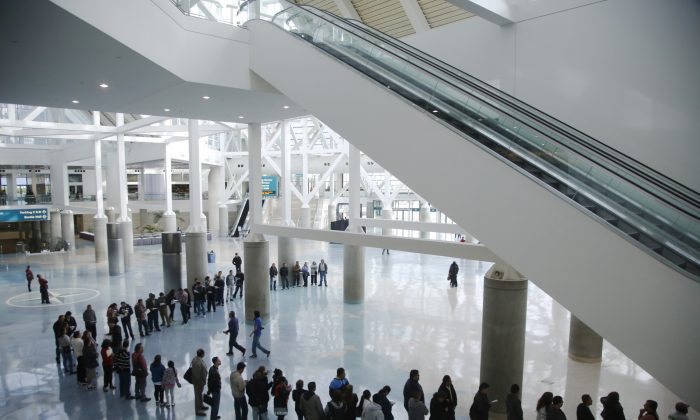 Thousands of immigrants attend the Immigration Relief Education forum organized by the Coalition for Humane Immigrant Rights of Los Angeles, CHIRLA, at the Los Angeles Convention Center on Dec. 13, 2014. (AP Photo/Damian Dovarganes)
US

Immigrants Build Document Trails to Remain in US

The search for documents is on for immigrants who may qualify for a work permit and reprieve from deportation under measures President Barack Obama announced last month. Applicants must prove they were in the country continuously since Jan. 1, 2010 — a tall order for many accustomed to avoiding trails. For critics, conditions are ripe for fraud.

The administration has not said which documents it will accept, but advocates are taking guidance from a 2012 reprieve for immigrants who came to the country as young children. The Deferred Action for Childhood Arrivals program, known as DACA, allows vehicle registrations, baptism records, mortgages, postmarked letters — and those are just some suggestions from the agency that vets applications.

“It’s not the first thing I would use, but if you’re here illegally and getting paid in cash, you may not have as good records as someone paying into Social Security,” he said. “How do you prove you were here?”

Homeland Security Secretary Jeh Johnson told members of Congress this month that fraudulent applications could potentially “undermine the whole process” and he promised to review safeguards. Citizenship and Immigration Services, which vets applications and operates under Johnson’s watch, says it has grown its anti-fraud unit and increased “the scope and frequency” of vetting.

Some advocate a more aggressive approach.

Louis D. Crocetti Jr., who headed Citizenship and Immigration Services’ anti-fraud unit until he retired in 2011, recommends more random interviews of applicants and periodic home visits for recipients of immigration benefits. He said his audits of various visa programs found double-digit fraud rates, including 33 percent for religious workers in 2005 and 13 percent for high-tech workers in 2008.

“Immigration benefits is a production-oriented agency that receives tremendous pressure from the public and the Hill to process applications as quickly as possible,” he said.

The government plans to begin accepting applications by mid-February for immigrants eligible for an expanded version of DACA and by mid-May for parents of U.S. citizens and legal residents. Citizenship and Immigration Services Director Leon Rodriguez said the agency will hire as many as 1,000 officers to process applications. The agency says hires will get several weeks of training.

Attorneys expect children’s birth certificates will be required for parents of U.S. citizens. School transcripts, bank statements and vaccination records also will be in demand.

Irwin Diaz, a San Diego construction worker who came to the country illegally in 1990, would use paycheck stubs if he applies but says employment records are tricky for anyone who worked under an assumed Social Security number.

“Whatever everyone like me is trying to do is see if we’re eligible, see if they have any tickets they owed or things like that,” said Diaz, 31. “It’s people in the shadows.”

School administrators say DACA prepared them. The Los Angeles Unified School District received 16,000 requests for transcripts and enrollment records after the program was announced in 2012, requiring the creation of a new record processing system and hiring. In Houston, hundreds lined up for records each day for months.

“The line would be out the door, down the hall,” said Brita Lindsey, the student records manager at Houston Independent School District.

More than 700,000 people have applied for DACA since 2012, with 87 percent approved, 5 percent denied and the rest pending. Applicants must go to a government office to give fingerprints, which are scanned against law enforcement databases. They are typically not interviewed.

Advocates warn that rigorously grilling applicants may dampen interest in one of Obama’s signature initiatives. An estimated 5 million people are expected to be eligible, but some may worry that admitting they are in the country illegally will expose them to deportation. Permits last three years, and it is unknown how the next president will act.

Application fees, which are $465 for DACA, may also be a deterrent.

“Who’s going to spend $500, plus expose themselves to potential backlash?” Lichter said. “It’s just not going to work. It’s going to sour people.”

Prakash Khatri, Citizenship and Immigration Services’ ombudsman from 2003 to 2008, said he didn’t anticipate “really extensive” questioning. He said there is little incentive to lie because getting caught would erase any prospects of permanent legal status.

Technology advances have made lying more difficult since a 1980s amnesty that was widely perceived to be tainted by document fraud.

“In 1986, we were still dealing with the first generation of computers, no Internet,” Khatri said. “Today if you present a document and you say you lived at a certain place, there are so many records that can reveal whether or not you have stated the truth.”

From The Associated Press. AP writers Christine Armario and Amy Taxin in Los Angeles contributed to this report.