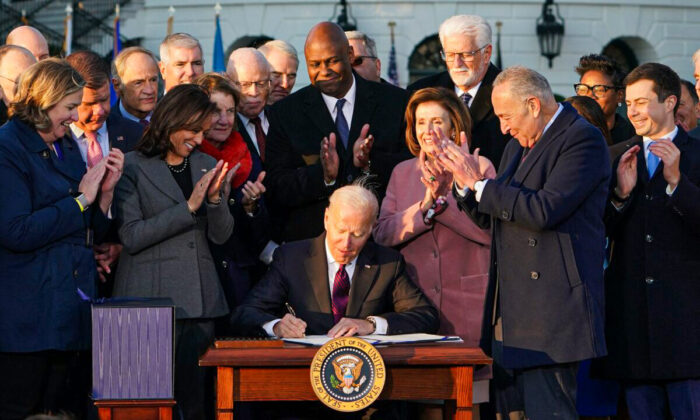 U.S. President Joe Biden takes part in a signing ceremony for H.R. 3684, the Infrastructure Investment and Jobs Act on the South Lawn of the White House in Washington, on Nov. 15, 2021. (Mandel Ngan/AFP via Getty Images)
Companies

Company wants to bid on government infrastructure contracts, but owner is wrong color and gender
By Kevin Stocklin

A Florida small-business owner is suing the Biden administration for racial and gender discrimination in connection with the $1.2 billion Infrastructure Investment and Jobs Act, which Biden signed into law in November 2021.

Christian Buckner, a disabled immigrant, filed a federal lawsuit on July 13, challenging a stipulation in the law that declares him ineligible to bid on $37 billion in government infrastructure contracts solely because he’s white and male. Buckner is represented by the Equality Under the Law Project, which has won all three of its prior racial discrimination cases against the Biden administration.

“If President Biden really wants to help disadvantaged small-business owners, then he should help new businesses struggling to survive or small-business owners who have a disability like me,” said Buckner, who came to the United States to escape communist repression in Romania in the 1970s. “Helping groups based on race and gender is never fair. I expect more from my government.”

As part of the Infrastructure Investment and Jobs Act, $370 billion was allocated for roads, bridges, and other transportation projects. Of that amount, at least 10 percent was set aside for businesses owned by “socially and economically disadvantaged individuals,” which federal regulations define as black Americans, Hispanic Americans, Native Americans, some Asian Pacific Americans, and women. Excluded from this group are white men and men from places such as North and West Asia, North Africa, and the Middle East.

Buckner’s small business, called Project Management Corporation, wants to bid on government infrastructure contracts but will be excluded from those that are set aside for designated groups.

“The U.S. Constitution guarantees equality under the law, meaning that all Americans need to be treated as individuals and not members of racial groups,” Daniel Lennington, Buckner’s attorney, told The Epoch Times. “The U.S. Supreme Court and courts around the country have repeatedly struck down attempts to give preference based on race and gender.”

The Biden administration can’t be faulted for a lack of trying, however. In June 2021, a federal appeals court struck down a Biden administration initiative to use racial criteria in giving federal payouts to restaurant owners. Soon thereafter, a federal court blocked Biden’s attempt to allocate farm relief funds according to race.

During Biden’s presidential campaign in 2019, he spoke out against a U.S. society that he claimed discriminated against women and non-whites.

“It’s an English jurisprudential culture, a white man’s culture,” he said. “It’s got to change.”

Lennington said, “At the core of the Biden administration policies is their firm belief in the theory of systemic racism. They need to implement these quotas and set-asides and preferences in order to satisfy their own belief in this idea that America is a systemically racist place and that America continues to perpetuate racism against non-white individuals.”

Ignoring a consistent string of losses in federal courts, the Biden administration “is going to keep doing it, and they don’t care how many courts strike them down,” according to Lennington.

“They are dedicated to this philosophy,” he said.

While both the federal government and private companies are legally prohibited under the 1964 Civil Rights Act from discriminating on the basis of gender and race, this practice is becoming increasingly common. In April 2021, United Airlines announced that half of its new pilot hires would be women and “people of color.”

“We want to make sure that we are tapping into a big deep talent pool and not limiting ourselves to just one section of the pond,” Chief Communications Officer Josh Earnest said when announcing the new policy.

Race- and gender-based quotas for federal contracts date back to the 1970s, indicating that, after having been in use for half a century, they’re neither narrowly tailored nor are they achieving their goal. The Buckner lawsuit demands that such criteria be removed from the Infrastructure Investment and Jobs Act.