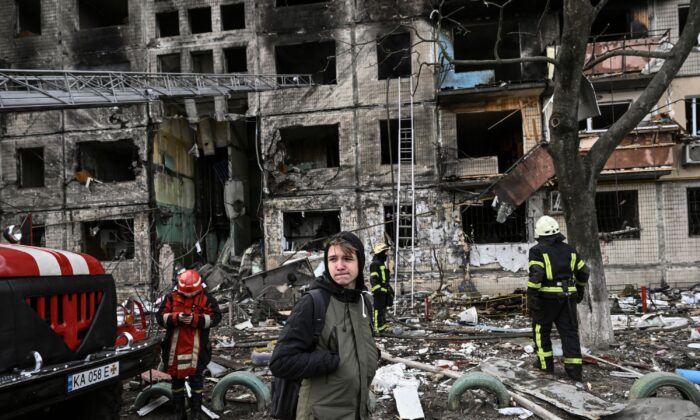 A citizen stands near firefighters in front of a destroyed apartment building after it was shelled in the northwestern Obolon district of Kyiv, Ukraine, on March 14, 2022. (Aris Messinis/AFP via Getty Images)
Thinking About China

Global food, fertilizer, and energy supply chain disruptions caused by the Russia-Ukraine conflict are now driving key geopolitical realignments. It is hardly surprising: food and energy shortages and inflation began to disrupt social stability in many countries within months of the start of the war.

Fertilizer shortages—caused by taking dominant producer Russia out of much of the market—meant that the food crises are unlikely to abate until the late 2023 or 2024 growing seasons.

The campaign by the U.S. Biden administration and the UK Johnson government—in particular, to create blanket sanctions against Russia—backfired by mid-June 2022, and a growing list of governments–hitherto firmly aligned with the United States and the West—indicated that they could not support the sanctions.

They had little choice.

Disruptions in food and fertilizer supplies, given the impact of the COVID-19 disruptions, and then war and sanctions, quickly led to domestic problems in Ethiopia, Egypt, Indonesia, and numerous other markets, to the point where anger was building against the West. Food prices and food shortages jeopardized the stability of many societies. Inflation—also fueled by rising energy costs, a result of the war—meant that many governments were anxious to strike deals with Russia and to defy the United States, often their former ally.

Ukraine’s inability to ship grain was linked to Kyiv’s own policy of mining the port of Odessa to defend against a possible Russian amphibious operation against the port city. This curtailed Ukraine’s ability to export its grains, even though Russia offered—with Turkey—to guarantee safe passage for Ukrainian grain exports.

Some 30 million people in Africa alone were expected to be exposed to possible starvation. That process had already begun by mid-2022. Indeed, the situation contributed to high grain and energy prices for exporters such as Australia, Canada, and New Zealand. Still, their ability to divert supplies to countries such as Egypt or Ethiopia (combined population of some 220 million) was likely to be slower than the demand required. In any event, even delays cause spikes in prices—inflation—and these were already leading to public protests.

It was certain that it would lead to a spike in illegal migrant flows into Europe and the United States.

It was probable that the food crisis in Egypt could lead Cairo to blame the crisis on Ethiopia’s construction of the Grand Ethiopian Renaissance Dam (GERD) and revive calls for war with Ethiopia to divert from the Egyptian domestic crisis.

The follow-on effects of the crisis, leading, for example, to the ban on palm oil exports from Indonesia (to protect its domestic food market), contributed to the urgency of Africa’s food crisis, given that food cannot be readily prepared without cooking oils, and much of the palm oil was from Indonesia. The permutations of the crisis are extensive and profound.

As a result, Africa and the Middle East were, en bloc, abandoning their pro-U.S./West bias and favoring relations with China and Russia. This meant that the geopolitical balance of “Cold War II” was unlikely to be as favorable to the West as it was in “Cold War I” (1945–90). All of this points to the probability that Russia’s economy and strategic influence will, after the present brief period of chaos, rebound to a level significantly beyond, say, 2020 levels.

This has been compounded by the reality that Russia was able to undertake its military action against Ukraine despite the overwhelming U.S./Western support for Ukraine and punishments meted out to Russia due to the Biden administration and Johnson government campaigns. Russia, by surviving these attacks and remaining undeterred by the punishment, thus emerges as a major global power. This is even though its economy is dwarfed by those of the United States, China, and other key powers. The conflict in Ukraine, however messily it began and was initially handled by Moscow, proved that economic power alone was not the key determinant in the global power equation.

What was emerging as the propaganda dust began to clear from the Ukraine war was that even the “Comprehensive National Power” matrix evolved (from Cold War U.S. theories) by the Chinese Communist Party of China (CCP) to determine strategic rankings was inadequate in helping to understand the impact of sovereignty and leadership on strategic outcomes.

The CCP’s belief that the Ukraine-Russia war would make Russia dependent on China has by no means been borne out, even though—particularly in the short term—Russia will find it convenient to move some of its agricultural and energy sales to China because it was unable to service its traditional clientele.

It is significant that the United States, which had rebuilt its position in the Middle East, had, by 2022, lost it again. There was a deliberate move by the incoming Biden administration to disavow the Abraham Accords that the previous Trump administration had achieved, creating an end to the Arab-Israeli divide that had defied U.S. diplomacy since 1947.

Meanwhile, Russia and China had each resurged in the region, despite concerns among some Arabian Peninsula states that Russia’s alliance with the Iranian clerics seemed inimical to the new rapprochement between the Arab states, Moscow, and Beijing. After all, former U.S. President Richard Nixon (1969–74) had successfully maintained a positive balance in its relations with the Arab states and Iran. And, in any event, Arab states were now developing their own rapprochement to varying degrees with Tehran.

The urgency of the food, fertilizer, and energy supply chain and cost crises means that the recovery of trading norms between much of the world and Russia is likely to begin even before the end of 2022. At the same time, the Russian ruble was emerging as a stronger currency with considerable gold backing.

The United States and the UK may have to move rapidly to ensure that the punitive sanctions imposed on Russia and Russian individuals do not backfire and damage the United States and the UK more than it does Russia. By June 2022, the Biden administration was urging U.S. traders to acquire and ship Russian fertilizers to world markets to minimize the impact of the war and its sanctions on the global food market in late 2022 and through 2023.

The pushback against the sanctions against Russia was not confined to the developing world. Germany had already seen its stability threatened by constraints on its importation of Russian energy, coming at a time when its new socialist government lacked the political traction to reestablish nuclear power production to replace oil and gas imports from Russia. Germany, technically not in recession by mid-2022, was facing an economic precipice that was likely to have a sudden and unprecedented impact later in the year.

It was probable that Germany could face its worst economic decline since World War II.

Even the United States, a major food surplus producer, is facing “supply chain” difficulties in 2022, largely created by political moves that damaged the transportation industry. This had already contributed to shortfalls of food products in retail stores, even though the U.S. agricultural sector reportedly had remained buoyant.

However, what has not yet been explained was the steady stream of organized physical sabotage attacks on U.S. food companies—97 in the six months to June 15—which had crippled many of the facilities.

The takeaways include the following:

Ukraine President Volodymyr Zelenskyy, by persisting in fighting the war as though he could defeat Russia, showed strategic shortsightedness by avoiding a negotiating strategy and ignoring the possibilities offered by the Normandy Group (in which France had already been agreed to arbitrate between Ukraine and Russia).

The United States and its allies had pumped massive military resources into Ukraine to persist with its fight against Russia. Still, it was clear that the international support for Kyiv would decline as fighting declined, leaving the Ukraine government isolated. Zelenskyy may have missed his best-negotiating opportunity.