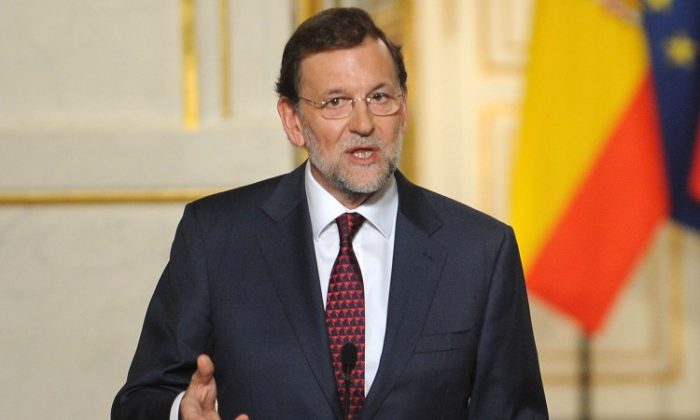 Spanish Prime Minister Mariano Rajoy speaks during a news confrence at the Elysee Palace on Oct. 10 in Paris, France. The bilateral Spain-France meeting focused on the ongoing financial crisis affecting the eurozone, and comes ahead of a summit of EU leaders this week in Brussels. (Antoine Antoniol/Getty Images)
Business & Economy

Immediate Future of the Spanish Economy

Since last month’s presentation of the Spanish General State Budget for 2013, both the finance minister and president of the government have tried to discard the term bailout, for being excessive, and thereby looking to protect the Spanish brand.

There is nothing objectionable about it, but what’s important is that Spain’s underlying situation has not fundamentally changed.

The Spanish Finance Minister Luis de Guindos was in a meeting with international investors on Oct. 4 in London, where he also gave a lecture at the prestigious London School of Economics. He asserted that Spain “has no need for a bailout,” but “in order to have a recovery, it is important to dispel any doubts about the future of the euro.”

One can capture perfectly from the minister’s statement how he chooses to shift responsibility for the situation of Spanish debt and its cost of financing, from Spain to the eurozone as a whole, and especially to the doubts about the breakup of the euro currency.

Also, Mariano Rajoy, at the Summit of Heads of State for Europe on Oct. 5 in Malta, opted to stand together with French President François Hollande and Italian Prime Minister Mario Monti referring, on one side, to the bailout as an “enhanced credit line” for Spain. Yet on the other side, he insisted on an economic, banking and tax integration of the eurozone at the next European Council on Oct. 18. He also suggested that the lack of such integration is indirectly responsible for the Spain’s struggles.

His key message suggested that the slow progress of European integration, generating doubts about the irreversibility of the euro, is what is causing tensions in the debt markets rather than the particular situation of each country.

The argument is not convincing, at least fully, and we will see why.

It seems that both the finance minister and the prime minister, whether denying the need for a rescue plan, or talking about an enhanced credit line, are trying to spread the message that “Spain is different” than the situation of other European countries that had been bailed out, such as Greece and Portugal.

This argument is indisputable based on macroeconomic fundamentals. Spain is not in the situation of Greece or Portugal, but this is not the crux of the matter. The focus should be in the spectacular collapse of a Spanish economy that in recent years was fundamentally anchored to the housing boom and now is unable to generate the revenues needed to support the structure of the country as it is designed.

Clearly, the receding tide caused by the crisis of real estate, dragging with it all its associated sectors, has left the country bare, showing that the Spanish economic model is not sustainable under the current conditions.

This and no other is the reason that the deficit has soared since the crisis erupted in full force in 2009. The housing bubble had burst, and the credit expansion was slowed by the loss of future capital gains expectations that fueled the runaway growth of property prices. This lead to an unemployment rate not seen in decades, and resulted in severe liquidity issues for families, individuals, banks, and businesses.

Many have focused on the reduction of the public deficit. But financing the country today is resulting in cost overruns due to high-risk premiums demanded by debt investors. But blaming the cost increase of financing on the possibilities of a euro breakup, or on the banking integration not progressing seems more like a lack of self-reflection and pure science-fiction.

In fact, if those were the real reasons and no other, one should conclude that all eurozone countries should have their public debt under stress, and this is clearly not the case. Let’s look at Germany, Finland, the Netherlands, and some others whose sovereign debt is rated AAA and is financed at interest rates three to four times lower than Spain.

To revive economic growth, the diagnosis of the current Spanish government and European authorities is the same: reduce the deficit. There are two ways to do this—the state can increase revenue (through taxes) or can reduce expenses (cutting back on infrastructure, eliminating excess spending).

The fact is, increasing the tax burden will only generate negative effects on public consumption and business productivity, the two main pillars on which the country would have to rely to initiate a future growth path.

Many analysts believe that the Spanish state model as it is formed (or managed) now shows up as an expensive luxury and not particularly efficient. One need only take a look at the abundance of news media of almost any ideological line denouncing such unjustified investments—such as unused airports, railway lines without passengers, uncontrolled lavish spending in municipalities—for clues.

At this point, with Spanish debt risk premium at record highs, one should question which intervention is best served.

Most experts believe aid is required. But what will be its magnitude, form, and nuances?

The reality is that the essence of a country’s economy, is that it generates enough activity to pay for its growth and meet its debts. Using figures from the National Statistics Institute of Spain published in September, there are 23.1 million working adults, with 5.7 million unemployed, which means that there are 17.4 million people employed.

One last fact to complete the picture is that Spain, due to the unemployment effects, has the fewest people aged between 16 and 64 who are working. In Spain, that percentage is 61.2 percent, while in France it is 69.1 percent, Germany 76.3 percent, the UK 73.6 percent, and the Netherlands at 77 percent.

Those figures don’t lie. Getting adults working productively is the only self-sufficient way to grow an economy.