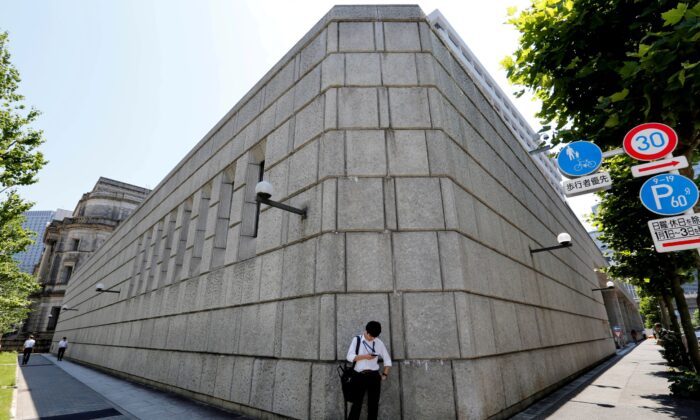 A man looks at a mobile phone in front of the Bank of Japan building in Tokyo, Japan, on June 16, 2017. (Toru Hanai/Reuters)
Asia & Pacific

Japan’s tax revenues in Gross Domestic Product (GDP) have left room for the country to raise some tax rates while scaling down emergency pandemic support, the International Monetary Fund (IMF) said in its report on Thursday.

According to IMF, Japan’s policy response to the pandemic has been “exceptionally strong,” with the country’s GDP forecast to grow at a rate of 3.3 percent this year, up from 1.6 percent in 2021.

“Once the recovery is firmly in place, it will be important to rebuild fiscal buffers gradually and ensure debt sustainability over the medium to long term,” it stated.

IMF recommended that the support scale be adjusted in light of the uncertainties surrounding the pandemic, which could pose downward risks.

“Looking ahead, given the large uncertainty surrounding the pandemic, fiscal policy should be nimble and flexible, adjusting the scale and the composition of support in response to epidemiological and economic developments,” it said.

Japan’s tax revenues in percent of GDP are low in comparison to those of the other G-7 countries–Canada, France, Germany, Italy, the United Kingdom, and the United States–indicating “room for increased revenue mobilization,” the report claims.

“As the pandemic recedes, the authorities should continue scaling down pandemic-related measures, at a pace that does not jeopardize the recovery, including by shifting support towards viable but liquidity-constrained firms and reducing loan guarantee and concessional loan programs,” it added.

In terms of monetary policy, IMF proposed that the Bank of Japan be prepared to lower the policy rate if the underlying inflation momentum remains weak.

“Since a relatively small fraction of bank reserves is subject to negative rates under the [Bank’s] three-tier system, increasing that fraction could help strengthen the transmission of the negative policy rate to money markets and to deposit rates, particularly those of corporates,” it explained.

Another option for the bank is to steepen the yield curve by aiming for a shorter maturity than the existing 10-year yield in order to offset the impact of prolonged monetary accommodation on the profitability of financial institutions, IMF said.

Japanese Prime Minister Fumio Kishida has earlier stated that he does not plan to change the country’s financial taxes on capital gains and dividends for the time being as he intends to pursue other measures to improve income distribution.