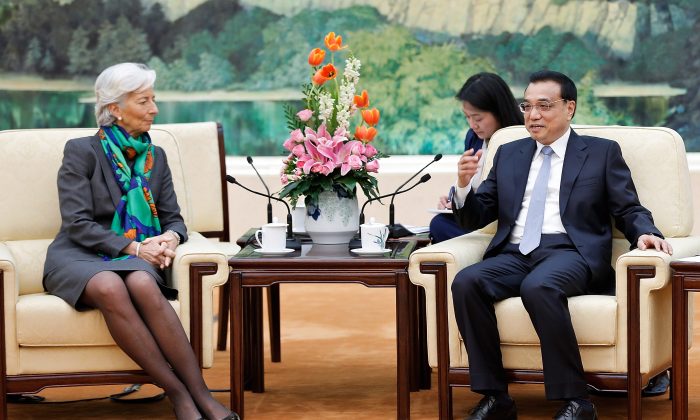 China is in. The International Monetary Fund’s (IMF) executive board confirmed on Nov. 30 it will include the Chinese yuan in its reserve currency basket.

“The Executive Board’s decision to include the renminbi in the Special Drawing Rights (SDR) basket is an important milestone in the integration of the Chinese economy into the global financial system,” IMF Managing Director Christine Lagarde said in a statement.

The decision by the executive board was a mere formality, after IMF staffers already said they supported the inclusion in a Nov. 13 report.

The SDR basket of currencies is the reserve currency of the IMF. Every IMF member gets an allotted share or can buy new rights, but the rights themselves do not have real monetary backing.

They can be exchanged against one or all of the currencies in the basket at the exchange rate the IMF determines. So far, only the U.S. dollar, the euro, the pound sterling, and the Japanese yen are part of the basket.

The Chinese yuan will be included as of Oct. 1, 2016. This is an exception to the policy, which is normally to add a new currency on Jan. 1, the year after the decision. The IMF reviews the composition of the SDR basket every five years.

“It is also a recognition of the progress that the Chinese authorities have made in the past years in reforming China’s monetary and financial systems,” stated Lagarde.

In order to get in, China undertook some reforms in 2015 to make its currency more widely usable, as one of the conditions to be part of the basket.

China allowed greater access to its domestic bond market and liberalized the trading range for its currency, albeit not completely.

However, many insiders think this was a political decision, as the renminbi trails both the Canadian and Australian dollar in use as central bank reserves, for example. Neither of these two currencies are part of the SDR.

Several Western diplomats in Beijing told the Financial Times that the Chinese government lobbied other countries to support the inclusion irrespective of the normal criteria.

Also, the reforms haven’t been tested enough. “If I was the IMF, I would like to see a lengthy period of time where you can see these reforms in practice,” says “Red Capitalism” author Fraser Howie. “You don’t simply have a free trading currency just because you say so. How is China going to respond in times of crisis?”

“On paper, entry into the SDR signifies that the IMF considers the renminbi to be ‘freely usable.’ In reality, China maintains capital controls and the central bank has effectively reinstituted a soft peg to the U.S. dollar since the depreciation in August,” writes Chang Liu, China economist at Capital Economics.

“It is very clear that [IMF staff and management] were willing not to break the rules, but to bend them,” Eswar Prasad, a former head of the IMF’s China team, told the FT. “Given how much the IMF needs China they did not have much choice.”

China has built up leverage over U.S.-led institutions like the IMF for some time.

“I think they want to join the big boys club, meaning the IMF and World Bank. I think the reason why they are establishing new institutions like the Asian Infrastructure and Investment Bank (AIIB) is to put some pressure on the institutions controlled by the United States,” said Ronald Stöferle, managing director at European Asset Manager Incrementum.

However, the actual market impact of the IMF’s decision will be small.

“This may be of symbolic significance to some but we think it will make hardly any difference to currency demand,” writes Liu.

Because the SDR is merely a unit of account and no cash changes hands until IMF members start exchanging their SDRs for renminbi, there won’t be more investment or trading in the Chinese currency. Historically, IMF members almost never use their SDR allocations.

China also won’t get more voting rights within the IMF’s decision-making structure. A change in the quota shares, as they are called, is different from the review of the SDR basket.

There is another more tangible benefit, however.

“China is the only one who hasn’t engaged in a global competitive devaluation. If the yuan wasn’t accepted in the SDR they would go for a one-off large devaluation. This would be a real-economy crisis with the impact on real asset markets,” said Diana Choyleva, chief economist at Lombard Street Research.