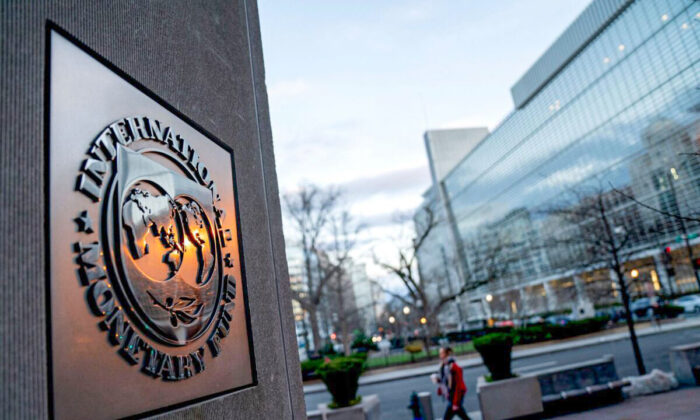 The seal for the International Monetary Fund is seen near the World Bank headquarters in Washington, on Jan. 10, 2022. (Stefani Reynolds/AFP via Getty Images)
Thinking About China

US economy expected to recover sooner than China

China’s GDP growth is expected to fall below 5 percent this year, breaking Beijing’s line of acceptability. The Chinese Communist Party’s (CCP) policies are to blame.

The International Monetary Fund (IMF) on Jan. 25 has cut its 2022 China growth forecast to 4.8 percent, and warned that the effects of the collapsing property market are being felt in other industries. A crumbling real estate sector, combined with Beijing’s “zero-COVID” policy, is reducing mobility of labor as well as diminishing employment.

These factors result in a suppression of private consumption, which has implications for most other types of businesses. Consequently, the World Bank cut its forecast to 5.1 percent, Fitch Ratings reduced it to 4.8 percent, while Goldman Sachs predicts even lower growth of 4.3 percent.

A negative growth outlook has significant political implications for Chinese leader Xi Jinping, as 5 percent has long been considered the CCP’s bare minimum acceptable growth rate. For the rest of the world, slower growth in China means slower global growth.

The IMF also downgraded its growth outlook for the United States because the Federal Reserve is expected to raise interest rates in order to curb inflation. Contractionary monetary policy is a logical step for the United States to take. After two years of pandemic borrowing, spending, and rate cuts, the Fed is trading growth for sustainability.

Beijing, in contrast, is shooting for growth at any cost. Consequently, the People’s Bank of China is one of the few central banks that is cutting interest rates. As a result, the CCP is weakening the yuan and decreasing China’s attractiveness to foreign investment. However, China’s growth is still expected to fall short of the magic 5 percent threshold.

So far, the Biden administration has been unable to pass its spending bill. This is good news, given that U.S. debt, like China’s debt and global debt, has increased dramatically as a result of the past two years of stimulus injections. China, on the other hand, is expected to increase government spending.

Ongoing crackdowns on the tech sector are curbing innovation, discouraging investment, wiping out fortunes, driving down stock prices, and eliminating jobs. And Beijing’s reining in of the property sector is being felt in diverse industries, from banks to construction companies. In one of the clampdowns, Beijing effectively wiped out the tutoring sector, along with millions of jobs. Meanwhile, restrictions on the entertainment sector are causing job losses in the streaming industry.

Xi’s campaign to control the private sector has resulted in young people finding it difficult to obtain work. Job seekers taking the civil service exam have increased by 40 percent. If all of these young people were to find positions with the government, this would swell a bloated public sector, driving up China’s public debt, which already stands at around 300 percent of GDP.

China’s future economic growth is also threatened by declining birth rates, which will ultimately decrease the size of the workforce. In order to restore growth, Beijing has to get the current crop of university graduates to work, while encouraging families to have more children. In a vicious circle, however, unemployment among young adults is one more factor discouraging families from having more children.

On top of Xi’s destructive economic policies, escalating tensions in Ukraine will cause an increase in global energy prices. While inflation is expected across the board, quantifying future economic recovery and GDP growth rates in the United States and in China is difficult to do. Economic health is dependent on COVID policies as well as government reactions to future COVID variants.

At present, Washington is likely to raise interest rates, which should help to dampen inflation. Additionally, U.S. COVID policies seem to be loosening, allowing markets to gradually return to normal. This suggests that the United States should have a quicker, smoother economic recovery than China. The CCP, on the other hand, is cutting interest rates, driving up debt, and restricting the economy with “zero-COVID” policies.