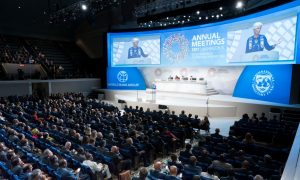 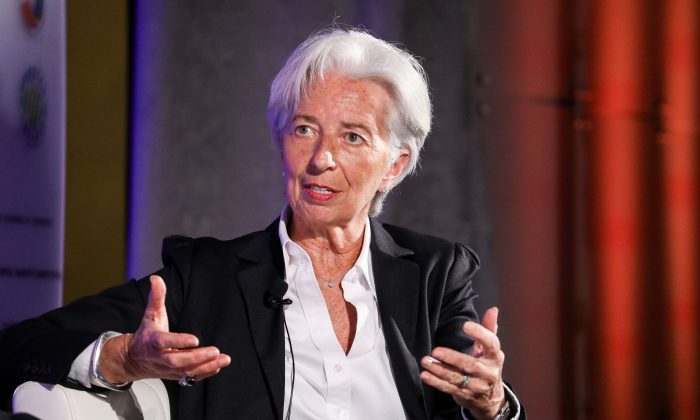 WASHINGTON—While there will be no recession in the near term, the global economy is at “a delicate moment,” according to International Monetary Fund Managing Director Christine Lagarde.

Speaking at the U.S. Chamber of Commerce, Lagarde announced that the International Monetary Fund (IMF) would be releasing new global growth forecasts ahead of its spring meeting in Washington next week.

“Today, if you ask me, the weather is increasingly unsettled,” she said, adding that since January, global economic growth lost further momentum.

Lagarde noted, however, the IMF did not forecast a recession in the near term. In fact, it anticipates a pickup in growth in the second half of 2019 and into 2020.

The recent policy responses, such as the Federal Reserve’s “more patient pace of monetary policy normalization” and increased stimulus in China, have supported the easing of financial conditions, according to her.

In October, the organization cut its global growth forecast for the first time since July 2016 due to slowing Chinese economic growth, U.S.–China trade war, and financial worries in emerging markets. In January, it announced further downward revision, stating that the world economy was growing at a pace slower than expected and risks were rising.

The expected growth in the second half of this year and early 2020 is precarious, Lagarde said, as the economy is vulnerable to downside risks that include Brexit, high debt in certain sectors and countries, trade tensions, and “sense of unease in financial markets.”

The IMF chief also noted that trade tensions would take a toll on both the U.S. and Chinese economies.

High-level trade talks between the United States and China will continue this week in Washington.

“We are focusing heavily on enforcement and intellectual property theft and forced transfer of technology and cyber hacking and that structural group, which is very important as well as lowering tariffs and non-tariff barriers,” he said.

Last week, Kudlow told a group of reporters that Washington could lift some tariffs on China, without giving up too much leverage in trade talks.

The Trump administration believes Beijing has reasons to compromise, as economic woes continue to put pressure on the Chinese regime. Meanwhile, Beijing is expected to implement more stimulus measures to counter the slowing economy.

Under the weight of U.S. tariffs, the Chinese economy weakened last year. The economic growth slowed to its weakest pace in nearly three decades. If both sides fail to reach a deal and trade tensions resume, China’s troubles will deepen, according to analysts.

In 2018, China was the worst performing major stock market in the world, with the Shanghai index falling nearly 25 percent. The index has now gone up 27 percent since the beginning of this year after President Donald Trump signaled progress in trade talks.