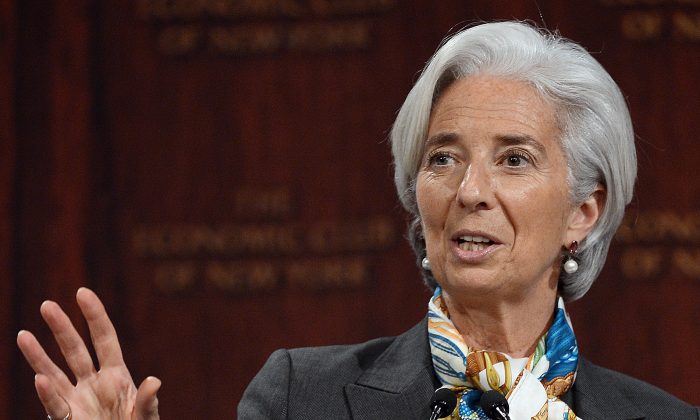 IMF Managing Director Christine Lagarde speaks on Global Policy Actions to get Ahead of the Curve in front of the Economic Club of New York, in New York, April 10. (Emmanuel Dunand/AFP/Getty Images)
News

Success has finally come for a China plagued by economic uncertainty.

GDP growth is falling, the stock market is a mess, and people are moving money out of the country at a record pace. Reform progress remains uncertain at best.

At these trying times, China will welcome support from the international community as it finally got what it wanted: International Monetary Fund Managing Director Christine Lagarde endorsed China’s currency to be included in the fund’s reserve basket. The executive board’s decision on Nov. 30 is a mere formality.

The inclusion in this Special Drawing Rights (SDR) basket is a big nod of approval by the international community. The only other currencies in the basket are the dollar, the euro, the yen, and the pound sterling. The cream of the crop of world paper currencies.

In doing so the IMF, an institution where the United States holds veto power, explicitly acknowledges China’s economic progress. For any country, the currency is a symbol of confidence in the economy.

If internationally recognized, so is the economy, its economic policies, and by extension, also its leadership.

A Matter of Prestige

But besides the point that the IMF is often very wrong in its predictions and assessment of financial markets and economies, prestige is the only thing China is getting out of this one.

Unlike the dollar bill in your pocket, which you can redeem for anything you wish to buy, you first have to convert your SDRs into real currency to then buy something.

Hence the name: Special Drawing Rights. These things are certainly special, because nobody, not even IMF members use them frequently, but they are also drawing rights.

If you hold SDRs, you have right to draw on a member of the IMF to provide you the cash behind the accounting figure of the SDR.

So that’s it. The SDR is an accounting figure, nothing more. The yuan’s inclusion into the basket does not mean central banks all over the world are now rushing to buy Chinese assets.

Because the SDR is not backed by anything, there is no need to. Even in the case of a crisis, one country could simply go to the IMF and say I want to exchange my SDRs for Chinese yuan.

The IMF would then most likely designate China to provide these yuan in exchange for the SDR.

This does not create market demand for yuan and would not influence the exchange rates, because it’s an off-market transaction and the IMF determines the SDR/yuan rate through the weightings in the basket.

In fact, the IMF and the United States might have even won a small battle here.

China has been busy setting up an alternative international financial infrastructure with clearing centers for its currency in financial centers across the globe.

It also launched its infamous Asian Infrastructure and Development Bank this year. A gold exchange in Shanghai and the plans to work on alternative payment systems round out this picture.

By trying to get China into the existing framework, it will be easier to control, even if it is impossible to completely stop it from building an alternative infrastructure.

First of all, China will have to be more transparent in its reporting. It will have to disclose the breakdown of its currency reserves, currently a complete mystery. It will also have to regularly update its gold holdings.

In addition, the IMF can force China to accept SDRs and exchange them for any other currencies, not a great position to be in.

On the other hand, the IMF also won’t relinquish any of its power. The allotment of voting rights is completely independent from the SDR basket.