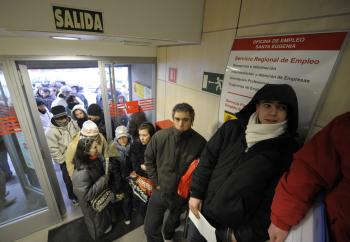 People queue as they wait for a government job center to open in Madrid on Jan. 22. The number of unemployed workers in Spain soared to a 12-year high point of more than 3 million in 2008 as the economy reeled from the collapse of the property market and (Philippe Desmazes/AFP)
Business

If the current global economic crisis continues to deteriorate, more than 50 million people worldwide could be forced out of employment in 2009, totaling some 200 million workers globally, the International Labor Office (ILO) announced on Jan. 28.

This worst case scenario will bring the global unemployment rate up to 7.1 percent. The rate is speculated to be even worse in developed economies like the European Union.

On a regional basis, the largest increase in unemployment is accounted for by the developed economies—such as North America, the European Union, and Australia—as a result of the economic recession triggered by the sub-prime loan disaster and the ensuing global financial crisis. The size of these developed economies makes its impact on other regions of the world highly significant.

The people of the developing countries in Africa and the Middle-East, which are poverty stricken and enduring unemployment rates above 11 percent, could be hit severely because foreign aid is likely to be reduced.

ILO Director General Juan Somavia said, in conjunction with the release of the report, the worst case scenario is not exaggerated but realistic. Many governments are taking measures to prevent the situation from turning into a social destabilization factor with political and security implications.

Social unrest in some countries in Eastern Europe is already being reported by the mass media.

On Jan. 26, violent demonstrations by citizens forced the Iceland government to resign. The angry citizens blamed the government for driving the once prosperous country into bankruptcy and high unemployment. In Greece, Lithuania and Latvia, demonstrations triggered by economic issues turned violent.

Forecasts by the European Commission released on Jan. 19 show a loss of 3.5 million jobs in 2009, as the economies plunge further down, bring the unemployment rate to 8.75 percent. European governments have pledged to make jobs the highest priority. The ILO report appeals to governments to act even more decisively on the issue.

The ILO report on the global job crisis, resulting from the economic downturn, is supported by another report on the world economic outlook, released on the same day by International Monetary Fund (IMF). According to the IMF, the global economic growth in 2009 will drop to almost a standstill at 0.5 percent before a turnaround in 2010.