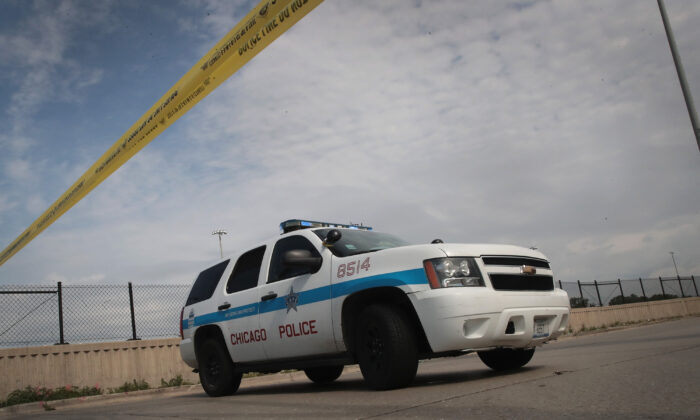 Police investigate the murder of a young man found shot to death in the back seat of a bullet-riddled car in Chicago, IL, on June 30, 2017. (Scott Olson/Getty Images)
Crime and Incidents

Illinois Woman Charged in August Fire Deaths of Her 5 Kids

EAST ST. LOUIS, Ill.—A woman has been charged with child endangerment in the August fire deaths of her five young children, who she allegedly left in a southwest Illinois apartment without adult supervision.

Sabrina Dunigan, 34, of East St. Louis, faces five felony counts of endangering the life/health of a child in St. Clair County, and online court records indicate there are pending grand jury actions in the case, the St. Louis Post-Dispatch reported.

Charging documents said the children had been left without adult supervision, which was a proximate cause of their Aug. 6 fire deaths, according to the Belleville News-Democrat.

Deontae Davis Jr., 9; 8-year-old twins Neveah Dunigan and Heaven Dunigan; Jabari Johnson, 4; and Loy’el Dunigan, 2, were killed. Four of them died at the scene and the fifth died at a local hospital.

Dunigan had not surrendered to police or been served with an arrest warrant as of Thursday afternoon, said Chris Allen, a spokesman for the St. Clair County State’s Attorney office.

Dunigan’s father, Greg Dunigan, told the St. Louis Post-Dispatch on Thursday that he cannot believe authorities would charge her with a crime after everything she lost.

“Why are they trying to do this to her?” he said. “She done lost all she can lose already. Why they want to take the rest away, meaning herself? She don’t have nothing left.”

Assistant Fire Chief George McClellan of the East St. Louis Fire Department said shortly after the August fire that the children were home alone on the second floor of a two-story, brick building.

He said Sabrina Dunigan left briefly to pick up her boyfriend from work and she reported the fire after she and her boyfriend arrived at the apartment.

Sabrina Dunigan has said she suffered burns on her arms and feet during her futile attempts to reach her children.