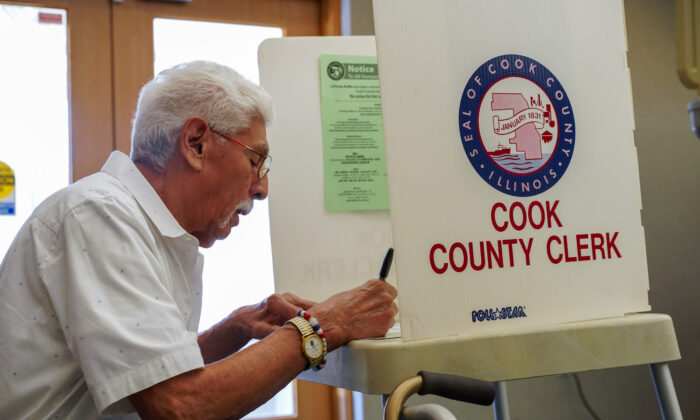 Alice Mister, a resident of Palos Hills, told The Epoch Times that abortion is now her top concern and that she thinks more people will be energized around this issue throughout the midterm election cycle.

“We have had it for over 50 years and now they just took it away. I believe a woman should be able to decide what they are going to do with their body,” Mister told The Epoch Times.

Newman, the incumbent of the nearby 3rd district, was moved out of her district after Illinois lawmakers redrew the map last year. She chose to run for reelection in the 6th district instead, facing two-term House Rep. Sean Casten—the only primary fight among incumbent Democratic House members in the state.

Both incumbents support abortion and are endorsed by the Planned Parenthood Action Fund and NARAL Pro-Choice America.

For Veronica Khachatryan, abortion is also her top issue, and it is an issue that she thinks will energize people on both sides.

Khachatryan is of Armenian descent, and treasures American freedom, she told The Epoch Times.

“Personally, I support abortions. And I feel lucky to be in America where people can have different ideas, debate them, and respect each other,” Khachatryan said.

She said she voted for Democratic candidates in the primary.

Elevera Werr, on the other hand, is a pro-lifer and voted straight Republican ticket in the primary.

“We really need whole new blood, a whole new regime here. Look at the crime in Chicago, I would not walk on the streets in Chicago even if someone pays me $1,000,” Werr told The Epoch Times.

In 2022, the total number of shootings and murders went down in Chicago compared to 2021, according to Chicago police statistics. But a few high-profile, never-happened-before shootings in the renowned Theatre District and tourist sites downtown had people on edge.

Werr is a supporter of former President Donald Trump. Trump’s endorsements played an important role in her consideration of candidates, she said.

She voted for Darren Bailey, a conservative state senator running for Illinois governor. She made up her mind on this one after Trump endorsed Bailey on Saturday at a southern Illinois rally.

Bailey is contending in a six-way Republican primary race, the winner of which will face Gov. J.B. Pritzker in the fall.

It is one of the most expensive midterm races the nation has seen this year. Three billionaires played big, with shipping supplies magnate Richard Uihlein putting in at least $17 million in support of Bailey, and Illinois’s richest man Ken Griffin putting in $50 million in support of moderate Republican Richard Irvin, according to filings with the Illinois Board of Elections.

Plus, according to multiple media outlets, the Pritzker-supported Democratic Governors Associations put in tens of millions in support of Bailey, the rationale being that Pritzker could easily beat pro-Trump Bailey in a blue state like Illinois.

Pritzker, a billionaire member of the family that owns the Hyatt hotel chain, contributed $90 million to his reelection campaign in January, according to a quarterly report filed with the state.

As for local resident Charles McCloud, he has lost faith in both parties for decades.

“I have not voted for a jackass or an elephant for 40 years. It is time for big changes. Things would not get any worse,” McCloud told The Epoch Times.

He said his biggest problem with the Democratic or Republican politicians is that they lie too much and indulge in personal attacks. He voted for Libertarian candidates in the primary.

“Honesty matters most to me. If either party has an honest candidate, I’ll vote for him,” he said.